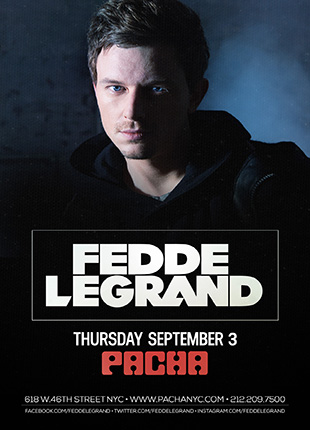 Internationally acclaimed producer/DJ Fedde Le Grand returns to the Big Apple on Thursday, September 3 for a showcase at the notorious Pacha NYC nightclub.

Fedde is an electronic dance music (EDM) veteran, familiar to many for his extensive discography consisting of hits “Put Your Hands Up 4 Detroit,” “Let Me Think About It” vs. Ida Corr, “Metrum,” “Sparks” with Nicky Romero feat. Matthew Koma, and his 2015 smash single “Cinematic” feat. Denny White.

Le Grand has spent his 2015 touring the globe and headlining major music festivals including Ultra Music Festival, Tomorrowland, and Sensation.

On October 16, Fedde heads to the annual Amsterdam Dance Event in the Netherlands.

The Nocturnal Times has partnered with Pacha NYC to give away a pair of VIP tickets for the Thursday night event in the city that never sleeps.

Enter to win two free VIP tickets for Fedde Le Grand at Pacha NYC on September 3 from The Nocturnal Times: