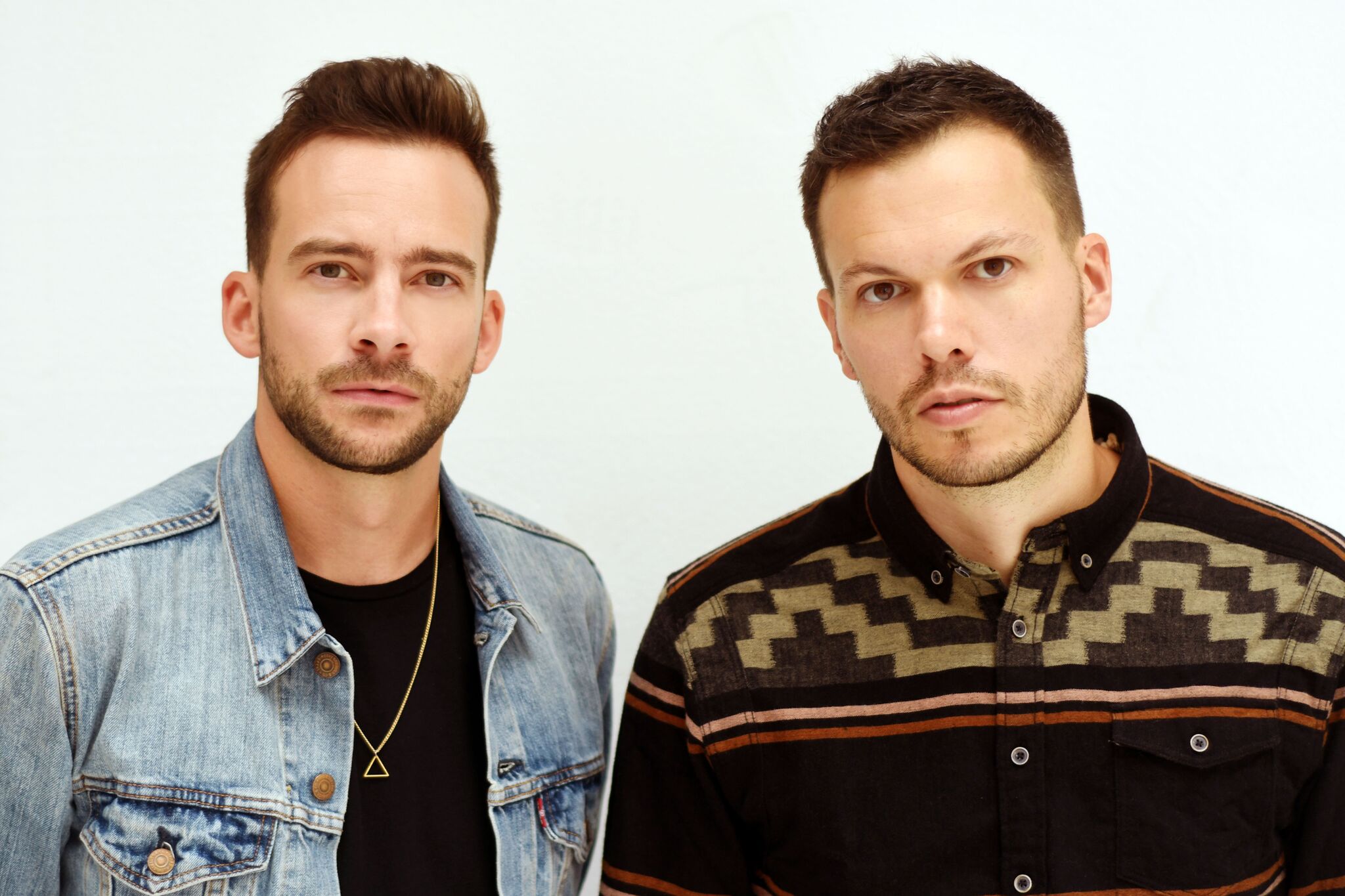 Originally from London, Delta Heavy is an artist duo that defies barriers in terms of their music. Their music production style is vastly diverse, ranging from gritty and dirty dubstep to euphoric future bass, and can be evidently heard from tracks within their new album Only In Dreams.

Delta Heavy is over the moon excited about their Only In Dreams album, and have even announced a tour revolving around the various styles and emotions that stir from the tracks within. The tour is taking place in cities across Europe and the United States – check to see if Delta Heavy is playing in your city because they are one powerhouse you simply can’t resist.

The album consists of 11 tracks, each possessing its own sense of unique production elements and creativity. In particular, setting the mood for the entire upcoming soundtrack is the “In Dreams” intro record. The onset of soft, atmospheric tones are fused together with deeper and darker instrumentals. Gradually, Delta Heavy built up “In Dreams” slow and steady into an absolutely haunting dimension. Ending on a cliff-hanger of a rhythm, listeners are immediately roped into the commanding music ahead.

The Nocturnal Times: What were some of the inspirations you had regarding the album name and some of the tracks you chose to include in it?

Delta Heavy: The name came after all the tracks were written. We actually separately came up with basically the same name for the album when we were deciding what it was to be called. Ben came up with ‘In Dreams’ and I came up with ‘Only in Dreams’, so the intro track is called ‘In Dreams’ and the album ‘Only In Dreams’. For a lot of our music and the sound we’ve developed, it feels like it’s slightly otherworldly. We have lots of atmospheric musical sections in tracks that are often linked to space travel, or taking you away from what feels like the ‘here and now’. Also, the topic of dreaming has regularly cropped up in songwriting and the visualisation of sounds, how we talk about our tracks, so it’s a very natural and obvious theme for how the second album should be conceptualised. From a listening point of view, it’s cool because everyone hears music in different ways and you can say, “it’s only in your dreams”, “only in your mind”. In a weird way ‘Only In Dreams’ is an all-encompassing title on how people can listen to our music.

The Nocturnal Times: How long did it take to fully complete the album from start to finish?

Delta Heavy: We only decided that we wanted to write an album at the beginning of last year and we hadn’t written any of the tracks for it. It was an incredibly quick and intense period where all we did was write music, knowing that we wanted it completed by the end of the year. ‘Paradise Lost’ took us three years to write, normally we write and when it’s done, it’s done. This time we took a whole new outlook on this album, we wanted to push ourselves and see what the pressure of completing it in 12 months could bring out.

The Nocturnal Times: What are some of your biggest career highlights or some of your fondest memories thus far?

Delta Heavy: The first time we did EDC Vegas was such an incredible experience, the biggest crowd that we had ever played to, it was such a surreal moment. A more recent achievement was when we did our own show for ‘Paradise Lost’. The show was a chance for us to have our own ticketed event, designed entirely by us with our own ideas, line up and concept, everything from top to bottom was our decision and that’s what you aim for when in this position – to try and make everything your brainchild. To be able to take that to Amsterdam and Perth, Australia – the fact we got it to the other side of the planet is something we are really happy about and would love to be able to build on that.

Additionally, growing up all I had ever wanted to do was write an album, so when the first album was created I was extremely satisfied as it takes an awful lot of work to put these things together, especially your first album. It has to be special.

The Nocturnal Times: What do you have lined up in the upcoming months that you’re most excited about?

Delta Heavy: We are going to be busy with the ‘Only In Dreams’ tour, some cool festivals over the summer that we are really looking forward to and we will be continuing in this groove of making music. There is a lot in the pipeline already, you’ll be hearing from us again pretty soon!

The Nocturnal Times: Tell us more about the Only In Dreams tour and a few cities that you’ll be stopping through?

Delta Heavy: The ‘Only In Dreams’ tour started a couple of months back, we are going to be busy for a while. We have lots of US dates already in the diary, the next one will be March 28th at  Deadbeats Goes Off The Deep End for Miami Music Week. We’ve shows coming up in Portland, Salt Lake City, San Francisco, Tulsa, Indianapolis, George and a couple of shows in Texas! More dates will be announced so keep on top of our socials to not miss out.

The Nocturnal Times: Who are some of your biggest inspirations both personally and professionally?

Delta Heavy: That’s a deep question! Professionally it was the kind of music we listened to when we were younger to that inspired us to become producers, going back as far as the Prodigy’s of this world, acts like Blur and Guns and Roses, and DJs like Sasha and Andy C. In terms of working on a professional level, seeing how people like Andy C operate when it comes to their work ethic, and how highly regarded they are in the scene, not just for doing good work but also being inspirational people, happy and friendly, how they treat people, that’s something I think is very important. So from that point of view, those sort of people have been examples of how to conduct yourself and have been inspirational to us. On a personal level, my family have been very supportive and that’s driven me forward to do what I’ve always wanted to do.

The Nocturnal Times: What were a couple of big challenges you faced when writing, producing, and collectivizing the album?

Delta Heavy: Time. Time was the biggest pressure because we gave ourselves a window to write and we were determined to keep that window. Making sure that we wrote all the music, and for it to be as good as we wanted it to be, in the time that we had allocated, was a pressure. But also sometimes, I think particularly for us, it’s really good to have that pressure because it forces you to make decisions, it forces you to commit to things and it really demands that you dive headfirst into what you’re doing. Different people work better in different ways and sometimes for us, procrastination can be a killer of music and moving forward. It was a very different way to writing from how we have in the past, with our first album and also generally all of our other music, but it was really cool to get to the end and look back at 2018 and realise that in less than a year, we’ve written a whole album.

The Nocturnal Times: If you had to pick anyone in the world to listen and see their reaction to your album, who would it be?

Delta Heavy: To listen and see the reaction? Probably my grandfather. That would be interesting, that would be some kind of torture perhaps, maybe, I don’t know! But it would be fascinating to see his reaction. I’ve never actually played our music to him. He’s 93, so even sort of grasping the concept of what I do to him, it blows his mind a little bit. I don’t think he fully understands even now.

The Nocturnal Times: How do you feel about other producers remixing tracks off the album and do any come to mind right away?

Delta Heavy: We are looking at pulling together a remix album for later in the year so we feel very good about it. Perhaps we shouldn’t reveal who we’re thinking, though, as it would spoil the surprise when we release it.

The Nocturnal Times: Are there any goals you accomplished with this album? And have you now set new goals for your music/projects as an artist? We’re excited and eager to know!

Delta Heavy: One goal we wanted to focus on when writing the album was doing collaborations. That’s something we haven’t done much of previous to this album, hence us working with Muzzy and Zeds Dead and all of the other amazing artists on the album. With that goal realised, it’s something we found we really enjoyed and so we want to carry it on this year a lot more with future projects; we found it really inspiring. Also, it helps us reach out to new fans even more.