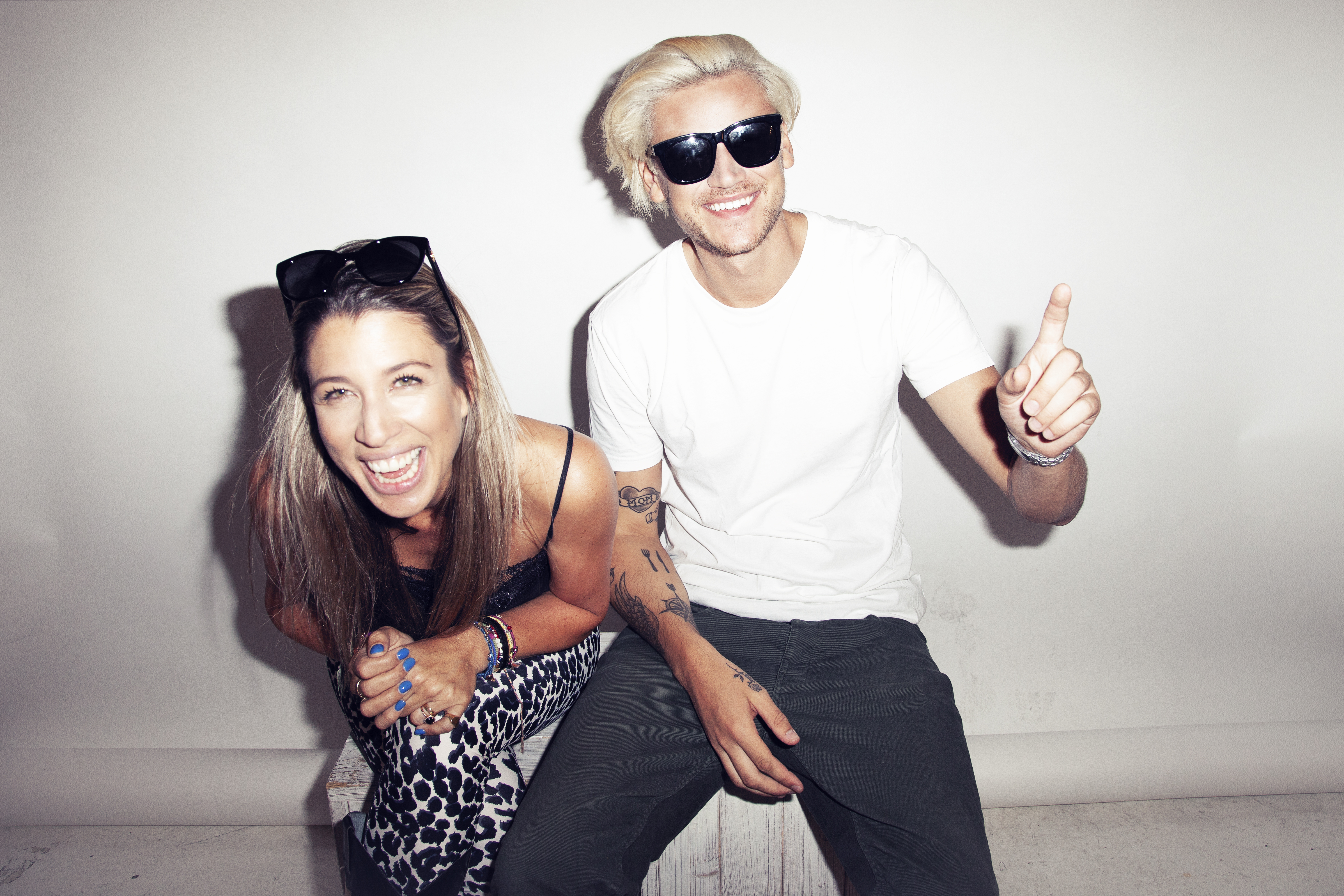 Hailing from The Netherlands, one of the biggest epicenters for all things electronic dance music, DJ/Producers Dante Klein and Cat Carpenters have teamed up with singer/songwriter Cimo Fränkel to lift up summer with their new single “The Way I Love You” out now via Spinnin’ Records.

By no coincidence at all, the brilliant trio dropped “The Way I Love You” yesterday on Friday, July 13th – a day typically known for bad luck. Precisely their point of saying screw you negativity, the all around feel good track conveys that each day is all about what you make of it. Choosing to show friends and family you love them, and spreading positivity like wildfire lays at this soundtrack’s very core. Turning all the vibes around yesterday, the new anthem is already racking up global attention and lifting up summer in a slice of pure bliss.

“As a friend group we went into the studio and there was such a positive and loving vibe. With this energy we created this track, the thought behind this is to spread more love and positivity in the world. Every day, all day is ‘The Way I Love You’ day. The music video will show that kind of day with loved ones.” – Cat Carpenters

From bursting onto the scene three years ago, Dante Klein has shown the industry he is here to stay and is capable of producing a full on expedition of sound and performance. Amassing over 325 million streams on Spotify, his collaboration with global stars Cheat Codes “Let Me Hold You (Turn Me On)” skyrocketed Klein into a dream world of music. With massive sets already under his belt at Tomorrowland in Belgium, Ushuaia in Ibiza, Sunrise Festival in Poland, and many more, his stage presence is commanding dancefloors worldwide. Following his first official tour in Asia in 2017, fans are experiencing the depth of Dante Klein and are stoked to witness all 2018 has to offer for this rising sensation.

Full of color, sun, and imagination, “The Way I Love You” from start to finish flows with one of the most lighthearted and soulful melodies of the summer. Lighting up this season with elegance, Dante Klein and Cat Carpenters have produced a masterpiece of fresh beats that can easily take over clubs as well as span scenes of thousands at major music festivals. Cimo Fränkel’s vocals without doubt take the song to a higher level, as he adds his signature serendipitous touch to beaming rhythms and perfecting it as the finely-tuned piece it has become.

Alongside the radiant track is the even more lively music video for “The Way I Love You,” featuring the artists themselves galavanting around Amsterdam for a day full of typical fun shenanigans. Embodying the vision of the song itself, Dante Klein, Cat Carpenters and Cimo Fränkel are nothing but smiles, laughs, love, and good vibes on their exploration through the wondrous city and its sensational sights. Right in line with the song’s positive message, the video includes the trending #TWILY, whereby the artists interact with fans and encourage us all to ‘Do Something For The One You Love.’

Teaming up with Cat Carpenters for “The Way I Love You” couldn’t have been a better choice, considering her aura of gleaming energy and kick ass repertoire of live performances, original and collaboration tracks. Notorious in her hometown, Amsterdam, Cat Carpenters has blossomed from this mecca city to the rest of the world dishing out heart soaring sets full of her creative performances. Mixing house music night after night with newly discovered tracks, fans can easily follow her around the world and experience fresh sets every time.

Completing the Dutch trifecta, Cimo Fränkel grew up with impromptu studio visits as well as ethos of funk culture thanks to his father who was a funk musician. Featured on records with dance icons Armin van Buuren, EDX, Wildstylez, and more, his multi talent of singing and songwriting are paving one heavenly musical path for Cimo Fränkel.

Check out what Dante Klein and Cat Carpenters had to say about “The Way I Love You,” favorite upcoming festivals, production insights, and all things inspiration in our interview below!

The Nocturnal Times: First, let’s talk about where you grew up and your background in music. How has being from The Netherlands (one of the mecca countries for cranking out mass amounts of talented producers) helped shape your dream to pursue dance music as a career?

Dante Klein: I grew up in a small village near The Hague in The Netherlands. When I was younger I loved playing the piano at my grandparents. After that I started with piano lessons at the age of 6, but that only lasted for 2 months because I got kind of scared of my teacher. When I was 16 I decided to go to a school especially for DJ’s and Producers: “The Herman Brood Academy.” I really think that’s what makes The Netherlands different than other countries regarding music. We have more freedom to be creative on a higher level.

Dante Klein: That would definitely be Dr Dre and Jimmy Iovine. After I saw the documentary “The Defiant Ones” I was hooked right away. How they handle everything in the music industry really inspired me.

The Nocturnal Times: Evolving as music artists is an inevitable and exciting thing. When you first started making music, did you have a vision for your sound development?

Dante Klein: I always tried to be creative with my sound. Of course it evolved over the time being. But yes I really had a certain vision about the Dante sound. And I couldn’t be more happy with my own sound right now:)

The Nocturnal Times: What can you share with us about the initial stages of creating a song? Do you have a typical way of beginning, or do you find yourself switching it up?

Dante Klein: Most of the time I start with a drop. I’ll begin with writing chords, then the melody. After that I’ll begin with the drums. From there the inspiration comes in!

The Nocturnal Times: You are always using elements in your music that involve people in a godly feel and it makes you very unique. Where do you get your inspirations?

Cat Carpenters: My friends and family, as well as the parties and festivals I got to.

The Nocturnal Times: How did you both come together with Cimo Fränkel for your new single “The Way I Love You?”

Dante Klein & Cat Carpenters: The three of us are already good friends for over 3 years now. And we never made music together. So we decided to hit the studio and the vibe was perfect right away. Within 2 weeks the track was finished!

Cat Carpenters: Cimo is one of the most talented singers I know and he is also a super nice person to work with.

The Nocturnal Times: “The Way I Love You” is full of positive energy and radiant melodies. Tell us about the inspiration behind the track? How does it feel to see the inspiration come to life?

Dante Klein: We wrote the chord progression and felt this loving vibe. So that’s when Cimo started writing. I think that was the moment we thought we needed to make a track about positivity and love!

Cat Carpenters: Every day has to be The Way I Love You Day!

The Nocturnal Times: After such an epic collaboration, who are a few artists you hope to team up with in the future?

Dante Klein: That must be 50 cent and Dr Dre. They are not familiar in the dance scene, I know. But still they are one of my biggest inspirations.

The Nocturnal Times: Are there any shows/festivals this summer season you are looking forward to most?

Dante Klein: I’ll be playing at Mysteryland Main Stage this year. Mysteryland is one of the biggest dutch festivals and it’s a big honor to be playing there!

Cat Carpenters: I’m going to a lot of festivals this summer, spending a lot of time in the studio and being with my friends and family.

The Nocturnal Times: What can fans expect with new music for the remainder of 2018?

Dante Klein: Get ready for a bunch of new Dante Klein music in the coming months!