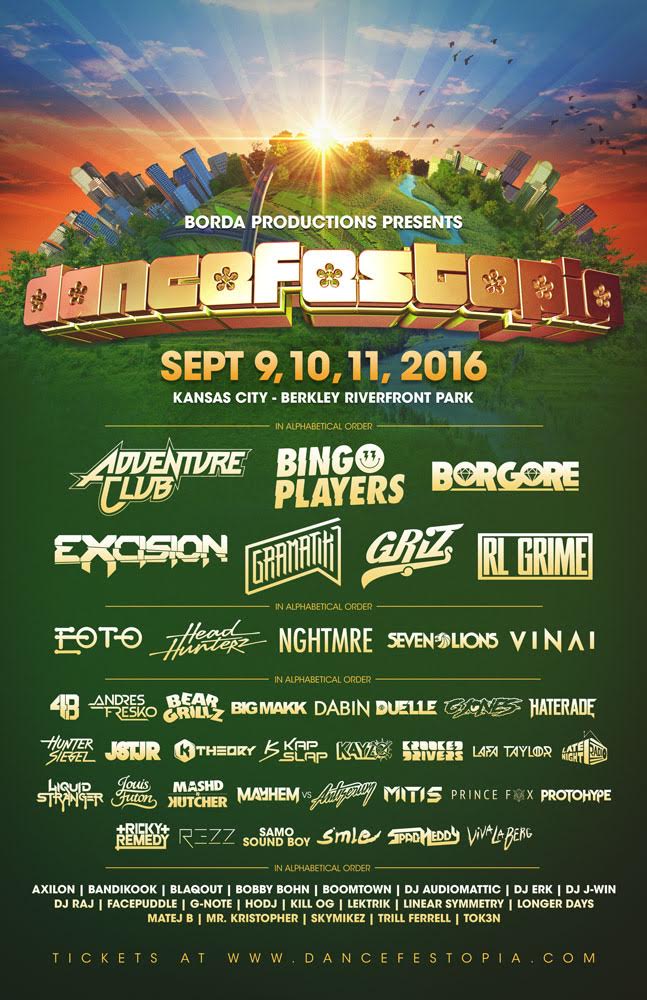 The highly anticipated lineup for Dancefestopia 2016 has been released and it’s bigger, better, and filthier than ever.

Dancefestopia is making its way back to Berkley Riverfront Park in downtown Kansas City for its fifth consecutive year this September 9th-11th. Dancefestopia is a 3-day ,3-night, and optional 4th night, camping festival set amongst a unique backdrop and offering a wide array of electronic dance music (EDM) artists, vendors, art installations, workshops, and more.

Despite being a camping festival, attendees are only a few blocks from bustling downtown Kansas City. Berkley Riverfront Park itself, however, is spacious, slightly wooded, and located right next to the Missouri River. This combination of both industrial and natural landscapes provides attendees with the best of both worlds. Those who prefer camping festivals in the middle of a forest won’t be disappointed by the spacious campgrounds (complete with showers and flushable toilets) and gorgeous riverside sunsets, and those who would rather opt for a hotel have plenty of options within walking distance, as well as convenient on-site parking.

For 2016, Dancefestopia is boasting 3 stages; a brand new massive main stage with enhanced production, the “JunkYard” stage located inside a large tent and complete with intense laser light shows, and a small 3rd stage where emerging artists will play that will keep night owls dancing  until sunrise. Another unique characteristic of this festival is that almost all of the headlining acts run on the main stage, therefore, attendees could technically see all 35 headliners perform, instead of having to pick and choose as with most festivals.

After leaving the Midwest in awe in 2015 with headliners such as Bassnectar, Porter Robinson, and Datsik, the bar was set extremely high for this  up-and-coming festival. Bassheads and trap lovers are in for a real treat with this 2016 lineup featuring Adventure Club, Bingo Players, Borgore, Excision, RL Grime, Gramatik, NGHTMRE, Seven Lions, and plenty more. Funk fans are also in for a pleasant surprise with artists such as GRiZ and Eoto.

For more information about tickets and VIP upgrades, as well as general festival information and guidelines, visit  Dancefestopia.com.