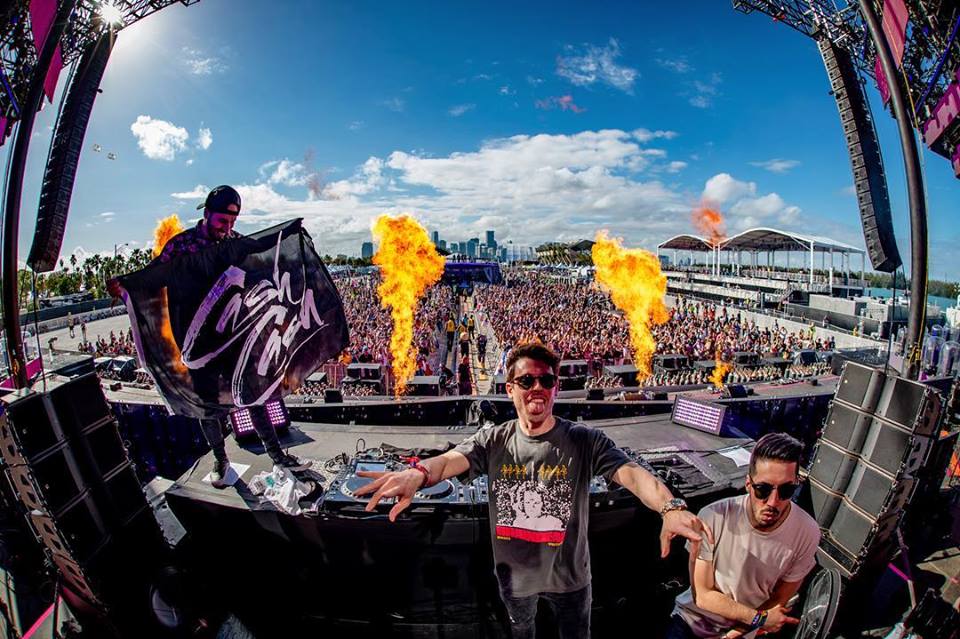 DJ/Production trio Cash Cash has undoubtedly become one of electronic music’s true jewels, whose charming charisma and adventurous style strike through not only the monumental music they’ve been releasing for over 10 years, but roars through their thrilling live performances around the world that fans simply can’t get enough of.

Cash Cash sits strong atop the pyramid when it comes to continuously expanding their horizons on freshly minted sounds, fierce collaborations, and surprising fans time after time with anthem records that will last a lifetime. Electronic crowds know Cash Cash from back in the day when they used to throw down alternative flairs to their music, and progressively produced staple dance tracks like “Take Me Home,” “Lightning,” and “Surrender” (just to name a few).

Taking on Ultra Miami Day 2, the guys hopped up on stage ready to rage with another one of their classic adrenalizing sets. In the first opening songs one of the mixers blew out, and it’s safe to say these guys handled it in the most badass way possible. Chucking the mixer down at the ground, the crowd loved it and from that moment on it was nonstop energy at Mainstage. There is certainly something special about Cash Cash’s natural ability to rock out a stage, and to lock in a sensational presence among fans. Saturday’s Ultra set had everything from heartfelt tunes that fans sang their lungs out to including “How To Love,” and “All My Love,” to hard-hitting drops through and through, to throwback jams like Nelly’s “Ride Wit Me,” and a whole lot more of both original and collaboration bangers.

Cash Cash left Ultra Miami eager for more, and we hope to see them out at Ultra 2020 next year. Until then, we had a great time chatting with these guys so read on to see everything they’re up to for 2019 including new music and tour announcements!

The Nocturnal Times: Here we are again at Miami Music Week & Ultra Music Festival! When was the last time you were at Ultra? What have you been up to since?

Cash Cash: It feels good to be back, the weather’s nice and it all starts with good weather! We were back here in 2015 playing the Worldwide stage. Since then it’s been busy. We’ve been touring the world non-stop and putting out lots of new music. We’ve got residencies in Vegas and Atlantic City that really keep us busy and it’s just fun.

The Nocturnal Times: We saw your set out there at Mainstage. You had the little hiccup with the mixers – it happens. How do you react when unexpected things like this happen?

Cash Cash: Yeahhh! You have to have some fun with it. When the gear malfunctions it’s like what do you do? The crowd’s just standing there and they want something too. Your adrenaline is going and you want to play and it’s like this mixer is burnt out…it smells like burnt plastic so I was like fuck this it’s already broken! That’s what you do with a broken piece of gear, just finish it. It’s all in good fun. It’s a great festival and we’re happy to be here. It can happen anywhere.

The Nocturnal Times: What do you all think about the new location for Ultra here at Virginia Key?

Cash Cash: It’s cool and it’s different. The water’s awesome and there’s some really great views on the boat. Today was great and the crowd was feeling it. I think we’re getting into a new era.

The Nocturnal Times: Tell us about the new music you have going on?

Cash Cash: We’re really excited about our song “Call You” right now. It just hit #1 on Dance Radio so that’s always exciting for us. The Nocturnal Times: How did you get together with Nasri for the track? Cash Cash: I think it started as a random writing session. He’s a writer mostly and we wrote this song together and he was like let’s get someone else to sing it. We had all these people play it and they didn’t sing it as good as he did. He sang with the most conviction so eventually we were like let’s just put it out with you on it and move forward. He’s great!

The Nocturnal Times: Are there other collaboration tracks in the works this year? Which are you most psyched about?

Cash Cash: Yeah totally. We have a song coming out with P!nk on April 26th which we’re really excited about. We’ve been working on this song with her for a while now and we didn’t know when it was going to see the light of day. It’s great to finally set a birth date for it.

The Nocturnal Times: You have a lot of upcoming festivals and shows for 2019 – tell us more about them?

Cash Cash: So many…we have EDC Las Vegas, we’re really pumped for that. We’re heading back to Asia this summer and doing some festivals out there. That’ll be awesome, we’re always on the move. The Nocturnal Times: are there any first time festivals this summer? Cash Cash: Vegas! That’ll be our first time playing EDC Vegas. The Nocturnal Times: Our first festival was actually EDC New York when you guys played during a flash flood! Cash Cash: Ohhh yeah! They brought everyone inside the stadium. I remember we played for like 15 minutes. Shit happens it was fun though.

The Nocturnal Times: You guys have roots in the alternative & pop-punk scene. What made you come over to the electronic direction?

Cash Cash: Well we started out as an electro-pop kind of band and we were always super heavy on the synths, electronic drums, and electronic production. We were always remixing for other artists early on, and it was kind of just a slow evolution. As we were remixing other artists and kind of losing band members (haha) it just made sense. If you really look at our whole evolution and how we got here, there’s a whole timeline of it and it was just a slow progression. We were always mixing and mastering our original music and that made it really easy. So evolution and here we are. We’ve been doing this for over 10 years now.

The Nocturnal Times: Do you think you’ll stay going in this direction for the near future?

Cash Cash: Yeah I mean we might change it up, we change it up all the time. We work with rappers, we work with hip-hop artists and rock artists. It’s the features too that also help us do things outside of our box – they push us to new limits.

The Nocturnal Times: We want to ask you guys about Tritonal and your collaborations. When you all team up the songs are amazing. Have you been talking about doing another track together?

Cash Cash: We’ll do another one we’ve been talking about it. Chad (of Tritonal) always hits me up like dude The Untouchable Tour! Let’s do it again – we’ll go bigger this time, we’ll get a bigger stage and bigger songs. So we’ll see you never know, we could bring it back.

The Nocturnal Times: What other things are you most looking forward to for the rest of 2019?

Cash Cash: I’m getting a dog (Jean Paul), I’m excited to go back to Asia (Sam). We had an amazing time last year and we played some massive festivals last year. We really had an overwhelming response and everything so I’m just pumped to get back there.