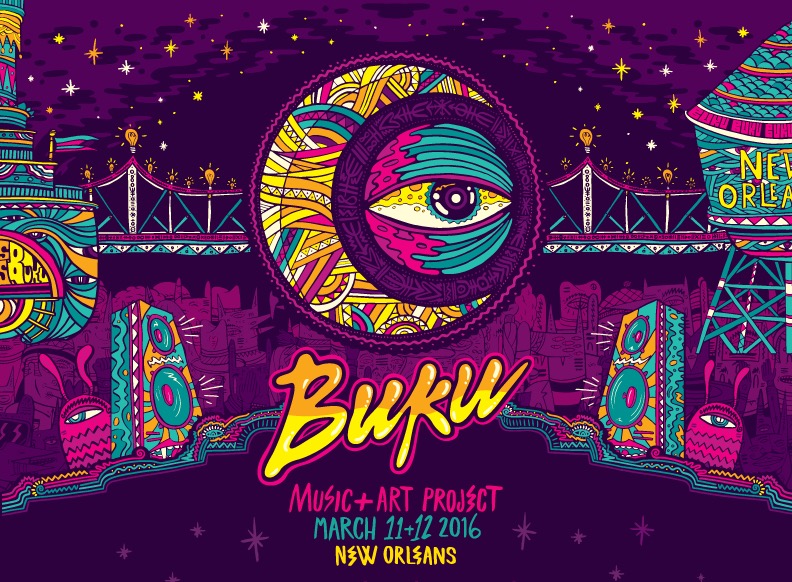 Buku Music and Art Project is making its return—for the fourth consecutive year—to Mardi Gras World on March 11 & 12, 2016. This two-day festival is a cool, eclectic tribute to New Orleans, and to today’s most progressive music genres and artists.

This year, artists include the massive diversity of Above & Beyond, Pretty Lights, Kid Cudi, Fetty Wap, A$AP Ferg, CHVRCHES, and many more. Buku also offers VIP tickets that allow guests onboard the S.S. Buku, a 3-level New Orleans-style riverboat docked on the Mississippi River next to the festival grounds. The boat includes VIP amenities, which include: an open bar, climate controlled bathrooms and lounge, and a VIP-only set on the boat’s stage from artists Autograf, Louis the Child, D.R.A.M, Prince Fox, and The Funk Hunters.

Buku is known to do an impeccable job of incorporating art into all aspects of the event. Buku claims that it is not an art gallery, but rather an art project; it’s landscape in a constant state of change. Be it the kinetic art happening all around you by hundreds of non-traditional performers to revolutionary visualizers throughout live performances by world class musicians or bidding on your favorite art pieces you watched be created live for charity, it’s impossible not to submerge yourself into the ever changing artistic vibe of the world of Buku.

The stages and spaces within Buku all exude a party vibe that’s simultaneously industrial, artsy, and sassy; exactly what a tribute to New Orleans should be all about. Buku boasts five unique stages open to all festival-goers, and one VIP-only stage onboard the S.S. Buku. Each stage brings its own individuality and contributes something to the festival’s ambiance.

From the Power Plant, ballroom, and Float Den stages featuring in-your-face production, brand new lighting, and spectacular art decor to the sexy riverside underground dance party atmosphere of the Back Alley to the one of a kind Bukulture tent, which thrives upon and celebrates the extravagant and progressive culture of street performers, it becomes very clear that Buku creates all its indoor and outdoor spaces with specific intention.

Be sure to come start out your festival season early with this one-of-a-kind music and art project. From the incredible diversity of musical talent to the dramatic and ever-changing artistic landscape and the original New Orleans inspired fashion and cuisine, it is certain that you will find plenty of celebration and inspiration at Buku 2016.

Tickets are on sale now and going fast. Be sure to pick yours up at ‪http://thebukuproject.com/tickets/.