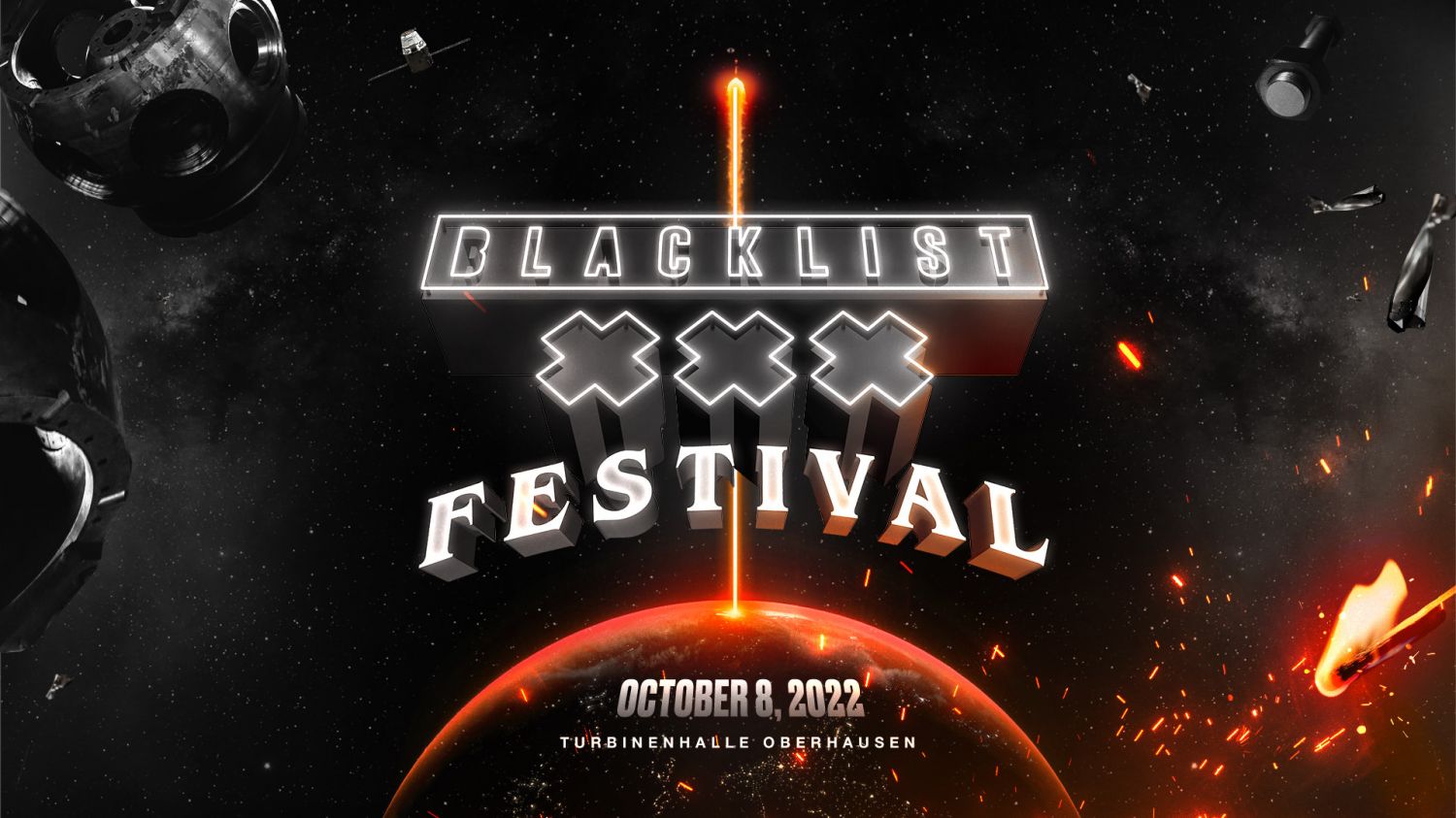 Last Saturday, October the 8th, Germany saw the return of one of the most popular and biggest trap/bass house festivals. With some veteran organizers behind this event, one could be sure that they invite some of the most requested acts of the moment. These alt weeks they had been announcing names left and right from Svdden Death, Marauda, Riot Shift, Lil Texas, the birthday boy Kayzo, Bootshaus Resident Elle Rich, Moksi, Lari Luke, Holy Goof, GRAVEDGR and many more. With the Turbinnenhalle (Oberhausen, Germany) being a huge location it was no surprise that these artist got spread over 4 rooms. The make it even better for attending bass heads, they could party from 7.00 in the evening till 7.30 the next morning.

With an insane line up like this it is hard to just stay in one room since all of them had an great act playing at the certain time. Bass heads could join the birthday boy Kayzo at his birthday celebration in the main room, Moksi tearing down the place or the crazy cowboy Lil Texas getting himself undressed in front of the stage (again). Or witnessing the last gig from Crowsnest label boss Code Pandorum, from now on he will be playing under the alias Inhuman Society. Or the man of the hour the scary, big, bad, shovel wielding maniac GRAVEDGR. The amount of people he brought on stage was insane. Something we will be talking about with him.

Overall those attending Blacklist festival where giving the royal bass treatment. Many headbangers will have surely suffered from a whiplash that night.

Thank you GRAVEDGR for you time and sitting down with us. This summer you played some massive shows across Europe from Rampage over to PAROOKAVILLE. Now you just finished your show at Blacklist Festival. You played so many memorable events, at PAROOKAVILLE 2019 you and Carnage on the huge stage. This year you shared the mainstage with Yellowclaw and played your set at the Wacky Shack bunker. Now at the Blacklist Festival you brought so many of your friends along, Hood Squad, BLVCK CROWZ, Badfella and Riot Shift.

Noctural Times: How is it for you sharing the stage with someone else?

GRAVEDGR: Of course! its my pleasure to be finally getting to do this interview. This year has been a blessing honestly. I can’t believe this is my third time coming back to Europe this year. Being able to share the stage with fellow piers and friends is always the best. I like to compare it to, as a child being able to sleep over at a friends house. What better feeling than being able to enjoy something that you love doing than with a friend you know? Forever grateful for the artists who came out for my set at Black List Festival, also being able to share the stage, in the past and present, with absolute legends in EDM.

Nocturnal Times: Do you have any memorable moments of these gigs? And which one was the most exciting for you?

GRAVEDGR: I honestly think being able to share the stage with Carnage, now Gordo, at PAROOKAVILLE 2019 was the biggest moment in my career so far. Also super meaningful because he was one of my biggest inspirations to make music. If i had to choose in recent times tho, definitely my b2b with Hekler at Rampage Open Air this past July. Not only was it one of my favorite sets, but I got to play that set with one of my closest friends, Hekler. This past year we started a podcast called, “HardHeadz” together with our other good friend, Lit Lords. That brought all three of us even closer than what we already were. Being able to play my first Rampage Open Air with one of my best friends DEFINITELY takes the cake.

Nocturnal Times: Your finished a very intense gig. To be honest it was so hot, the sweat was dripping from the ceiling. How do you cope with such heat underneath your outfit?

GRAVEDGR: Honest being in hot environments comes naturally to me. Growing up I always helped my dad with his work, hard labor. Every weekend we would be in the scorching sun working on his job sites, mowing lawns, fixing irrigation systems and what not. Fast forward to the present, Its kind of similar conditions in my suit. I guess you could say I’m used to it.

Nocturnal Times: So back to the outfit. Why the name “GRAVEDGR” and the outfit? Will you ever show your face or will you always be the anonymous person? And will you ever again bring our shovel along?

GRAVEDGR: When I would help my dad with his jobs, one of them just so happened to be at a local cemetery where we used to live. We would not only maintain the cemetery clean, but we would also bury the people there. Once I grew old enough and grew a passion for music, the sound I created music wise correlated very well with working at a cemetery. I don’t think I need to explain how dark and aggressive my music is haha. The rest came naturally to me. I wanted to create an anonymous killer persona that was super intimidating. I personally think that I have the hardest outfit in the scene, besides void. When it comes to my shovel, I always advance it for my shows, but either the venue is too small to bring out a full size shovel atm, or they always bring the small shovels to plant flowers with haha. I am NOT going to walk on stage with a small ass shovel lol

Nocturnal Times: Carnage seems to be huge influence/supporter for you. How did you end being in his inner circle? Now that his dropped the Carnage moniker what are the chances of you reuniting with him on stage again?

GRAVEDGR: As i said before, Carnage was a huge influence on my musical endeavors growing up. I always took inspiration on his, “do what you want” mentality you know? He never cared what people thought of him, and that definitely stuck a chord within me. I started creating music that carried the sound he had back in the days. I guess I manifested my music to reach him one way or another. The first time he played one of my records was back in 2015 @ Electric Love music festival in Austria. That was such an inspiring movement for me. Gave me the fuel I needed to keep on going. After his consistent support with my music, fast forward to my 21st birthday. I finally got the chance to meet him and sit down and talk with him. The rest is basically history. The next year i signed to his label and released my hit record, “Rampage.” As for sharing the stage with him once again, now that he is making house music, I am not sure. I’m honestly just glad he gave me the opportunity to release my music on his record label to show the world.

Nocturnal Times: Two years ago you dropped your debut album “6 Feet Under” via Heavyweight Records. What is your fav. track of the album? Any plans on a new album yet? Or are you just enjoy touring at the moment?

GRAVEDGR: That is a hard question to answer… I don’t want to sound cliche and say every song on that album is my favorite, but they really are. The “6 Feet Under” was a project that was 4 years in the making. It is my baby so it mean the world to me. If I had to choose tho, it would have to be Kamikaze. As of right now I am working on my second album, and I don’t want to spoil too much, but it is some of my BEST work yet!

Nocturnal Times: Who do you think had a great influence on the Dubstep & Hardstyle push over these last years? And where do you see the future will bring this genre?

GRAVEDGR: Well i think what influences my hybrid Hardstyle/Trap/Dubstep music is where my origins of dance music came from. The first track that made me fall in love with this genre was “FTS” by Showtek, legendary track. It really spoke to me. Shortly after that I found Skrillex, and all of his music. I have always had a passion for multiple genres, so when it came to me starting to create music. I really wanted my work to imbody my personal preferences. As for the future of this genre, I would love to see other bigger artists support it and play it at mainstages all around the world. The reality of the genre is that there are not enough artists really putting it on. There is still a lot of, “genre segregation” as i like to call it, going around. I try my best to not let it bother me, so I just keep trying my best to grow this genre as best as I possibly can.

Nocturnal Times: What can we expect in the future from GRAVEDGR? Any new tours? New music? Other announcements you want to share with us?

GRAVEDGR: Expect the best version of GRAVEDGR in the years to come! I have so much new music to share this coming year. I can’t wait to share all of this with you all.

Nocturnal Times: Any message for all your fans out there?

GRAVEDGR: I never thought at the beginning of 2022 that I would have gotten as many shows as I did. It really opened my eyes to a lot of things, weather it was perspectives on other genres around the world or real life matters. All I can really say is I’m forever grateful for the people I have meet around the world, that I can now call friends. As to all my fans who came out and supported me at a show, festival, or streamed my music, I love you all. I would not be in the position I am if it weren’t for you guys <3 For my Amsterdam crowd I will be hosting an event in together with Blacklist at October 22. The line up is crazy. Looking forward to see you there.

Nocturnal Times: Thank you for taking your time for our questions. We can not wait to see you destroying some clubs at the Amsterdam Dance Event

Tickets for GRAVEYARD at ADE can be found here.