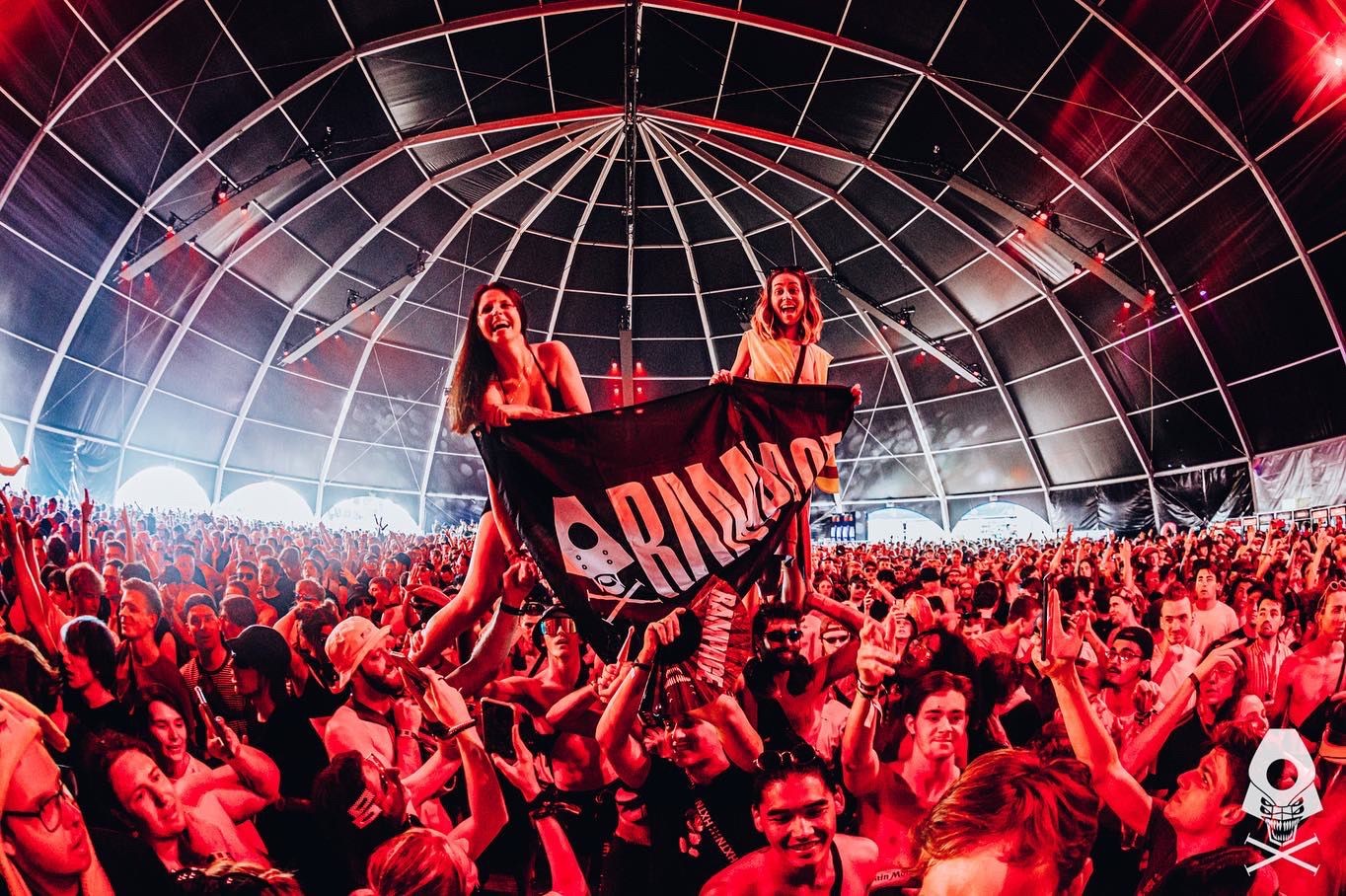 It is a beautiful Saturday when we are heading out to visit the remarkable Rampage festival in Belgium (Kristalpark, Lommel). After a first, very successful edition in 2019, everyone was looking anxious towards a spectacular second edition. Now, the weekend has arrived and everyone knows why they are here. For many bass music heads this is their holy ground where they meet up with their friends, listen to their artists and make new friends or discover new music. With about 35,000 bass heads attending this festival there should be no shortage of magical moments being made.

According to their website they are The Biggest Drum&Bass And Dubstep Party In The Universe. Rampage pride themselves on creating something new and exciting each and every year. For us it is the first time visiting Rampage. We had heard the stories and seen the footage but nothing of that could have prepared us for the exciting day we spent at this beautiful festival.

Being one of the biggest players in the industry, their line-up and festival ground did not disappoint. They invited about 150 acts from all corners of the world, including the likes of Camo&Krooked, Koven, Modestep, Gravedgr b2b Hekler, Spag Heddy, Virtual Riot, Luude and many more. This line up looks like the who is who of bass music. Add to that stage hosting by Star Warz and Invaderz, as well as acts representing every possible flavor of drum&bass, this is truly the festival to be at. But besides spoiling us with music the organizers went all out and also spoiled our eyes. Fantastic build stages, carnival attractions and even a skate competition. Those that wanted to relax had enough hammocks scattered around the field to do so or take a refreshing dive in the pool. There was even a helicopter transformed into a cocktail bar for those that where looking for some more interesting drinks. For the brave ones there is even the possibility to get a tattoo or getting your festival “make-up” done.

It’s a fantastic festival to be at if you are in to Drum&Bass and Dubstep. During our day we got to see many remarkable artists, enjoyed good food and drinks and talked to several people during our time there. One of them being the Nicklas B from Germany. He had to say the following about Rampage.

“Rampage Open Air is a very special festival for me. So many people from different nations come together to celebrate the same style of music. For me that is just incredible and shows how big this family is” – Nicklas B.

For us we stayed only one day but regret not staying the whole weekend. One can only imagine the amount of love that the organizers put into their brand. The amount of work that goes on backstage to deliver a solid festival for the visitors. It is amazing to see both sides of a festival. The spectacular visuals during the various performances where amazing to see. You could tell that the crowd was really enjoying those the same way we did. If this is your music, this is definitely the festival you should visit at least once in your life.

But besides enjoying all the eye and ear candy we also had a meeting planned with the outstanding DJ/Producer Hekler. He invited us to spent a couple of hours hanging with him and his crew. From having drinks in the backstage with him to walking over the festival and seeing fans asking for pictures with him to enjoying his B2B with Gravedgr. We can really say that he is a truly humble artist that is grateful for everything good that is happening to him. So we are really excited to have sit down with him to ask him some questions.

Touted by many as the future of bass music, Vegas-born Shaun Bacus aka Hekler has carved out a place of his own with his unique take on trap / dubstep. With an emphasis on eery / aggressive sound design, he has a real knack for pushing musical boundaries. We are happy to talk to this amazing artist about his gig, future and his newest release “OG BOI BE BACK.”

Nocturnal Times: You just finished playing an amazing B2B set with Gravedgr. How stoked are you to be playing at Rampage? And how is it going B2B with Gravedgr? I mean it seemed you both are a pretty well oiled machine up there. And how do you prepare for such events?

Hekler: Honestly it feels like a dream to be here right now. It’s been years since I’ve been able to perform outside the United States. Going b2b with GRAVEDGR is one of the best experiences I’ve had playing a set. Our vibes just seem to interlock perfectly. When we prepared we just listen to a bunch of our music and while one of us is playing a tune the other would choose a song at random for the next and hope it sounded good.

Nocturnal Times: So after 2 years of lockdowns, festivals getting cancelled etc., how do you look back on that period? And what is the most important thing you learned for yourself? And what did you do during that period to keep “sane”?

Hekler: Thinking back doesn’t even feel like real life. Literally all of our lives were put on hold, I’m just very glad we’re all getting back to what we do. I learned alot about myself and I realized I had to go back to the basics with my music to grow as a producer during that time. As for things I did to stay sane, I focused on the melodic side of things and took more of an interest in analog synthesis and playing keys. I also got to spend a lot more time with my girlfriend and family so that made staying home a lot easier for me.

Nocturnal Times: So this weekend you played Rampage (Europe) what would you say is the biggest difference between the American crowd and European crowd? And what do you see as the perfect party crowd in general? In other words what gives you this extra buzz from a crowd during your gig?

Hekler: Honestly that’s a hard one to answer because there’s so many different people with different music taste that end up at every set so the energy can be different depending on where you’re playing. But all I know For sure is that both places always bring insane energy.

Nocturnal Times: Who or what inspires you the most? And who has been a great influence on your musical career? And is there any artist you really would like to collab with in the future?

Hekler: I love listening to weird experimental synth music , things that really get me think about textures in intros , or artists like Lorn , Flume , Mike Dean, Lisa Bella Donna, my list could go on forever. I love focusing on the small textures in other peoples music and certain things people normally wouldn’t notice. stuff like this has really inspired a lot of my newer work. As for collabs 100% would work with any of the artists I talked about earlier.

Nocturnal Times: You have an incredible stage presence. Taking the mic, dancing, climbing on the turntables, etc. It is really energetic to watch you see performing. Is that something that comes natural to you or something you had to work?

Hekler: Honestly the moment I get on stage I feel like I become someone else and just give the best experience I can. It’s almost like everything around me, every thought , or problem just disappears and the passion and love for this takes over.

Nocturnal Times: What is the story behind your newest release “OG BOI BE BACK”? What is the message you want to spread with that song?

Hekler: Honestly I wrote that song a little over 3 years ago in a hotel room before a show. Played it that one time and never thought it would of ever came out. It’s weird the way things work sometimes.

Nocturnal Times: How did you come up with the name “Hekler”? Does it hold any special meaning for you?

Hekler: As cliche as it sounds I saw it in a dream and wrote it on my old studios wall and sat on the name for a while before taking it on.

Nocturnal Times: During your career you probably had many highs and lows. Do you want to share a moment that has had a huge impact on you as person?

Hekler: So one of the best moments of my career that had a huge impact on me would have to be when I closed out cosmic meadow at edc Las Vegas 2019, I grew up not too far from where the festival is and being able to close one of the most beautiful stages in the world with my girlfriend and family standing with me on stage in our hometown has to be the number one moment so far.

Nocturnal Times: Thanks again for sitting down with us. Anything else you want to share with your fans?

Hekler: Of course thank you for having me! I just want to thank everyone who’s taken time to stream my music and come to my shows. I have tons of new music coming out almost every month moving forward. Peace and love!

Thank you for taking your time and hope to see you live on stage again.

Related Topics:HeklerinterviewRampage Open Air
Up Next