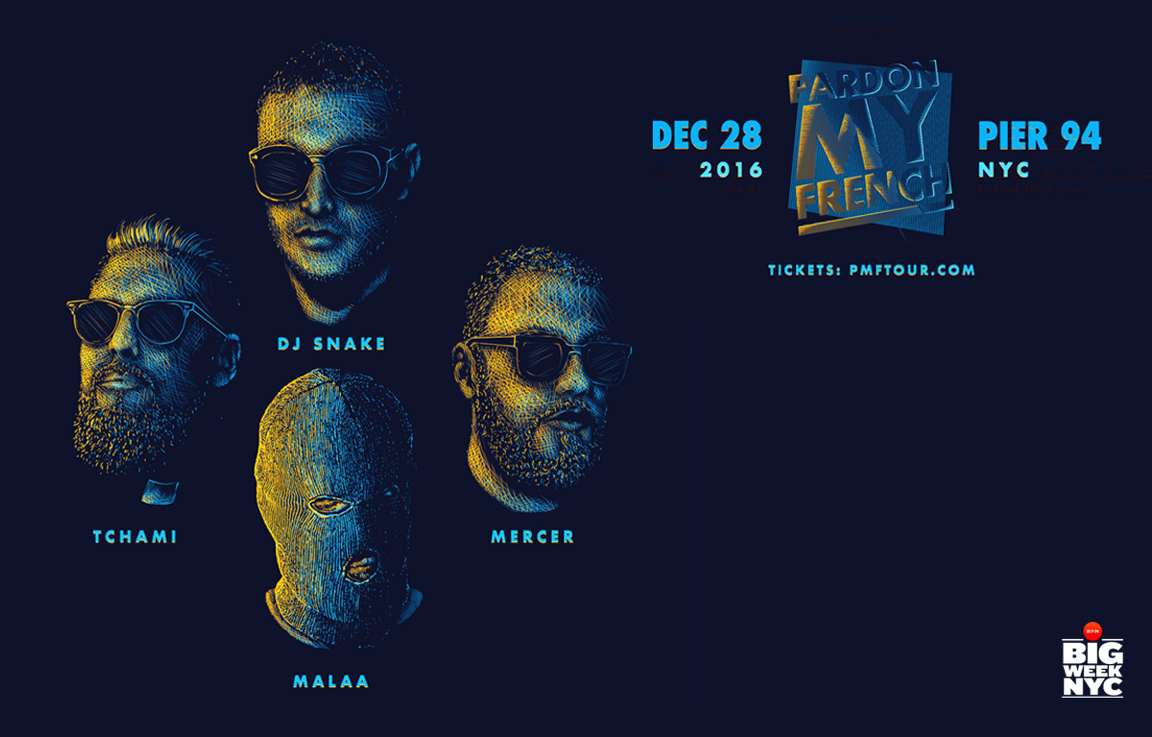 RPM has announced that the Pardon My French Tour will be making its way to Pier 94 on December 28 for Big Week NYC
DJ Snake has teamed up yet again with fellow French DJs Tchami, Mercer, and the mysterious Malaa for the Pardon My French Tour. The Parisian trio Mercer/Snake/Tchami has toured previously under the “Pardon My French” banner, but this year they brought the newcomer, Malaa, with them hitting six cities across the United States in April which proved to be a massive success due to the speculation of Malaa’s identity and the undeniable star power of the group, which appeals to a huge variety of dance music fans from trap to future house. Watch the tour recap video here:

The Grammy Award-nominated producer and artist, DJ Snake, exploded onto the international scene with singles “Bird Machine” and “Turn Down For What” in 2013. He has also worked in collaboration with Diplo on “Lean On,” which won Billboard’s “Best Dance/Electronic Song” in 2016. Tchami most commonly produces future house music, and came into widespread recognition after releasing a remix of “Go Deep” by Janet Jackson. Tchami has done several supporting tours with successful artists including Skrillex, Diplo, and DJ Snake. Mercer has the same manager as DJ Snake and Tchami, has collaborated with both, and has been taking big room festival stages by storm with his gritty, hard-hitting electro jams since 2013. Malaa is the mystery man of the quad that has been causing identity speculation since appearing on the scene in July of this year. Many believe Malaa could be a collaborative project between DJ Snake and Tchami, and possible even Mercer, but it is possible that Malaa is a new person all together.

Tickets for the Pardon My French Tour at Pier 94 NYC are on sale now at http://pmftour.com/.