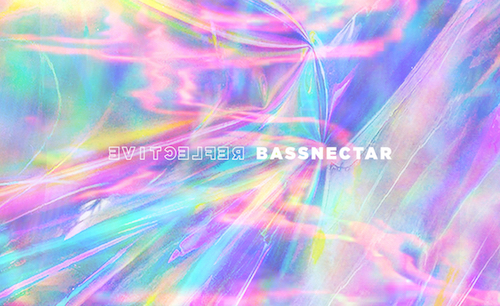 Bassnectar, the king of bass himself, just released six new tracks for stream or download in his latest album ‘Reflective’ via Amorphous Music.

Bassnectar has been considered a bass music pioneer for a long time. His reputation has reached a mythical level among bass heads, who follow his music religiously. It is no surprise then that any new music of his instantly causes a major stir in the electronic music community — I myself get giddy as a schoolgirl whenever Lorin blesses us with new music. So without further ado let’s take a look at ‘Reflective.’

The aptly named “Arps of Revolución” provides a very calm intro to this new album, featuring airy pads, crisp drums, and percussive arpeggiator lines. The structure is loose and could be considered much more of a soundscape than a complete song. Not to take away from the value of this track, it does a good job of putting one in the proper mindset to listen through the rest of the album. This could find its way into live sets as an interlude between two heavier songs, much like the second track in the album.

Gnar Gnar joins Bassnectar to pump up the energy with “I’m Up,” featuring Born I Music. This one goes back to a classic Bassnectar vibe, hitting hard from the get go with grungy bass synths, chopped up vocals, and fat dubstep drums. The track is heavy from beginning to end and is certainly going to be a staple in live sets.

“Was Will Be” featuring Mimi Page on vocals takes a small step back from “I’m Up.” Page’s long, legato vocal lines soar through this track, interleaved with melodic synth lines that drop in and out of a jam packed arrangement. A perfect example of a ‘wall of sound,’ Bassnectar fills this song to the brim with various synths and ear candy that perfectly balance each other without overpowering the vocals.

If you’ve heard bassnectar in recent years, you know that he’s not afraid to dabble in hip-hop. “Infrared” featuring Macntaj is a monstrous heavy trap track that will certainly make its way into festival sets.

Following “Infrared,” Bassnectar brings in G Jones to collaborate on “Underground,” a genre-bending song that has been featured in both artists’ live shows recently. There’s a certain darkness to the track. An eclectic combination of sounds give the track a very fresh and unique feel. Make no mistake though, “Underground” is a headbanger anthem and will start a riot in any crowd of bass heads.

‘Reflective’ closes with a collaboration between Bassnectar and Dorfex Bos called “Horizons.” A laid-back tempo is a step back from “Underground” but features some insanely grungy bass lines and simple yet fat drum sounds. Again, I could easily see this track used in a live set to link together higher energy songs. A smooth arpeggiated synth stands as somewhat of a melody, leading this reverb-heavy arrangement into an eventual fade and the close of ‘Reflective.’

I was surprised by this album, as each track really has its place and satisfies all my bass head needs. Bassnectar does a great job of creating some awesome standalone tracks while also setting up an album that can be listened straight through. I expected to hear maybe one or two songs that I would really enjoy, but this album is an authentic Bassnectar experience from start to finish. Thanks be to the lord of bass who has once again blessed us with his music.

Slushii “LUV U NEED U” [Monstercat]