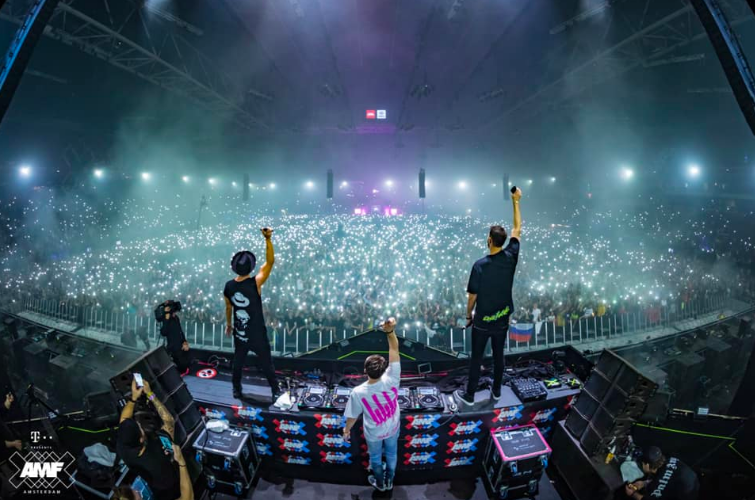 Combining all of the signature sounds of W&W, Timmy Trumpet, and Will Sparks is one recipe for a mainstage anthem of tremendous proportions. With their new release “Tricky Tricky,” they remake the all-time classic by Sequenza into a modern club hit. Out now via Armada Music, the release is sure to top the charts in the next few months.

The Dutch duo W&W was formed in 2007 by Willem van Hanegem and Ward van der Harst. Since then, they have made their mark in the music industry and created an original blend of trance and progressive house music. Reaching #14 on DJ Mag’s Top 100s list, the two have performed at leading festivals across the globe such as Tomorrowland and EDC.

As another Top 100 veteran, Timmy Trumpet has proven himself to be one of the most prolific performers in the industry today. As a multi-platinum selling recording artist, Timmy has dominated the charts across the map and won ‘Young Musician of the Year’ at the age of thirteen. With an impressive international touring schedule on top of that, the Australian artist is a force to be reckoned with.

“It’s always a challenge to work on a song with a lot of people because you don’t always agree on everything, but Will and Timmy are super easygoing and came with great ideas for the song, so it was a smooth process. Will sent us a setup which we loved! We knew the old song and really liked what he did with it. Timmy also thought it was amazing, so we all just worked on it from there.” – W&W

The last artist of the “Tricky Tricky” powerhouse is the esteemed producer Will Sparks. Over his career, Sparks has won the title of ‘Best Breakthrough Artist’ (In the Mix 2013), Australia’s #1 DJ (In the Mix 2014), and Billboard Magazine’s Ten Most Exciting Young Talents. Together, the internationally-acclaimed artists created an exclusive collaboration for the books.

“Tricky Tricky” has been a sought-after track since W&W and Timmy Trumpet played it in their massive Two Is One concept set at AMF 2019 and at the Rave Culture showcase during Amsterdam Dance Event this year. With epic sounds as high magnitude as the collaboration itself, the track is sure to heat up any dance floor at clubs and festivals around the globe. The track is near to the artist’s hearts as a childhood classic, and when discussing the collaboration they elaborated with the following:

“Making music with your best mates who happen to be killer producers at the top of their game is always fun! What else could you ask for?! It’s a remake of a classic we all used to play. Will came to us with the idea first and we took it from there. Really happy with the result!” – Timmy Trumpet

“As a young teen growing up, ‘Tricky Tricky’ was an all-time classic. Originally, I wanted to quickly recreate it so i could play it in my sets. I put a few things together and sent a draft off to the W&W boys to see if they’d be happy to help finish. It really needed their touch, and my god you can hear it!! With Timmy getting on the brass for the break too, it all came together. Without these guys, it  wouldn’t be what it is today. They absolutely smashed it.” – Will Sparks