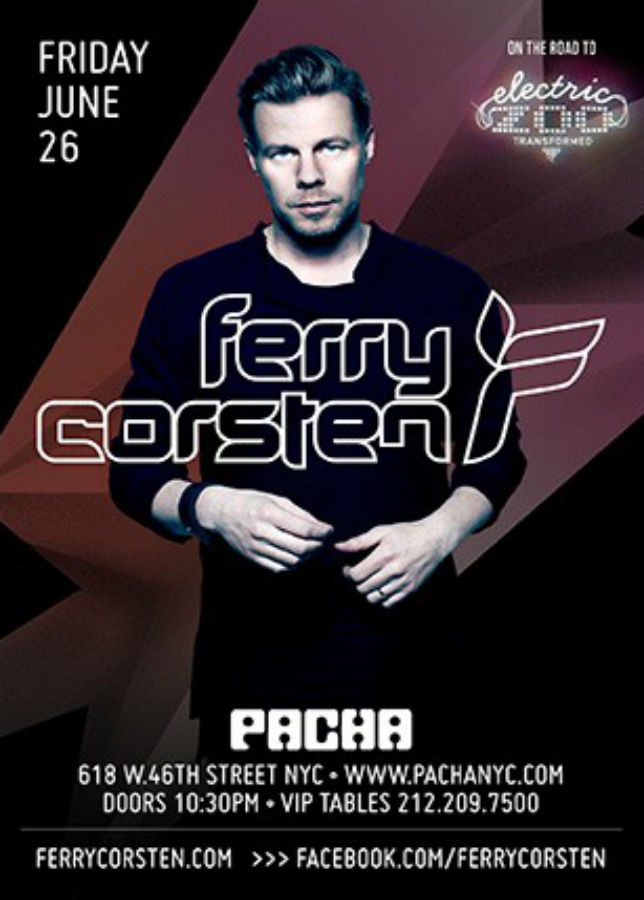 Corsten has been a famed DJ and producer for more than a decade. With studio albums “Right Of Way,” “LEF,” “Twice In A Blue Moon,” and his most recent, “WKND,” Ferry has captured the hearts of trance enthusiasts and electronic lovers alike. Popular single releases include: “Fire,” “Beautiful,” “Punk,” “Galaxia,” “Made Of Love” feat. Betsie Larkin, “Brain Box,” “We Belong” feat. Maria Nayler, and “Live Forever” with Aruna, just to name a few. Collaborative efforts prior to his New World Punx venture with Markus Schulz include projects with Armin van Buuren “Brute” and “Minack,” and “Loops & Tings” with Markus.

The Flashover Recordings boss is no stranger to Electric Zoo or Pacha NYC. One lucky fan will have the opportunity to join Ferry for his Big Apple return in June with a pair of VIP tickets from The Nocturnal Times and Pacha NYC.

Enter to win a pair of VIP tickets to Ferry Corsten: Road to Electric Zoo at Pacha NYC on Friday, June 26 by following the simple entry instructions below.
a Rafflecopter giveaway

Tickets for Ferry Corsten: Road to Electric Zoo at Pacha NYC on June 26 are available here. Add yourself to the list for $10 admission before midnight.