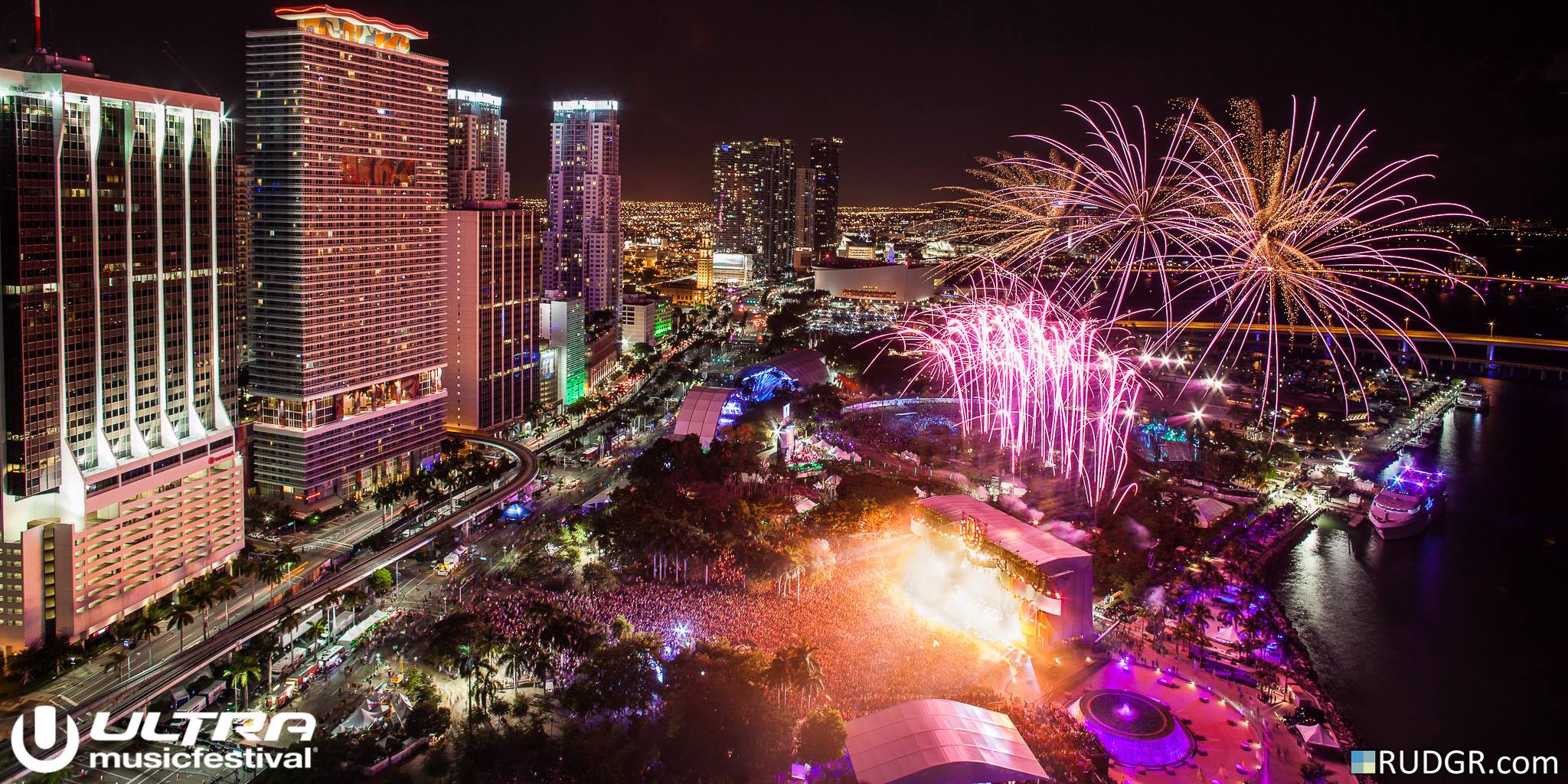 There was no holding back this past weekend at Downtown Miami’s Bayfront Park as the globally renowned Ultra Music Festival returned for its seventeenth edition. Catering to more than 200,000 partygoers this year from Friday, March 27 through Sunday, March 29, the Miami Music Week staple has become an institution. Dance music enthusiasts gathered for what was the biggest installment of UMF to date. Encompassing a total of eight stages, an unrivaled lineup, unparalleled live performances, pyrotechnics, whimsical art displays, and thousands of likeminded individuals, Ultra 2015 was undoubtedly one for the record books.

The three-day spectacle delivered yet another unforgettable experience for Ultra veterans and new visitors alike. Special surprise performances from internationally acclaimed music superstars Justin Bieber, Diplo, Usher, P Diddy, and Ariana Grande set the bar even higher than in previous years, and another thing is for sure, a little bit of rain will certainly not stop the eager Ultra fans. Teaming once again with SiriusXM and SXMElectro, Ultra’s UMF Radio broadcasted live sets throughout the course of the weekend. Additionally, UMF TV aired the live video stream through Twitch TV over the 3-day music festival.

Friday saw scattered showers, often heavy at times, which an abundance of partygoers didn’t seem to mind as they danced the nigh away to live sets at the main stage from Avicii, Alesso, Afrojack, Dash Berlin, Oliver Heldens, and 3LAU.

The rain ceased just in time for the start of dance music icon Tiësto. The iconic Dutch DJ and Musical Freedom creator showcased “Footprints” from his latest studio album “A Town Called Paradise,” and also took fans back in time with his remix of “I’m A Pirate” and famed “Adagio For Strings.” Keeping the energy lifted at Ultra main stage, Tiësto also shared moments with number of special guests including Martin Garrix during their “The Only Way Is Up” collaboration, Dzeko & Torres, Firebeatz during their remix of Rune RK’s “Calabria,” and KSHMR during his massive 2015 collaboration “Secrets” featuring Vassy.

Two-time DJ Mag number one Hardwell took the energy to new heights. Opening with the Hardwell UMF Miami Mash-up of “United We Are” featuring Amba Shepherd and “Don’t Stop The Madness” with W&W featuring Fatman Scoop into his “Countdown” collaboration with MAKJ with “Apollo” featuring Amba Shepherd, the crowd radiated explosive energy. The Dutch DJ and producer also showcased his latest single “Echoes” featuring Jonathan Mendelsohn, “Never Say Goodbye” with Dyro featuring Bright Lights, a powerful mash-up of Hozier “Take Me To Church” with his DallasK collaboration “Area51,” his remix of Calvin Harris “Outside” featuring Ellie Goulding, “Birds Fly” featuring Mr. Probz, and his “Nothing Can Hold Us Down” collaboration with Headhunterz. The lively ensemble showcased a slew of remixes and mash-ups of productions taken from Hardwell’s debut studio album released in January, “United We Are.”

Armin van Buuren took Ultra attendees on a proper trance journey on Saturday beginning with an intro edit of his “Panta Rhei” collaboration with Mark Sixma into the debut of the first single from his forthcoming studio album, “Another You (Mark Sixma Remix),” which features Mr. Probz. Sampling a slew of new mash-ups, Van Buuren included Above & Beyond’s “We’re All We Need” featuring Zoe Johnston with Talemono “Overload,” “Ping Pong” with W&W’s “Bigfoot,” and “This Is What It Feels Like” featuring Trevor Guthrie with “Together (In A State Of Trance.” The A State of Trance creator also uplifted with Dash Berlin “Shelter (MaRLo Remix)” featuring Roxanne Emery, Marcel Woods “Advanced (MaRLo Remix),” Gaia’s “In Principio,” and his new Rising Star production “Safe Inside You” featuring Betsie Larkin.

Trance legend and Armada Music boss Armin van Buuren transformed the Ultra Megastructure into a euphoric paradise on Sunday, March 29. Bringing the A State Of Trance radio show to Ultra is a yearly tradition, which is why hosting ASOT 700 in Miami was no question. Together in A State of Trance, thousands of Ultra-goers gathered at the Megastructure for the ASOT Festival, which included live sets from Paul van Dyk, Eric Prydz, Andrew Bayer, Markus Schulz, Andrew Rayel, MaRLo, Heatbeat, Mark Sixma, and ASOT originator, Armin van Buuren. One of the biggest Miami ASOT events to date, the Megastructure was pouring was trance fans for eleven hours. Each of the nine live sets were broadcasted live to millions of listeners across the globe.

Clean Bandit took to the stage on Saturday to perform some popular songs along with their own productions, including their GRAMMY-Award winning “Rather Be” featuring Jess Glynne.

Goldfish opened the Ultra Live Stage on Sunday, bringing their unique and groovy signature sound. Having just won the MTV Africa Music Award for Best Pop Act in 2014, Goldfish is a duo assured to see a massive breakout in the US this year. As one of the Live Stage weekend highlights, Goldfish set the atmosphere for the remainder of Ultra’s final day.

Porter Robinson showcased music from his diverse, highly anticipated debut studio album “Worlds.” Closing with his famed “Language,” Robinson had Live Stage viewers on their toes throughout his 1.5-hour ensemble.

Kygo provided the serenading closing performance on Sunday at the Ultra Live Stage, which took Kilpsch Amphitheater on a tropical house journey. Starting his one-hour showcase with his remix of Seinabo Sey’s “Younger,” his remix of Syn Cole’s “Miami 82” featuring Madame Buttons, into “Stole The Show” featuring Parson James, Kygo did just that. The hands-in-the-air groovy live set from the Norwegian DJ and producer also included the debut of a track alongside Sia, his remix of Marvin Gaye’s “Sexual Healing,” and of course, “Firestone” featuring Conrad.

Introducing Resistance in 2015, Ultra’s newly added stage offered a complete 360 experience with an underground feel. Secluded in the corner of Bayfront Park, the Resistance stage took things back to where they first began. Located at the bottom of a hill, concertgoers gathered along the grounds and danced within the platforms of the fire-shooting stage. Putting the music first, attendees were completely immersed in the Resistance design, dancing around all sides of the innovate production.

Stage 7 presented a newly added experience to the grounds with its unique design. Built on a platform in a central location, Stage 7, which was sponsored by 7UP brought intimate DJ sets from Ruben De Ronde, Sied van Riel, MOTi, Sleepy & Boo, Orjan Nilsen, Jochen Miller, KhoMha, Ben Gold, Rebecca & Fiona, Alvaro, Stefano Noferini, and Giuseppe Ottaviani, among a slew of others.

There are an infinite number of unique aspects that set Ultra Music Festival apart from the rest. Attracting visitors from all over the world, it is a multi-cultural experience that creates a buzz from the moment the following year’s event dates have been announced. Closing down the streets of Downtown Miami and Biscayne Boulevard, the city comes to a halt as Ultra rolls back into Miami, bigger and better each year. The amount of significant planning, attention to detail, innovation, diversification, and the number of individuals involved in creating the experience and making it come to life each year is simply mind-blowing.

Ultra Music Festival in Miami serves as a testament to the worldwide success and longevity of the brand, which will bring Ultra Worldwide to South Africa, Buenos Aires, Miami, Korea, Europe, Japan, Bali, Chile, and Brasil in 2015.

We’ll see you for the eighteenth installment of Ultra Music Festival at Bayfront Park in Miami on from March 18-20, 2016! Stay tuned for more information on Ultra 2016 as it’s announced.