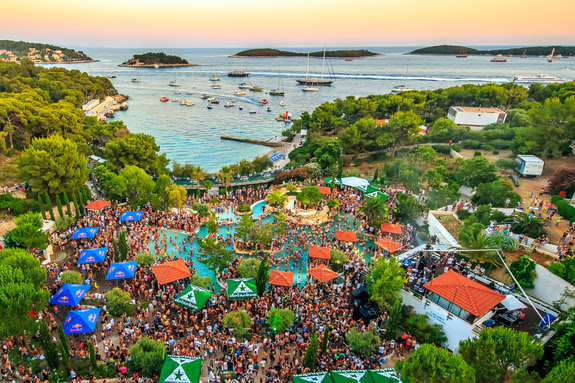 Ultra Europe is already Croatia’s largest electronic dance music (EDM) event, and this year, Ultra upped the ante with its biggest installment yet. Expanding into a historic seven-day event, Destination Ultra welcomed 150,000 partygoers across the week in Split, Croatia.

The site: Four stunning locations along the Croatian Dalmatian Coast. German legend Sven Väth brought the house down at the newly renovated Giraffe Palm Beach Club in Split with a blissful four-hour vinyl only set.

After making its debut at Ultra Music Festival in Miami this past March, the Resistance Stage, which at Ultra Europe was powered by the award-winning Arcadia Spectacular group, hosted techno and house music greats. Resistance included acts such as Guy Gerber, Hot Since 82, Jamie Jones, Marco Carola, Nic Fanciulli, Sasha, and Solomun.

Similar to the monstrosity at the annual Miami edition of Ultra, the legendary Megastructure switched up genres on a daily basis with drum and bass, techno and trance all being represented across one of Ultra’s most celebrated stages. The likes of Andy C, Noisia and Wilkinson hosted on the Friday, before Ultra’s iconic Carl Cox  & Friends stage brought a monster three-hour set from Carl to the party alongside support from his ever-growing stable of friends such as Nicole Moudaber, Yousef and Anna on the Saturday. The Megastructure then closed on Sunday this year in the same fashion it does in Miami each year, with an immense lineup of the finest trance DJs around. Andrew Rayel, Markus Schulz, ATB, Paul Van Dyk and many more cranked up the atmosphere to euphoric levels until the early hours of Monday morning.

It’s another successful year in the books for Ultra Europe. Join Ultra Europe for the fourth historic chapter, which will undoubtedly be even bigger in 2016. For more information and updates visit ultraeurope.com.