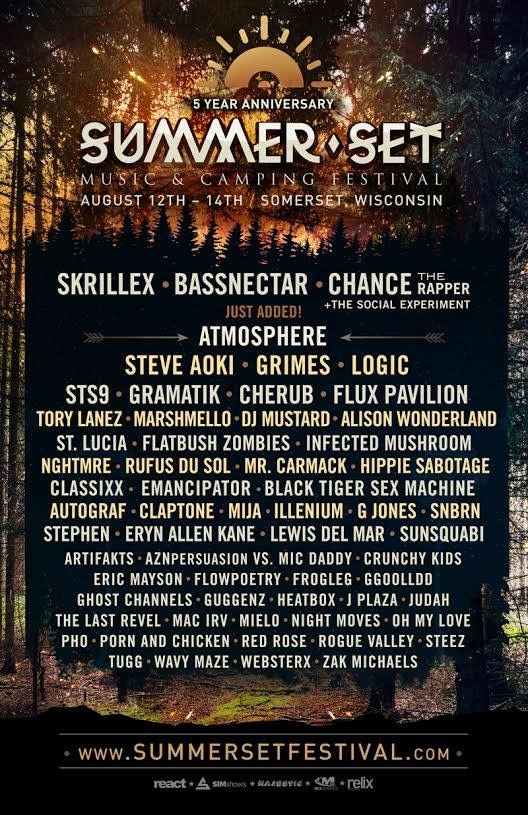 React Presents has announced the official after parties for Friday and Saturday nights at the 5 year anniversary of Summer Set Music and Camping festival this August 12th-14th.

Returning for the fifth consecutive year to Somerset, Wisconsin this August is Summer Set; the three-day and three-night music and camping festival featuring big-name hip-hop, electronic, and jam-band artists, as well as high quality visual production, art, wellness workshops, and more. An on-site after-party for both Friday and Saturday nights has been put together to keep festival goers partying until the early morning.

Friday, August 12th:
Zhu is set to take the stage for the after-party on Friday night. The multi-talented, Grammy-nominated, electronic music producer and singer is best known for his 2014 single “Faded”, which went platinum in Australia and earned him a Grammy nomination for best dance track of 2014. Zhu has also recently collaborated with artists such as Skrillex, AlunaGeorge, Bone Thugs-N-Harmony, and THEY. Zhu is set to release his debut album Generationwhy on July 29th, so attendees can expect to hear a ton of new content from him during this performance.

Saturday, August 13th:
Jauz will be closing out the night on Saturday. Over the course of the past few months we have seen him turn in some of the biggest, genre-bending tracks of the year, as well as taking on the likes of Ed Sheeran, A$AP Mob, Childish Gambino, and more. Jauz has released addictive mid-tempo originals like “Feel the Volume” and remixes like “Hella Hoes” that have left both the festivals and clubs wanting more and garnered him support from industry heavyweights like Zedd, Skrillex, Diplo, Borgore, Destructo, Arty and others. His euphoric originals and viral remixes seamlessly weave in and out of several musical categories, staying true to his creed: “music has no boundaries.”

Tickets for both after parties are on sale now but remain only in limited quantities, HERE. Be sure to get yours now to make sure you don’t miss out!