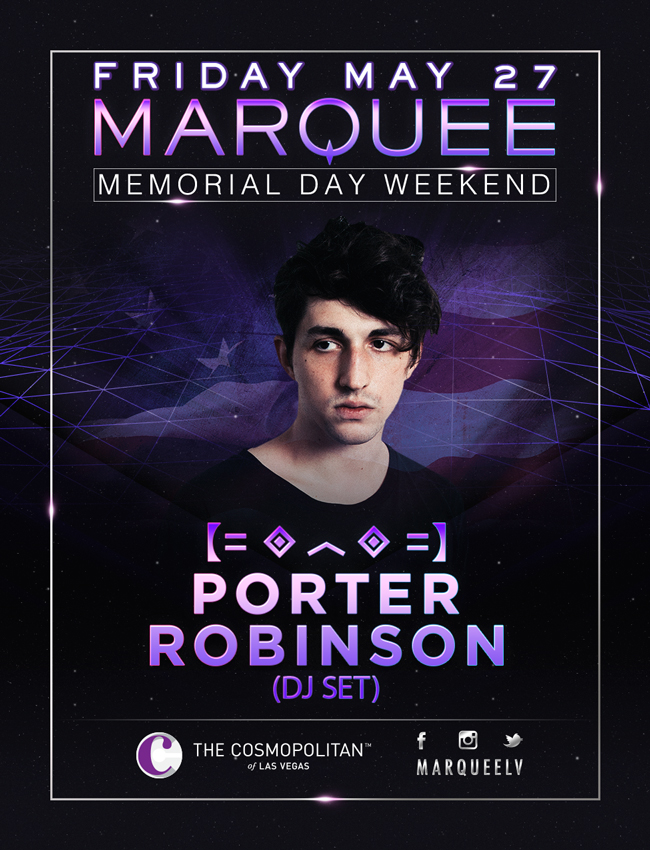 Porter Robinson at Marquee Nightclub at The Cosmopolitan Las Vegas on Friday, May 27, 2016

Unique and original are just two brief words that can be used to sum up Porter Robinson. The producer and DJ, hailing from North Carolina, USA, never sticks to one genre of electronic music, which is what makes his live shows and DJ sets spectacular.

Amid Memorial Day Weekend 2016, Porter takes on The Strip for a DJ set showcase at the Las Vegas nightlife staple, Marquee Nightclub. The indoor/outdoor venue will host the groundbreaking act who exploded onto the scene in 2010. Six years later, Porter has secured himself as one of the most sought after acts in the electronic scene.

Porter has also delivered remixes for Nero (“The Thrill”), Lady Gaga (“Edge Of Glory”), Tim Berg (“Seek Bromance”), and Yolanda Be Cool and DCUP (“We No Speak Americano”), among others.

Tickets for Porter Robinson at Marquee Nightclub MDW 2016 at The Cosmopolitan Las Vegas on Friday, May 27, are available HERE.

For additional information about Marquee Las Vegas and to view their upcoming events, visit http://marqueelasvegas.com/shows.cfm.