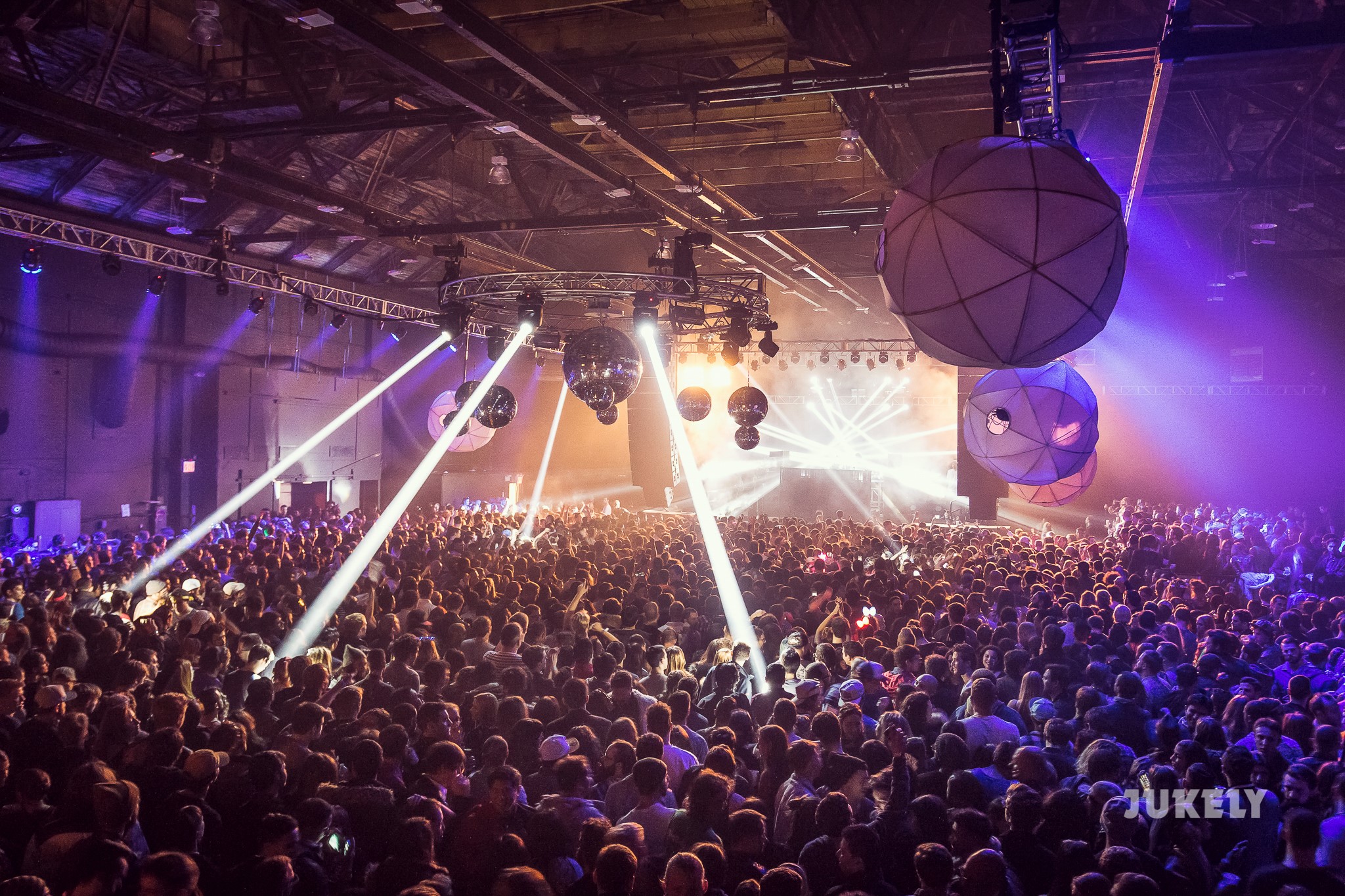 Jukely and Area Event put on a 13-hour, non-stop jamboree that had attendees grooving from classic 80s dance to new future bass tunes. The night itself evolved from one setting to another.

Heading into the Hangar during the early hours of the night, you could hear the faint bass playing in what looked like another pier warehouse under renovation. Upon crossing check ins, you could see two large tents setup for some added warmth and a convenient and fulfilling food vendor setup with hot foods and a variety of drinks. Once you entered the actual warehouse, the first thing that caught your eye was the massive disco ball standing front and center in the middle of the dance floor, while multiple smaller balls surrounded it. Add in a four pack of white transparent orbs cornering the dance floor with neon lighting in the center and you’ve got quite the display.

The first act on the bill was With You, coming off an exciting year with their highlights including a spot on HARD: DOTD and the release of “Felt This,” which was supported by both Annie Mac and Pete Tong. He started the night off with hard dark bass lines, getting the early comers bobbing along to some techno. Later on, With You added some disco house grooves featuring a remix to the late 70s classic, Chaka Khan’s “I’m Every Woman.” A popular trend for the night: Throwing it back to timeless dance hits.

Bob Moses was tasked with getting the crowd primed and ready, being the last set to lead up to the moment everyone was waiting for: The final minutes of 2015. The Canadian duo performed with live instruments including an electric guitar for their strung out guitar riffs, a keyboard, and real time mind-bending vocals. With the duo sporting a seemingly revolving vortex in the background, Bob Moses was casting a spell over the crowd. They were dubbed for the closing performance for Pete Tong’s Live Showcase series, and for good reason. No auto-tune or redo’s when tackling a live set, and Bob Moses did it flawlessly. Mixing a great blend of heavy techno, and playing an intimate live version of “Winter’s Song”—the first song to play on the first episode of The Anjunadeep Edition back in May of 2014—Bob Moses left people in a surreal state of mind.

As the clock neared 11:59 pm, you could see everyone scurrying around trying to get a good spot for the final countdown. By the time the crowd was chanting the remaining 10-seconds of 2015, there was barely an inch to sway with people straggling in to the literal last second. The clock struck midnight and the crowd cheered with a “Happy F****** New Year.”

It seemed like everyone was chattering in an anxious moment of silence as they waited for French electronic music legends, Justice, to drop the sacred first track of the year. Church bells rang like an alarm setting everyone up for the holy team. In a total black out, a lulling bass line slowly crept up and came to a sudden stop as the ambient Cross image from their record ‘Cross’ illuminated. To welcome in the New Year Justice played the up-beat and springy “1999 (Party Like It’s 1999),” making you forget altogether what year it was standing in that warehouse. Quickly you hear the high-hat fill from “Let There Be Light” in the background, which dropped you hard into a skewed “Water of Nazareth” switch. Chills ran over everyone’s body and the crowd roared, as they knew it was time to party in 2016.

The group continued to blow the roof off the warehouse playing an exquisite mash up of Simian’s “Never Be Alone” to Zongamin’s “Bong Song.” Which cultivated into the Justice v Simian iconic track of “We Are Your Friends,” and had the whole floor chanting along. They continued to keep the nostalgia running dropping the Run DMC house party favorite “It’s Tricky.” Justice took it all the way from 80s dance hits, original 2000s rock/French house tunes, and even included the grimey trap remix to the song “Stress” by DJ Snake and Alesia.

Alas Justice did their damage and brought in the New Year in a way no other DJ could. One of the more memorable moments of the night came when Gesaffelstein hopped on stage and Justice raised his arm in triumph and passed the torch—or headphones in this case—to the future of French electronic music. The young French producer took to the decks and instantly took the crowd into a dark realm. He played original hits such as the brooding “Hate or Glory” and the rave inducing “Depravity” to give everyone the grungy feeling of a real warehouse party. Gesaffelstein switched it up a little and had his sirens playing in his Kanye West collab, “Send It Up,” a man of many talents indeed. Not many could or would want to follow up to Justice, but Gesaffelstein certainly held his own.

Leading up to the event, the late announcement of an Odesza after-hours performance had sent attendees into a frenzy. Rumors we circulating all night as to when and if Odesza would be exactly taking stage. Flying across the country from Decadence NYE in Denver, Odesza announced they would be joining the Brooklyn party at approximately 7 am via twitter. As daylight approached and about 10 minutes before 7 am, Odesza hopped on stage. Both hardened dance fanatics from the very first set of the night and a new energized crowd roared with the arrival of the artists. They fittingly opened up with Lido’s remix to “Ain’t No Sunshine” as the crowd danced away to the last moments of the early morning darkness. Soon after the crowd went absolutely absurd with the spacey San Holo remix of Point Point’s “doubleOreo.” With respect, Odesza also playfully spun Justice’s most popular “D.A.N.C.E.” bringing it back to those disco house vibes that were so prevalent throughout the night. To cap off the performance Odesza slipped out with the “Do You…” seductive remix by Cashmere Cat to lighten the crowd back down for the waning hours of the Brooklyn Warehouse party by Jukely and Area Event.

The event had everything you could possibly ask for. Great sound system, top notch production and lighting, iconic artists and modern day trendsetters, hot food options, viable lavatories, four different bars, and a basement booming all night long with anything from techno to trap bangers. Jukely and Area Event set the bar high by bringing in heavy hitters Justice, Gesaffelstein, and Odesza, and did not disappoint in any other aspect either. A well-rounded event that delivered quality, jaw-dropping moments, and an added hint of that secluded old-school rave-warehouse feel. If this was a representation of the year to come, we can only hope it remains this sensational.