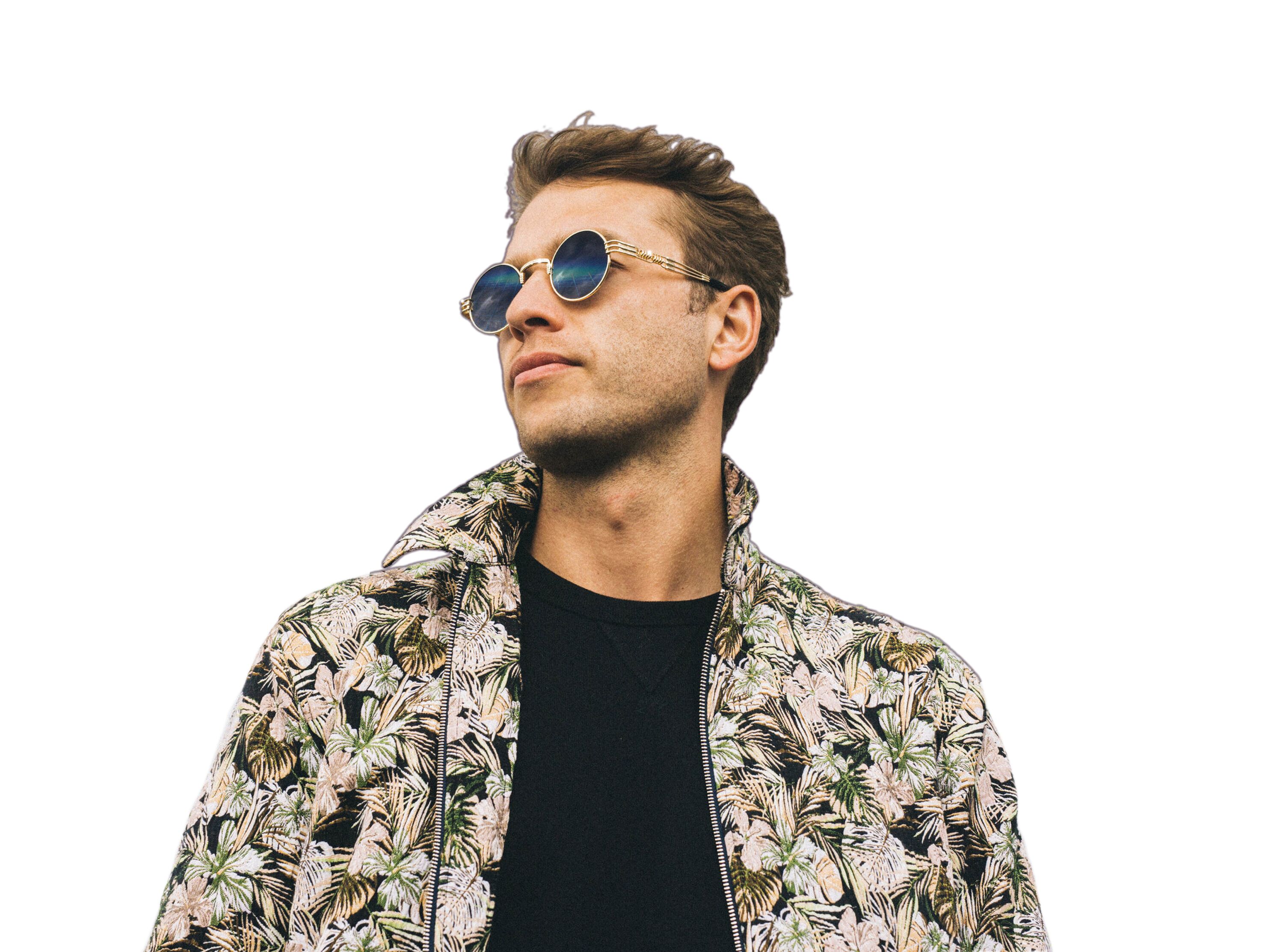 Hailing from across the pond in the U.K., Josh Parkinson is a musical artist of many talents. He was handed a mixer at the age of 13 and unsure of what to do with it, bought a couple blasters and mic to add to the mix and as you can imagine, the rest is history. Climbing his way through a variety of related fields including MC slots, radio play, DJ sets and production, Josh established a name for himself over the years with a certain unique style.

The last few years have been instrumental in furthering the young and thriving artist’s career, with his 2016 summer tune “No More” racking up over 5 million plays and a feature spot on the 2016 Ministry of Sound Annual. This and a variety of other remixes have been regulars on BBC Radio 1, 1Xtra, Kiss FM, and Capital FM. Smashing the Shazam charts is yet another addition to his repertoire, even hitting Number 11 on the Shazam UK dance chart. Now very much involved in the radio scene, Parkinson returns each Friday from 12-2pm on Select FM, London’s longest running house music station.

Beyond his musical gifts, Parkinson spends time as a model under Select Model Management and has been featured in dozens of magazines including GQ, Esquire, and Vogue, and worked with the likes of some of the world’s biggest fashion designers such as Prada, D&G, and Calvin Klein.

Read below for our full Q&A where we discuss Josh’s road to present day, affinity for MCing, sound development, radio gigs, upcoming projects and more!

Nocturnal Times: Congratulations on your first single of 2019! “Alternate” was making waves long before it was officially released, largely from being one of the most requested IDs on the Identification of Music (IOM) group on FB. How does it feel to finally share it now, knowing that it was so highly requested by fans?

Josh Parkinson: Thanks so much. Yeah, this one has been a bit of a journey! I didn’t even know what IOM was at first. A couple of my mates messaged me saying the track was popping off on there, so I got them to send screen shots haha! It felt great knowing it was getting such an amazing reaction as the 2 videos that got posted were of the first times it ever got played out. That was in July! I had messages every day about it for months. It was a great feeling but also really frustrating to not just be able to get it out there sooner. It is what it is though and I think it’s all ended up timing nicely.

Nocturnal Times: “Alternate” was premiered by BBC Radio 1’s Pete Tong. What other acclaimed artists or stations would you hope to see premiere or feature your music in the future? (Either on radio or in a live set/ collaboration, playlist, etc.)

Josh Parkinson: It’s always an amazing feeling hearing people like Pete Tong dropping your tunes on the radio. But being involved with radio myself it’s a funny feeling. Because you know people are listening somewhere…but you can’t see their reactions! It’s all about seeing the energy. So for me I’d love to see some videos of it being played out. 3 names for me that I’d be buzzing to see playing it would be Fisher, Camelphat and Solardo and equally I’d love to collaborate with all 3 too.

Nocturnal Times: Walk us through the evolution thus far of your sound. How did you develop the style that you produce today? Were there any mentors or role models that helped shape you, or even your background or home?

Josh Parkinson: My taste in dance music started very much with the heavier stuff. I used to be obsessed with Drum & Bass/Jungle. I would always have my walkman at hand. I even got disqualified from a GCSE exam because I had the cable going up my sleeve and had the headphone in my hand to listen to music while doing it haha. I even used to put it on to go to sleep! I was obsessed. I fully fell in love with it when I went round one of the older lads’ house and they were having a mix and MCing. I payed one of them £5 to record him MCing over ‘The Chopper – Ray Keith (Shy Fx Remix)’ That was actually the first tune I officially fell in love with! I was 13 at the time. From then on I started trying to MC (more so because I couldn’t afford decks or production equipment) and you could do that wherever.

I then started to DJ in my mate’s pub when I was 15 and would take the equipment home to practice with before having to take it back for the night. I then started getting more into garage when I started going out out at 16, which then for me evolved more into the grime side as well. I’m from a place called Broadstairs and the clubs used to be in Margate. They would occasionally get people like EZ down and looking back I was relentless! I would stand at the DJ booth just asking for the Mic. (From age 15-19 haha!) They would eventually give in and see how I was… Then would just let me stay on and host their sets. So much so I remember walking into a club in Malia when I was 18 and heard someone over the Mic shout “JDP come get your microphone” (That’s my MC alias.) It was MC Viper who I’d also pestered before in Margate to give me the Mic ha.

From then on I dipped in and out of music and was a lot with the I randomly got into. One of my best mates I met during all that was into music too and we loved Dubstep at that time (when it was good! Skream, Benga, Hatcha, Joker Vibes) and we joined together to make a duo. As time passed, our styles started to differ and I went solo and started making House. I went a bit flowery with it for a bit as it was fun playing about with the sound, but now I’ve fully I just love a rolling bass line! I’ve been trying something for a while now that’s a bit taboo in the House scene, but I MC and host over my own sets. I totally get that some MCs shouldn’t do it as the vibe’s not right, but knowing when to shut up has been a weird compliment I get with it ha. And it’s all about just good vibes and good energy. The past year I’ve really felt like I’ve found my sound. A lot is unreleased at the moment, but I can’t wait to start getting it out there for you to hear.

Nocturnal Times: Tell us about one of your productions that holds the most inspiration or meaning for you. How did that inspiration translate into the end product?

Josh Parkinson: I actually think “Alternate.” When I was making it I was like, oooh am I pushing it a bit too far with this sound, but it made me that you shouldn’t listen to other people with that kind of thing. If you like it and it lifts you up, then you’re doing something right. I’ve also a lot of my tracks are a bit like Marmite. You either love it or hate it… and I like that about them. There’s much music out there that just sounds the same as the next track and are just “alright” (I can flick through Beatport for hours sometimes and only buy a handful of tracks.) I feel like with this one it just makes you have an opinion. Be it good or bad. There’s actually a version of it that has an amazing speech by Stephen Hawking on it that was on the original track, but has now become a VIP as clearing the sample was proving hard… It’s annoying as the speech is SO poignant for our times right now. I love dropping that version out. It goes off if I do say so myself haha!

Nocturnal Times: How did you become involved with Select FM to be one of their Radio DJs? Do you plan on sticking with this venture for a while?

Josh Parkinson: I was DJing at the after party for one of The Manors Koko shows and playing before a couple of people who run it. I was MCing over my set and they asked if I’d ever thought of radio as I had the voice for it… and the face ; ). I went in to meet with them and got offered a Sunday slot 2-4pm. Was a bit of a slog at first as you can imagine at the back end of the weekend when most of the time I really didn’t want to leave my bed with a stinking hangover haha! I did that for a year and then got offered the Friday 12-2pm slot which I’m loving. It was funny when I started as coincidentally my modelling agency is called Select too. And genuinely some people thought they had started a radio division for when we start to lose our looks haha. But yea, I really enjoy radio and definitely want to take it further.

Nocturnal Times: You’re gearing up for a show during Miami Music Week at the DVine Sounds party, who released your previous EP. What can fans expect for this performance?

Josh Parkinson: I can’t wait for this one. Playing alongside some absolute beauts. Sam loves the MCing over my set so always go for it with the DVine gang. It might be funny to see the crowd reactions in America, as they find it such a shock when the skinny, English white boy starts dropping bars haha.

Nocturnal Times: What else does 2019 have in store for Josh Parkinson, music related or otherwise?

Josh Parkinson: I’m looking forward to just going all in this year! I’ve got a release coming out in March with On Circle Music and one in April on Another Rhythm who released ‘ Alternate’. I’m making so much music at the moment and my favourite I’ve ever made so hopefully it just keeps going down nicely and we’ll see where it goes. Other than the House stuff I’m also writing an album for my alias JDP with totally different varied styles. I can’t wait to get some of this stuff out there. I’m using it as an output to just make anything I like and to be able to do stuff outside of the lane I’m in with the House bits.

Thanks for having me Nocturnal Times. See ya! 🙂