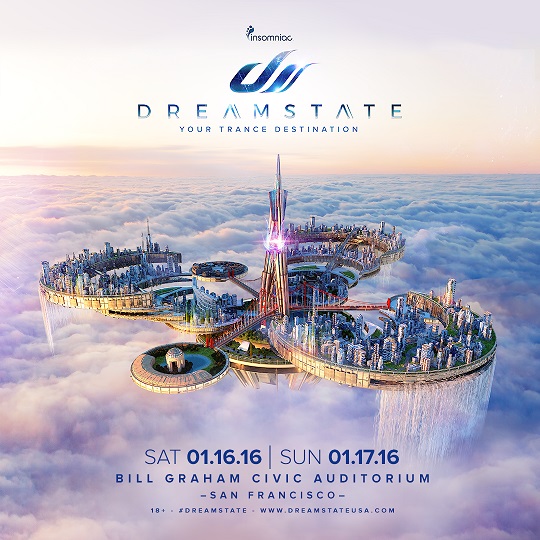 Trance music is alive and well, and Dreamstate is celebrating the genre with its second installment in early 2016. Insomniac Events—the creators of the famed Electric Daisy Carnival (EDC)—has announced the San Francisco edition of Dreamstate will land at the Bill Graham Civic Auditorium on January 16 & 17, 2016.

The lineup for Dreamstate San Francisco will be revealed on October 5. Check this space in the coming week for the performance roster.

Dreamstate USA’s inaugural installment will take place on November 27 & 28, 2015 at the NOS Events Center. The first ever Dreamstate USA, which will dominate Southern California, sold out in only four hours. Acts such as John O’Callaghan, Orjan Nilsen, Giuseppe Ottaviani, Simon Patterson, and more will perform at the SoCal edition of Dreamstate.

Early Access Tickets for Dreamstate San Francisco will be available starting October 13 at Noon PT. Register to purchase tickets at DreamstateUSA.com. Fans are encouraged to do so as soon as possible as there is a limited allotment of tickets.