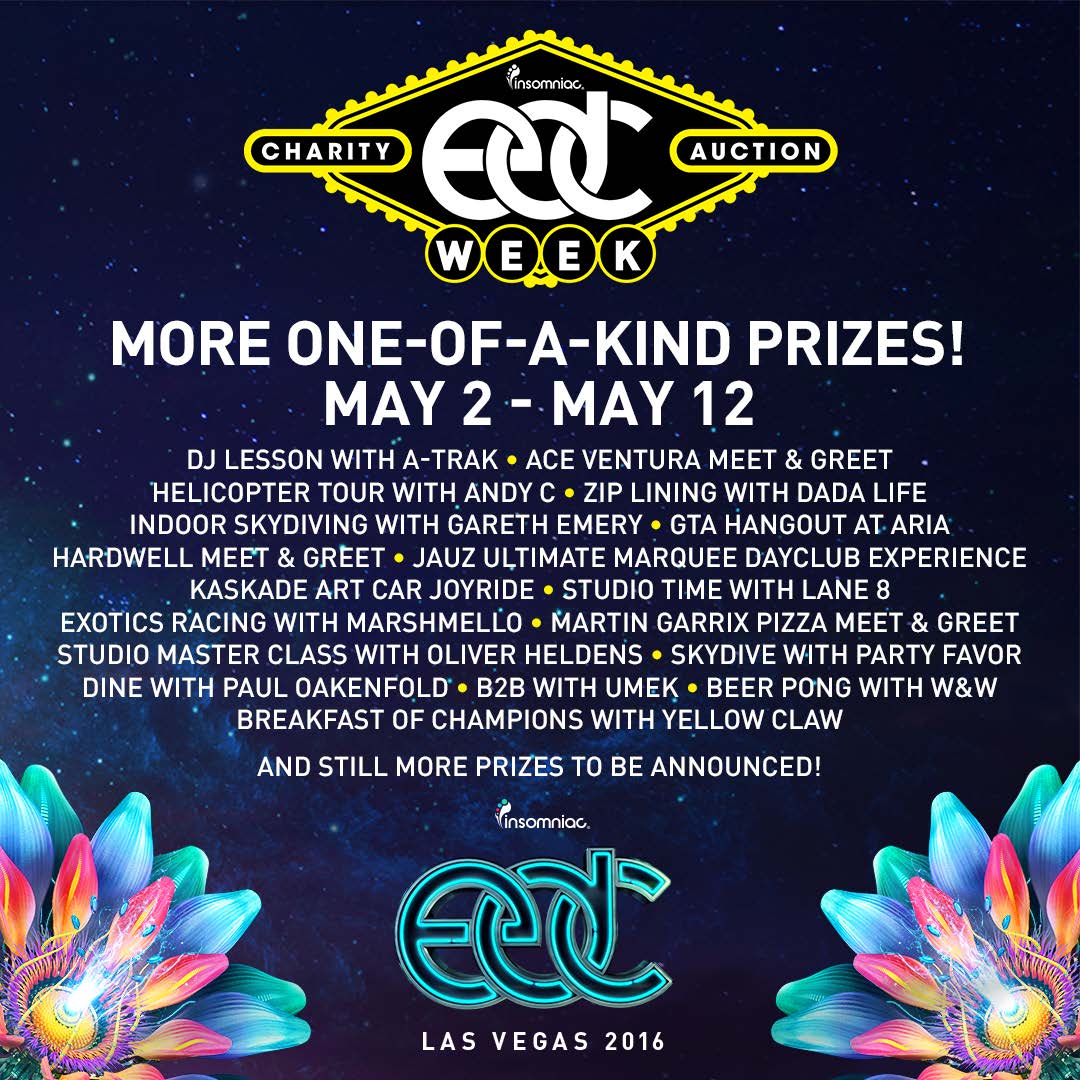 In this year’s upcoming EDC Week, Insomniac and eBay will be offering a charity auction with special packages and proceeds going to the Shade Tree organization

Giveaways for tickets have been going on since the beginning of live events, and in recent years the rewards have certainly gotten sweeter. Mediocre VIP access, guestlist, and bottle service are all great prizes in themselves, but the EDC Week Charity Auction will be offering once-in-lifetime experiences you simply cannot duplicate.

As of the first two waves of items to be announced,  there are 71 spectacular prizes open for business. With so many options you can go for an artist based prize, a Vegas-friendly nightlife package, and specific Insomniac related access that’s not available by any other means. Phase one was released on Wednesday April 27 and it will be closed off tonight, May 6 at 12:00am PST, so make those last minute bids while you can.  For Phase two, a flurry of new prizes were added on Monday May 2 and will be open for offers up until 12:00am PST Thursday May 12.

It’s pretty agreeable EDC Las Vegas might be one of the biggest stages to play on in the entire festival circuit. As one of the artist bids, UMEK will be offering a B2B set co-starring you. A two person bundle of backstage passes will be given by UMEK and his team to the highest bidder. If you really want to master the art of production, why not learn from one of the best? The man behind the new project This Never Happened and some absolutely touching live session work, Lane 8 will be doing a face to face one-hour session discussing music production with you. Vegas is a big place with lots to do so if you need a breather from the tunes, Gareth Emery is inviting you for an indoor skydiving trip for two. Get the chance to see an artist outside of the music and enjoy himself floating in air.

There are various EDC Las Vegas VIP packages up for grabs, however is there anything quite like Pasquale Rotella’s personal offer? He’s asking for two people to join in him watching kineticFIELD from his private cabana, the actual best seat of the house. Get the perfect view of one of dance music’s most theatrical stages with the man who’s vision and will made it all happen. The celebration never quite stops in Las Vegas, so that’s why Marquee is offering you both a Dayclub and Nightclub package for you and five of your friends. A $1,000 credit and their best daybed/balcony spot are up for grabs to live life lavishly during this year’s EDC Week.

All the proceeds from this first-of-its-kind auction experience will be donated to the Shade Tree. The Shade Tree is an organization giving basic necessities to those in need targeting homeless and abused women and children. You’re not only bidding for an unforgettable experience, but to also helps those less fortunate than ourselves.

Go directly to the eBay bidding page featuring all items up for auction HERE.

Watch the trailer for the first ever EDC Week Charity Auction below: