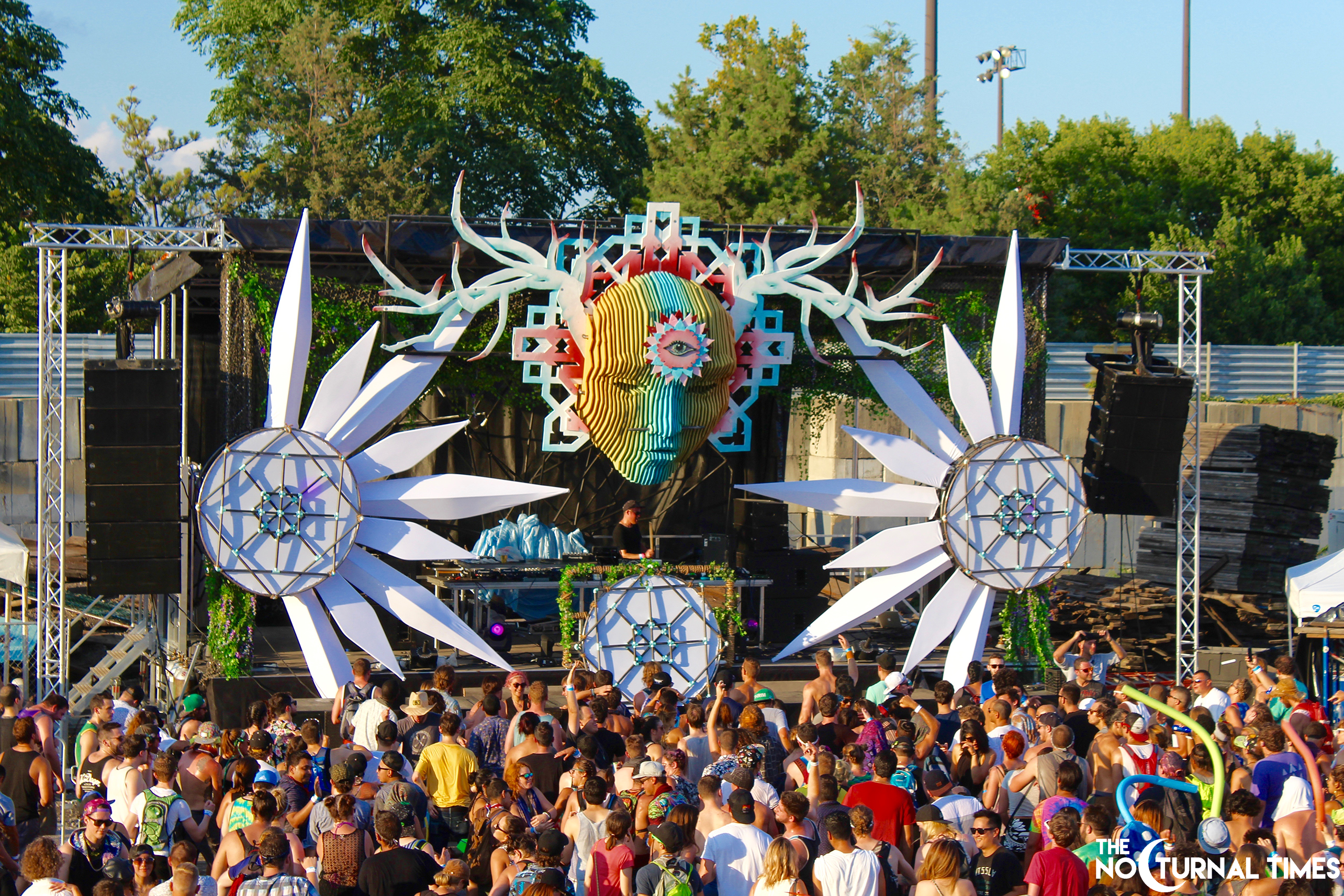 This past weekend’s heat warning still couldn’t put a damper on the Elements Music and Arts Festival, a must-attend East Coast get-together from the team at BangOn! NYC

Upon entering the festival, to the immediate left you heard the rumbling of the Water Stage. Being the first stage to greet you into the Elements Music and Arts Festival, it wasn’t anything to scoff at. The Mixmag team helped curate this stage, and drew in some of the festivals biggest rising names such as the budding Deep Chills, Claptone, and the current juggernaut of melodic house Klingande. If all the grooving and dancing got you too hot, they also had a shaded tent area in the back row. This stage rose well above the packed crowd, with access only being obtained through a twisted flight of stairs. It resembled an art car with the covered shaded canopy, giving the various artists a break from the New York City sun.

Following the main path of the Elements Music and Arts Festival you hit a corner pier with a deep stacking crowd vibing to the sounds of the Zero Air Stage. This stage was tucked away in its little corner between an inhabited large ferry and a massive rusted out transport ship. The deep rows of attendees at the Zero Air Stage were given shaded covering from above, allowing for non-stop movement throughout the entirety of the festival. The house party was brought with Yokoo, which kept the corner stage packed all night, lining the entirety of the neighboring freight ship. Yokoo brought the crowd, but Blond:ish capped the night at the Zero Air Stage with their mixture of experimental and housey beats.

A quick 180 from the Zero Air Stage saw the belly of the BangOn! NYC festival. Separating the festival from the front end to the back you had to stroll through a plethora of local food stands, art installations, and trendy festival accessory vendors. One of the biggest pit stops of the festival was the gargantuan skeletal structure, that was configured with an intricate system of ropes and pulleys enabling attendees to literally make the skeleton move. A couple bright eyed fans were smart enough to figure out how to even stomp his feet to make it look like he was shuffling away. Located behind the giant skeleton was a thorough art gallery inside one of the abandoned warehouses on the waterfront. There was ample shade and seating within it. A little break from the music and sun, this pop-up gallery served as the ultimate relaxation spot.

Traveling past it further towards the main Earth Stage, you first had to walk by the numerous boutique vendors. The simple yet widely popular Braid Bar was set up for long-haired attendees. The seats were constantly being filled and people were still lining up to get their latest in festival hair fashion even as the Braid Bar began to break down its shop. This wasn’t the fun activity in support of current festival trends, there was also a full-fledged body paint and glitter station. Adding another layer of color to the already vibrant Elements Music and Arts Festival, just about every other person walking around looked as though they had made a stop at one of these locations.

Neighboring the Vendor Village you had the indoor stage brought to you by the Desert Hearts team at the Fifth Element Stage. This stage was the epitome for dark underground ravers. The major form of lighting came in the various wall mapping images giving luminescent portraits against the warehouse walls. The images were tall and stacked side by side ever constantly morphing and shifting shapes. It looked as almost the stained glass portraits one would see at a church. Various members of the Desert Heats team spun from 4-10 and served as the must-attend stage of the festival for all the free-spirited music fans from Brooklyn.

Perhaps one of the most creative stages was the Fire Stage. The Fire Stage was primarily built from scratch. The outer walls were created with construction cinder blocks and stacked wrecked vehicles. Fans couldn’t help but play around on the objects, and even the warnings of security couldn’t keep people from climbing around and dancing on the crushed vehicles. Govinda played a transcending liquidy and bass filled set including either all original productions or remixes from the man himself. A highlight had to have been his tripped out version to Alina Baraz’s “Pretty Thoughts,” providing both a familiar sing along and enough energy to kick up the dust in the isolated pit of chaos.

The team at BangOn! NYC carefully laid out this year’s Elements Music and Arts Festival in a manner promoting both recreational fun and music fueled madness. Leading up to the main stage of the event, the Earth Stage brought to you by Girls + Boys, there was one last mecca of entertaining activities to take part in. You had a virtual playground of fun sculptures, dancing playgrounds, and extreme sports to entertain yourself before succumbing to the bass filled mainstay of the Elements Music and Arts Festival.

Bridging the last gap between Vendor Village and the tip of the festival with the Earth Stage, BangOn! NYC had constructed and adult playground with various types of metal structures for all attendees to play on. A Lyra hoop was set up and provided both an open platform for ripped up bros to get a quick pump on, and festival fairies to spin and stretch on ever so gracefully. If that much physical activity wasn’t exactly your style you also had a raised metal nesting spot holding itself together with a mesh rope net.

Conveniently located next to the play station were the sprinklers, shower head, and water-fill station for people to keep safe with hydration and cool down through the blistering heat wave. A must have amenity for the scorching summer weekend at this year’s Elements Music and Arts Festival. Once cooled off there were several buses turned art cars available for visitors to explore. The buses were nearly constantly filled and had people dancing on the roof within the metal cages in seductive form. It gave one of the best eagle eye views of the entire festival, and the perfect outlook for the Earth Stage. On the side of the crowd was the water ramp, which played host to professional wakeboarder Steel Lafferty launching into the Brooklyn waterfront. Not something you can say you see at the numerous festivals of the season.

The Earth Stage was the certified spot to be across the whole grounds of the Elements Music and Arts Festival. It carried notable acts from the very first set to the closing live performance of Gramatik and friends. You had 2016 festival regulars Bleep Bloop, funk and bass from Opiuo, and the sometimes ambient sometimes spacey Oshi setting the mood early for a night of weirdness at the mecca of the festival, the Earth Stage.

For all the basshead fans of the event, the Earth Stage was the spot to be. Between the New York City regular Ghastly and OWLSA’s latest prodigy Mija, it was tough to tell who threw down a harder set. These two young stars have had quite the busy festival season, and the word has spread around the dance music community that these two bring nothing but energy and excitement anywhere they go. Ghastly approached the stage around the 7pm mark playing in the last of the lingering light. He played an no-holds-barred set featuring the Drezo remix to “Bodies” and even seemed to fit the Papa Roach classic “Last Resort.”

Following Ghastly’s intense set was Mija and she was more than capable of following the chaotic performance. She did an excellent job of mixing up bass-fueled bangers and also bring some heartfelt emotion into the set with her song eclectic selection and mixing. The Graves favorite “Say Things” was a good statement song reflecting the overall mood of her set. She’s also been showing some love to the hardcore dance scene with her recent surprise upload of the “Secret Happy Hardcore Mixtape,” and incorporate this genre within her Elements Music and Arts set as well. As loud and in your face as her set was, the feels were also heavily present for her post sunset performance.

Potentially the biggest crowd pleaser of the entire festival had finally arrived with a scheduled Gramatik set for over 1.5 hours of live tunes. The Lowtemp label boss has been in the music industry for quite some time and built his own way through his cool soulful tracks incorporating many different styles of music into one. Live performances from Gramatik are a treat, and in particular Elements Music and Arts Festival got the five-star package with a live guitar and vocals from Lowtemp’s Gibbz. The combination of live production and instrumentals from Gramatik and the fervent vocals of Gibbz had given the Brooklyn crowd the absolute crescendo of a good-vibes party. Throwing in some bass heavy tunes such as the Mr. Carmack “Pay For What,” he played an even keeled set of pleasing funk and rambunctious bass tracks to close out the Elements Music and Arts Festival with a bang.

The Elements Music and Arts Festival was everything you could’ve sought out in a modern day hipster’s musical paradise. One could be kept busy for hours solely within the numerous art installations and galleries, the eye-grabbing chic festival vendors, and of course a killer lineup feeding the needs of a variety of dance music fans. Even through an excessive heat warning BangOn! NYC conducted itself in a professional manner providing more than adequate shading for the droves of attendees and refreshing options to cool off at the water station. You didn’t have to be the world’s most knowledgeable dance music lover or a seasoned Burner to feel at home with this unique extravaganza of the Elements Music and Arts Festival.