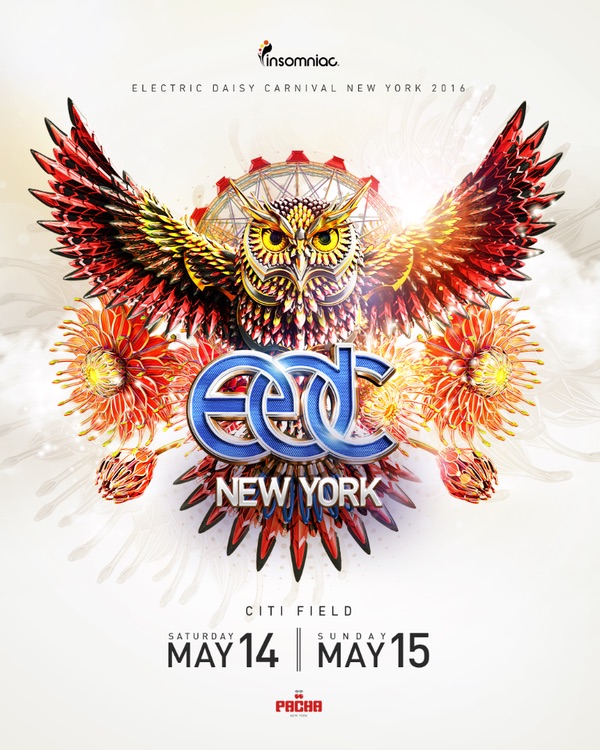 Insomniac and Pacha NYC have announced the return of Electric Daisy Carnival (EDC) NY to Citi Field in Queens New York for its fifth annual installment on Sat., May 14 and Sun., May 15, 2016.

After a stint at Citi Field in 2013, EDC NY returns with a new and improved design, which is different from the layout at last year’s MetLife Stadium. Pasquale Rotella, founder and head nightowl at of Insomniac, listened to electronic dance music (EDM) lovers advice by tackling the stage setup as it was one of the headliners biggest issues with 2013s display. He even took the step to release an initial festival map to ensure the sound quality and layout will be better than ever.

Carnival Square, the functional Insomniac Hub for everything from art installations to festival necessities such as Lost & Found, will be making its East Coast debut. Placed in the center of the festival, it makes for an easy meet up spot with tons of activities to keep you busy.

In a statement from Rotella, he explained: “Happy to announce EDCNY returns to Citi Field and back to NYC proper! And YES, we have handled all the issues with layout and sound that didn’t work at this venue in 2013. We live and learn! We’ve got a new festival footprint that will leave more room for the stages, carnival rides, roaming performers, and interactive art installations. It’s gonna be bigger and better than before. Can’t wait to see you all in the Big Apple! 🍎😎🗽🎡”

On the road to EDC Las Vegas. which is celebrating 20 years under the electric sky in 2016, the New York edition of Electric Daisy Carnival will include the Crystal Village main stage at kineticFIELD. Insomniac’s productions are never lacking and EDC NY 2016 is sure to include EDM’s biggest names, live performances, interactive entertainers, pyrotechnics, and YOU!

The full lineup for EDC New York was revealed on Feb. 11, which includes the addition of Dreamstate, the ultimate trance destination. The lineup for EDC NY 2016 includes:

When two powerful nightlife empires such as Insomniac and Pacha NYC/RPM join forces, the results are colossal. Shifting a two weeks ahead of its usual Memorial Day Weekend (MDW) placement, EDC NY is slated to pioneer its way to Citi Field, the home of World Series contenders the New York Mets, on May 14 & 15.

Get your 2-day GA or VIP passes here and don’t miss out on a fully recharged EDC NY!