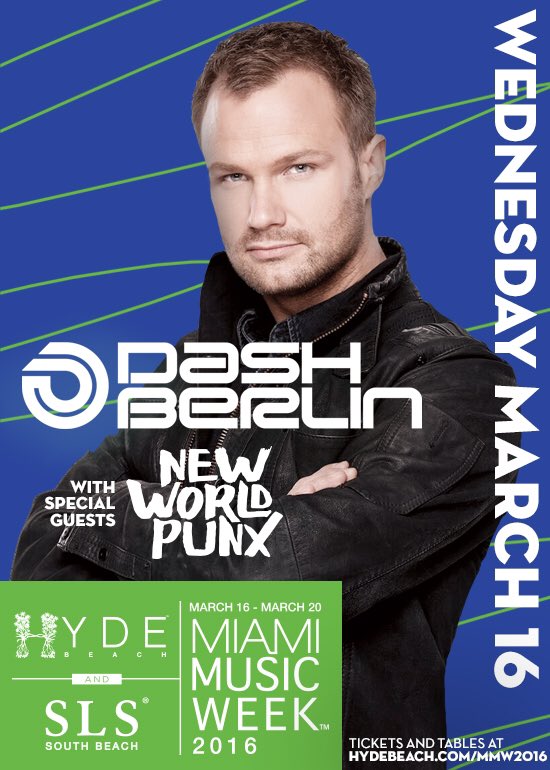 The Miami Music Week party announcements just keep getting better! Dash Berlin and New World Punx are teaming up with special guests to throw a daylong, trance-filled party during this upcoming MMW.

The party is being held at always-buzzing Hyde Beach and SLS South Beach from 12PM to 12AM, on Wednesday, March 16, 2016.

Dash Berlin is no stranger to Miami’s music scene, as he recently played at E11EVEN Miami during their Ultra Music Festival Countdown, on February 12th. He posted a video on Instagram, of the packed nightclub and captioned the video, “This was at 6:15 in the morning #neversleep.” After his unforgettable set during Ultra 2015, Miami partygoers can definitely expect a high energy, stellar performance at this anticipated MMW event.

Trance’s favorite duo, New World Punx (Markus Schulz and Ferry Corsten), will also be headlining Hyde Beach. These two have been dominating the trance scene for years, and have become an unstoppable force since they decided to combine their talents. Besides releasing over a dozen singles last year, Markus Schulz has also earned a 2015 IDMA nomination for his track, “Desinty.” His partner in crime, Ferry Corsten, is also known for his many hit singles and his aid in the trance revival of 2015, sparked by the success of the first ever Dreamstate. After the successful return of his alias, Gouryella, with his new track, “Anahera,” Corsten made the decision to bring him back to life with a live performance sometime this year. Dates have yet to be announced.

More additions to the party are soon to be announced. Trance fans will definitely not want to miss this one!