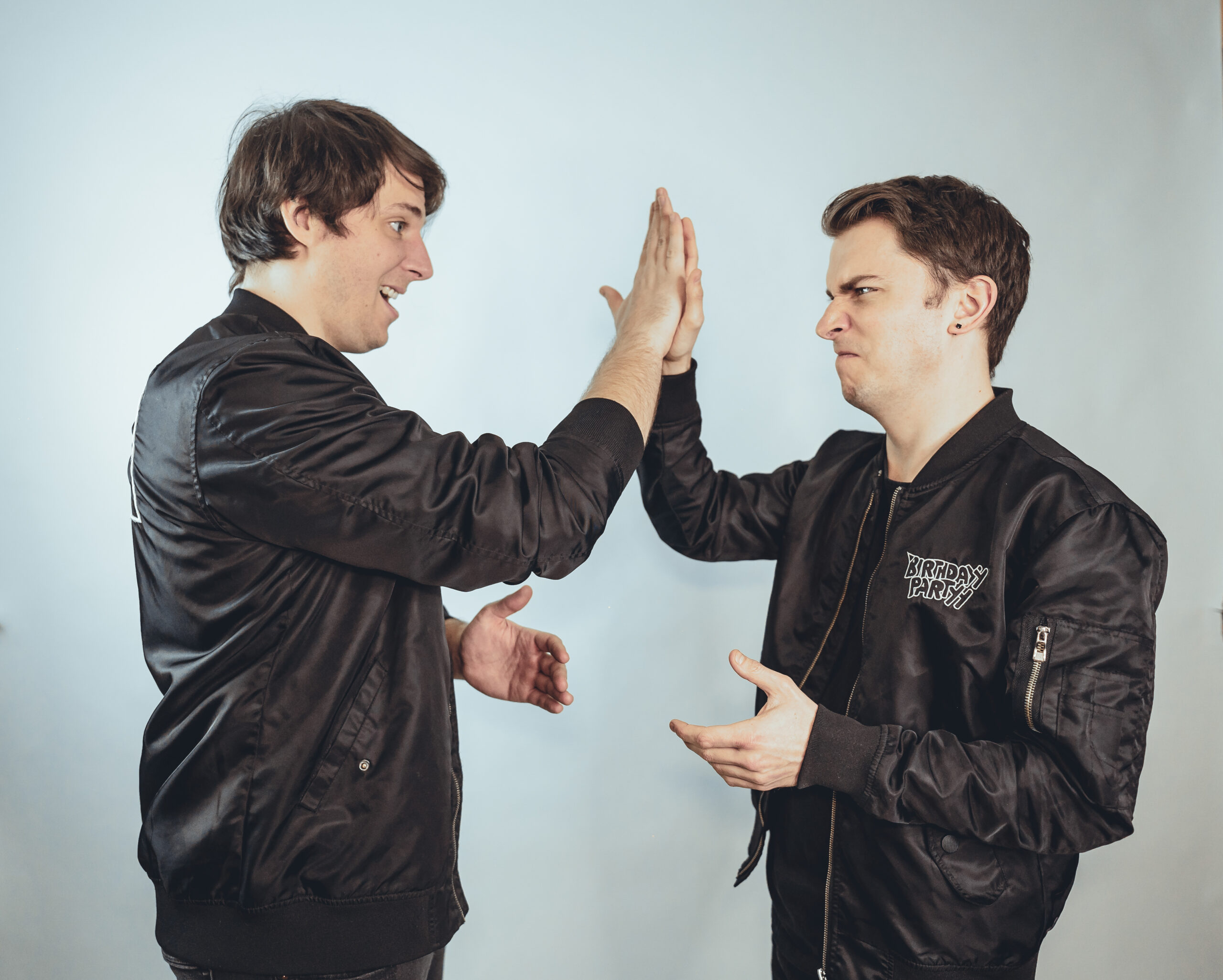 Birthdayy Partyy is a Chicago-based electronic duo that has been making waves in the electronic music scene over the past couple of years. They have released their four-track EP, Classic V Future’ and fans and listeners are bumping the tracks as each possesses its own unique sound and characteristics.

The EP consists of singles, “Revival,” which is a hard-hitting dubstep banger, “Classic V Future,” an energetic bass house tune, “Handle Ya Business,” a funky chill track, and “Let Go,” a blend of hard-hitting house and minimalism.

They initially debuted their project at EDC Las Vegas and have quickly grown in popularity within the scene. Their music has been featured on various playlists and more, and they have played at some of the biggest festivals in the country, including Spring Awakening, North Coast Music Festival, and EDC Orlando.

Their sound is unique and easy to define, but it can be described as a mix of electronic elements and sound design that will get you moving. If you’re looking for something new and exciting in the electronic music scene, be sure to check out Birthdayy Partyy.

Birthdayy Partyy: We used to say we got into electronic dance music in around 2009/2010 with dubstep. Skrillex, Flux Pavilion, Zeds Dead, and the like were some of our first tastes of electronic music that clicked with us. But something that I’m realizing more and more is that it actually started a little earlier than that. The more we thought about it, we realized that our first REAL exposure to dance music that we vibed with was Daft Punk’s “One More Time” and 3OH3!’s album “WANT”. For some reason, that album got pushed along in a very similar vein as the pop punk / screamo we were listening to in high school, and I remember thinking “wow, this is super cool and different. I have no idea how to make these sounds on a classical instrument like a guitar.” Since we grew up playing instruments (Jon played the guitar, and Bryan played guitar, drums, bass, piano, and sang a bit), not knowing how a sound was made was always something that intrigued us and guided us to the music we listen to and make now. We love exploring crazy sounds and making music with noises that are unique and interesting, yet somehow familiar and musical.

The Nocturnal Times: When did you guys meet and how did you first decide to form a musical partnership?

Birthdayy Partyy: We’re twin brothers, so in the womb I guess. We’ve always been involved in music in some way, but never together until we went off to college and really dove into electronic music. I (Jon) learned to DJ at a house party one night, and shortly after, Bryan happened to buy a DJ controller. We’d messed around with music production a little bit earlier than this, but once we started DJing for little after-hours parties we’d throw at our apartment, we quickly figured out that we wanted to take things further than we could as just DJ’s. We wanted to actually MAKE the music we were playing. We had some local success as our solo aliases, but we were always getting booked together anyway because people see twins and always think of them as a single unit anyway. At a certain point we decided we were going to be better off combining our efforts behind a single project, and so for about a year and a half we put all of our production effort into the project and launched Birthdayy Partyy! That was just over 5 years ago now, but it feels like a lifetime.

Birthdayy Partyy: Since we’re twins, we’ve always shared a birthday party. Its where you can spend time doing what you want to do with the people you love, and most importantly, you should be having a ton of fun. Plus, who doesn’t want to be invited to a Birthday(y) Party(y)?

Birthdayy Partyy: This is our first EP, celebrating 5 years of the Birthdayy Partyy project. It’s about celebration, growth, and having a good time. The whole concept of the project since its outset is the melding of elements of music we grew up on with what we see as the current and future sounds of electronic music, like heavier bass music sound design and interesting effects. Classic techniques like sampling in specific ways to emulate the technology available when electronic music was first rising to prominence, sounds from old drum machines and analog synths, and making an active effort to pull from the city of Chicago’s rich history as the birthplace of house music, while using more modern production techniques and sounds to complement them is where we’ve found our sound. It’s all about the juxtaposition of new and old, timeless and the sound of right-now, hence the name Classic V Future

Its also kind of a turning point for us, touching on the sound of our musical direction going forward, while also leaning on what’s gotten us this far. We’ve been slowly stripping things back as we’ve gotten better as producers, and I think we’ve really honed in on what we as a duo want to do, but that’s more of a conversation for the future.

The Nocturnal Times: Over the next five years, what do you hope for the future of Birthdayy Partyy?

Birthdayy Partyy: Our whole goal with this project has always been to simply share music with people and help them forget about their problems for a few hours.

We’ve been blessed to play festivals and venues from coast to coast across the US, and we can’t wait to get back to touring more actively, and hopefully hit a lot more festivals in 2022 and beyond. When we get to headline in different clubs though, what we’d really like to start doing is more extended sets. It is so hard to get a proper vibe going when you have as little as 45 minutes sometimes. 2 hours, 2 ½ hours, that gives us the proper amount of time to tell our whole story across genres, tempos, and energy levels that I think listeners deserve.

There’s already a ton of music ready to go. At the moment, there’s around 40 songs in the vault that are anywhere from “near playable” to “completely finished”, so we could put out a new song every 2 weeks for over a year and a half with just what we have right now.. That said, we’re constantly starting new music and refreshing old ideas that got thrown by the wayside, so some of these may never even see the light of day outside our live sets.

I guess that’s a long way to say its going to be essentially a more refined version of the past 5 years, but with more consistency, better music, more shows, and MORE PARTYY.