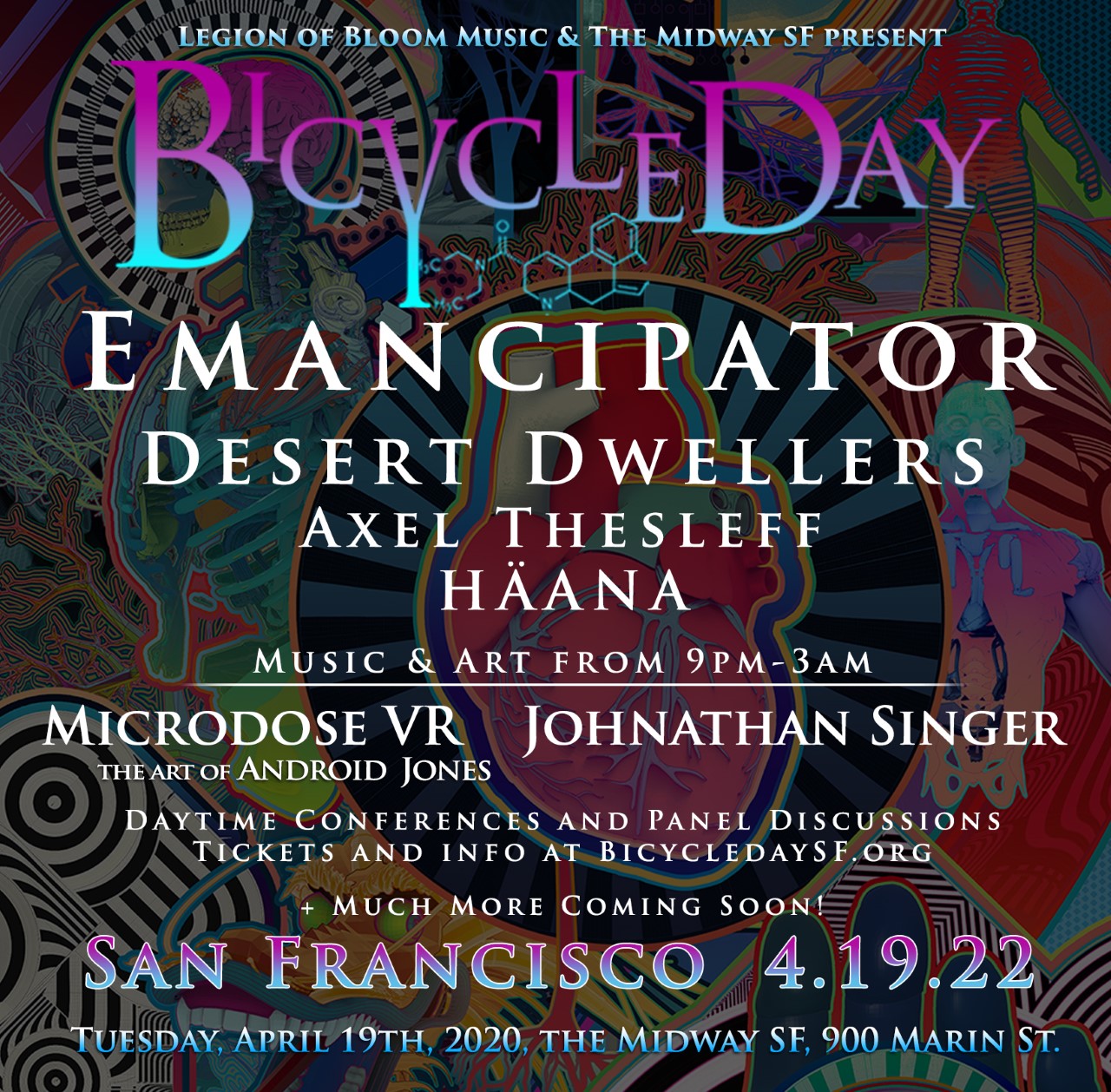 For nearly a decade, Bicycle Day SF has fostered community and connection in the San Francisco and greater Bay Area with their unique annual art & music festival. For those willing to attend this event, Bicycle Day SF will take place on Tuesday, April 19th at theMidway. In celebration of the “Good Doctor,” Albert Hofmann, his invention of LSD and his infamous bike ride home after intentionally ingesting the substance – Bicycle Day SF was born. Following a two year pause of public celebration, Bicycle Day SF will return bigger and better than ever before.  For the first time, Bicycle Day SF will include daytime programming with keynote panel discussions with leading experts in the field of psychedelia in addition to a night of music and art festivities.

“We are so thrilled to bring back the revered and uniquely Bay Area annual celebration of Bicycle Day for the first time since 2019. Similar to years past, the party will include all things psychedelia, however for the first time we are including a daytime programming of conferences and panel discussions with some legendary figures in the psychedelic community. This includes touching on topics such as decriminalization, therapeutics, research, arts and culture.” – Josh Pollack

The first ever daytime programming will include a sneak peek of filmmaker Seth Ferranti’s latest documentary, “Psychedelic Revolution: The Secret History of the LSD Trade” followed by an interactive panel of leading experts in the fields of activism, research, the arts, and decriminalization. This event is the first of its kind, spanning and combining the most vital topic areas in psychedelics today. The speaker panel will discuss the current state of psychedelics with key topics ranging from the legalization of LSD, psychedelic research, medicinal benefits of psychedelics and more. Speakers will include medicinal chemist and creator and director of Vice’s Hamilton’s Pharmacopeia Hamilton Morris, Leonard Pickard, Isaac Abrams, Rhoney Stanley, Timothy Tyler, Seth Ferranti, Mark McCloud, Mountain Girl, Ryan Jay Beauregard, and Madison Margolin.

And similar to past years, Bicycle Day SF will host an evening of extravaganza celebrating art and music with Microdose VR and Johnathan Singer. Consciousness evoking musical artists set to perform include headlining DJ/Producer Emancipator, in addition to Desert Dwellers, Axel Thesleff and Häana.

Limited VIP & GA tickets for the daytime & evening programming are on sale now while supplies last.

What is Bicycle Day

At Bicycle Day SF, we seek to amplify that signal and broadcast that vibration, honoring the Good Doctor and all of those who followed in his footsteps, as well as push the envelope with new technologies that seek to entertain, inspire and evoke conscious evolution. Psychedelic Culture has been called the family of light, and those that get it, understand. The idea of union and a collective good is a core principle in the psychedelic experience. A feeling of connection, good vibes, and deeper understanding is part of the trip. We embrace that and once again we celebrate the Good Doctor, Albert Hofmann and the bicycle ride that changed the world.

Related Topics:Bicycle Day SF
Up Next