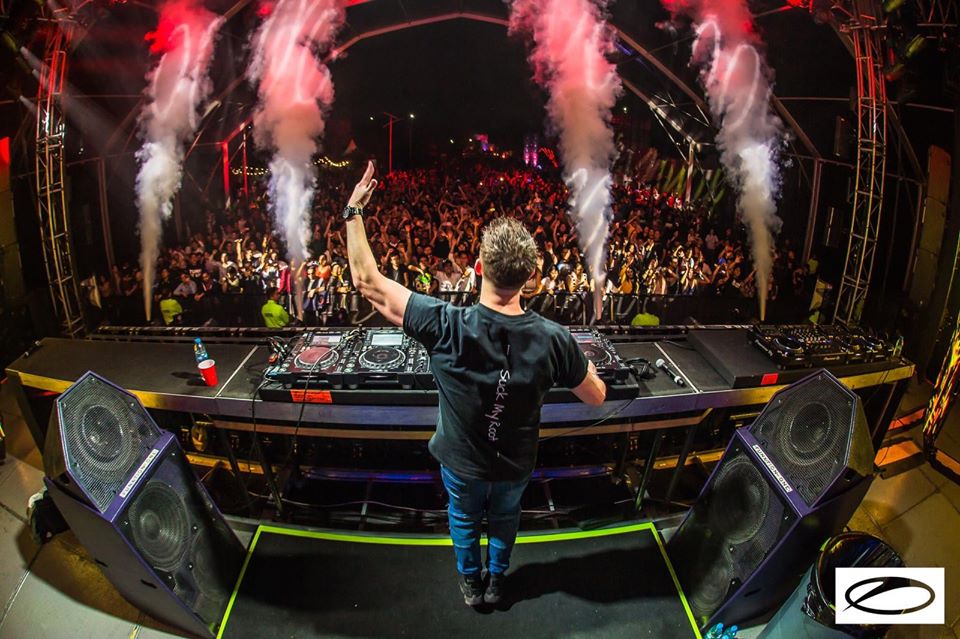 Compositional wizard and Garuda label boss Ashley Wallbridge has been responsible for a wealth of floor-combusting numbers. The trance mainstay has been in the game for years, perfecting his craft and creating heaps of melodic genius for our listening pleasure. Highly-respected and widely cherished for not only his distinguished tunes but his infectious and hilarious personality, Ashley cements himself as one of a kind.

A truly lovable character and genuinely fun person to be around, he spreads cheer and laughter in ways you have never seen before. Translating this charismatic energy into his equally contagious sound, the result is that of pure audio genius. Across his career we’ve heard countless lovable works that develop one after the next with more and more skill and magnificence.

Earlier this year he released his full-length album beside longtime friend, collaborator, and Garuda co-owner Gareth Emery titled Kingdom United. The album rings in at one of our favorites of the year, chock-full of heart-warming trance melodies, upbeat dance floor beats, and relatable lyrics. Based off of their mutual love and pride for their home country of the U.K., Kingdom United features both tracks and accompanying music videos that honor the beloved ‘united’ Kingdom. Other recent works include originals and reworks like “End of Time,” “Diamonds,” and “On The Move,” as well as several remix albums for “Vesper” beside Gareth Emery and Nash, and “Surrender” beside Darude and Foux.

Although 2019 has encompassed a multitude of new releases and successful accomplishments, this year hasn’t been all sunshine and flowers for the British producer. This Summer he faced a very serious hospitalization from meningitis, leaving him fighting the infection in the hopes of a speedy recovery. The trance scene and beyond came together in wishing him well, and thankfully he has come out on top, stronger than before.

During this year’s edition of the annual Amsterdam Dance Event, we caught up with Ashley at Armada Music HQ during Armin and Ruben’s Thursday A State Of Trance marathon. The top names in trance got together inside the famous starch-white ASOT studio with other dance music professionals and even a number of lucky fans for a celebration of everyone’s accomplishments. Our interview below uncovers some of Ashley’s recent noteworthy happenings amidst a few laughs recalling stories of good times. With much more on the Wallbridge and Garuda horizons, the next chapter looks as promising as ever.

Nocturnal Times: Tell us about what you’ve been up to so far in Amsterdam and what you have planned for the week?

Ashley: In a nutshell, I got here yesterday, I was drunk. Then I played at nighttime and I was more drunk, now I’m going to ASOT and I’m drunk! But it’s been good, it’s been busy – nonstop.

Nocturnal Times: When was your last time here at Armada and the ASOT studio?

Ashley: For the album when me and Gaz (Gareth Emery) dropped the album we came to the ASOT studio and did an interview with Armin and it was really good! It only seems like yesterday we were here.

Nocturnal Times: Last night you played Orjan Nilsen’s party – how was it?

Nocturnal Times: Earlier this year you released Kingdom United with Gareth. How has it been since the release and how have fans been reacting to it?

Ashley: I mean the album took so long – it took three years to do. We were really scared like “oh, people might not like this, might not like that,” but everyone loves it. Working from L.A. for Gareth and England for me, it’s been really hard. Doing it online, and I don’t get up early anyway! I get up at like one in the afternoon, so trying to work with Gareth is fucking impossible! So when we were together, it was very good. Getting it out to the public for the first time, seeing the reaction is great. I think it’s at 15 million streams now which is amazing!

Nocturnal Times: Did you have any particular vision when you decided to make the album together, or was it more you two wanting to make music together and then the album came from it?

Ashley: It started because Gaz had a few tracks, I had a few tracks, and then we were on the phone talking about Garuda and all that, and then he said he had a load of new music. And I said I had a load of new music, so you put them together and he said “I’ve got a crazy idea. How about we do a joint album?” And I was like “fucking yes – let’s do it!” And then we did the album, we had like thirty tracks, and went down, down, to about 13 or 14 tracks, but we still didn’t have a name for the album. It took us four months to figure it out! Four months to find that simple thing? I mean how easy!

Nocturnal Times: So then what about ‘Kingdom United’ struck you both as the winner after such a long search?

Ashley: I think it’s just because we’re both really passionate about where we’re born. Not a lot of people know, but Gareth and I are born in the same town, Southampton, at the bottom of the U.K., and we lived next to each other! Like within two miles, not knowing. When I started I was a massive fan of Gaz – so I’m watching Gaz and I’m like “fuck yeah, it’s Gareth Emery, wow!” and then we communicated and became friends and it’s been a pretty crazy ride.

Nocturnal Times: With such a great friendship and even several music videos together on the album, are there any particularly fun or crazy memories that come to mind?

Ashley: So this track we have together we called “Mansion,” which we named after a place which Gareth had rented in Miami during Miami Music Week. That was probably the craziest three days of my life…like couldn’t remember what I was doing. Threw a barbeque for people I didn’t know, and I think that was bonding between me and Gareth. I think that time was 2010 or 2011, and that was it!

Nocturnal Times: Looking at what’s next, what do you have coming music wise?

Ashley: So I’ve got a load of new music coming. I’m working on a new album myself, but it’s going to be a long way away. New stuff on Garuda, I’ve got a new track coming out in a month which is a big track. Lot’s of touring, music, getting drunk!

Nocturnal Times: Earlier you mentioned your Asia tour – tell us about that!

Ashley: Yeah – it starts off in the Philippines on Halloween, then we just hit some nice places in Asia – China, Japan! It’ll be very good.

Nocturnal Times: Are there any cities you love returning to the most?

Nocturnal Times: Are there any countries you’d like to see your music blow up in?

Ashley: I’d love to see China. It’s okay in Asia but it’s such a massive place, if the music went absolutely huge there, it’s like another career. So I think that!

Nocturnal Times: Lastly we want to ask about music videos, because you’ve got some very cool concepts going already, for example “CVNT5” with Gareth, or the “Kingdom United” music video with fans submitting clips. Is there any video concept you’d like to bring to life but haven’t implemented yet, or are you not so much involved with the direction side of things?

Ashley: Yeah exactly, I don’t think too much of any of that, I just leave it to other people. For me I just do the music, and then the producer will run something by me and if I like it then yeah, go for it, and that’s it really!