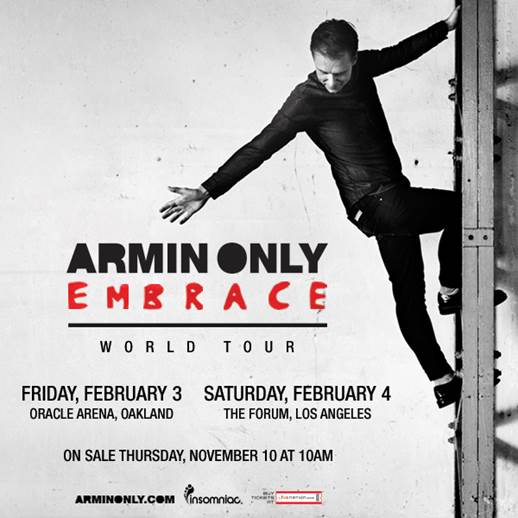 Teaming up for two colossal California shows, Armin van Buuren and Insomniac have just revealed the first and only North American dates for the Armin Only EMBRACE world tour!

Coming early in 2017, so far tour dates include Friday, February 3rd at Oracle Arena in Oakland and Saturday, February 4th at The Forum in Los Angeles. Armin van Buuren has scheduled the ticket on sale for both events this Thursday, November 10th at 10am PT just in time for his weekly A State Of Trance radio show broadcast!

The Armin Only world tour makes a grand return to the U.S. after the success of Armin van Buuren’s sixth artist album titled ‘Embrace.’ Trance fans have witnessed a similar tour, after the release of Armin’s album, ‘Intense’ in 2013. Just like the massive Armin Only world tours of the past, we can expect an extended live set accompanied by an immersive, state of the art production and a plethora of live performers including singers, dancers and maybe even a rock band. Betsy Larkin, Mr. Probz, Kensington, Angel Taylor, Eric Vloeimans and Cimo Fränkel are all possible performers joining in on events along the tour.

The arrival of the highly anticipated Armin Only Embrace world tour in the US reminds us of the extensive reach of his previous ‘Intense’ tour which united 500,000 attendees at nearly 40 events spanning 5 continents. Armin van Buuren has said this will be his biggest tour to date and we believe the record breaking shows will highlight the next year in dance music!