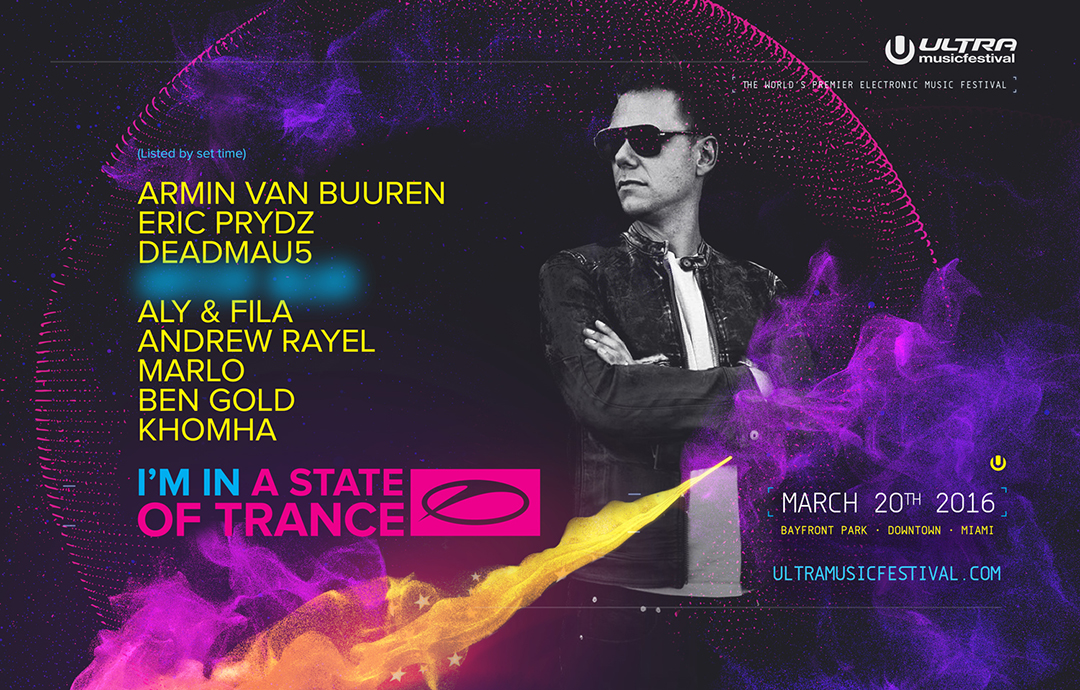 The 2016 festival season is set to make a significant start in Miami next month. Ultra Music Festival has just announced their sensational phase 2 artist lineup and stage appearances by day. For the sixth year consecutively, the world’s premier music festival and Armin van Buuren have joined forces for a history-making phenomenon.

A State of Trance 750 cements it’s epic legacy with fifteen years of providing the best and latest trance hits, reaching millions of fans every week. The globally recognized celebration founded by Armin van Buuren triumphantly exudes Megastructure status. On Sunday, March 20th, Ultra will dedicate its closing day to Armin, the colossal surprise guests and to trance fans for “I’m In a State of Trance.”

Reserved for ASOT, and set to precede Armin are two members of dance music royalty, Deadmau5 and Eric Prydz. Returning from last year and a legend in his own right, Eric Prydz will once again grace the Megastructure with his signature sounds. Speaking of returns, Deadmau5 will be making his long awaited trip back to Ultra as well as a mind-blowing ASOT debut.

While the news of this groundbreaking occurrence sweeps through the dance music scene, the talent roster doesn’t end there. Along with Armin van Buuren, Eric Prydz and Deadmau5 comes a swarm of heavy hitters. Joining Armin on his quest to turn the world into one massive dance floor; Aly & Fila, Markus Schulz, Andrew Rayel, Marlo, Ben Gold, Khoma and an undisclosed act will trounce the Megastructure for ASOT 750.

Only a limited amount of VIP tickets remain for Ultra Music Festival. Fans can also tune in to astateoftrance.com on Sunday, March 20th as the entire event will be streamed exclusively by Armin van Buuren to worldwide listeners! Will you be in A State of Trance with us?