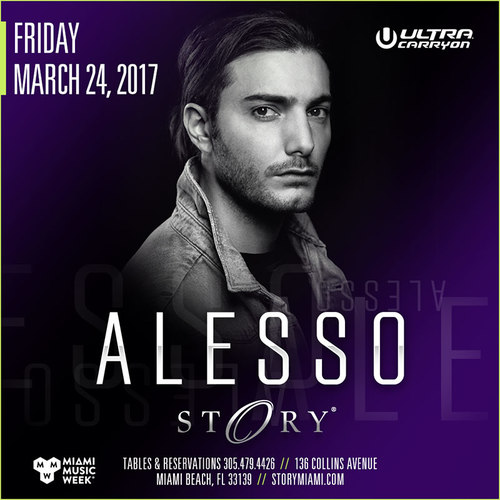 Commencing directly after the first night of Ultra Music Festival, have no fear house fans, one of the most sought after talents in dance music will perform at Miami’s elite nightlife hotspot. Story Miami, located on Collins Avenue is hosting an Ultra afterparty for the ages. Alesso is ready to tear the roof up at Story on Friday March 24th for a Miami Music Week massive.

With the enormous success of his recent artist album Forever, which debuted as the #1 electronic album on iTunes, Alesso has since closed out 2016 on a high note. He recently released “Take My Breath Away” and continued to tour while still creating unique music. Next up for the platinum producer is a deeply passionate new club track titled “Falling.” Fans can get a sneak peek of the song by Alesso ahead of its full release, Friday, February 3rd (watch below):

Aside from his headline performance at Ultra Music Festival, selling out in record fashion, this will be your only chance to let Alesso take your breath away in Miami. Don’t wait on securing your plans for Miami Music week and get your tickets HERE.

We hope to see you on the dance floor this March!