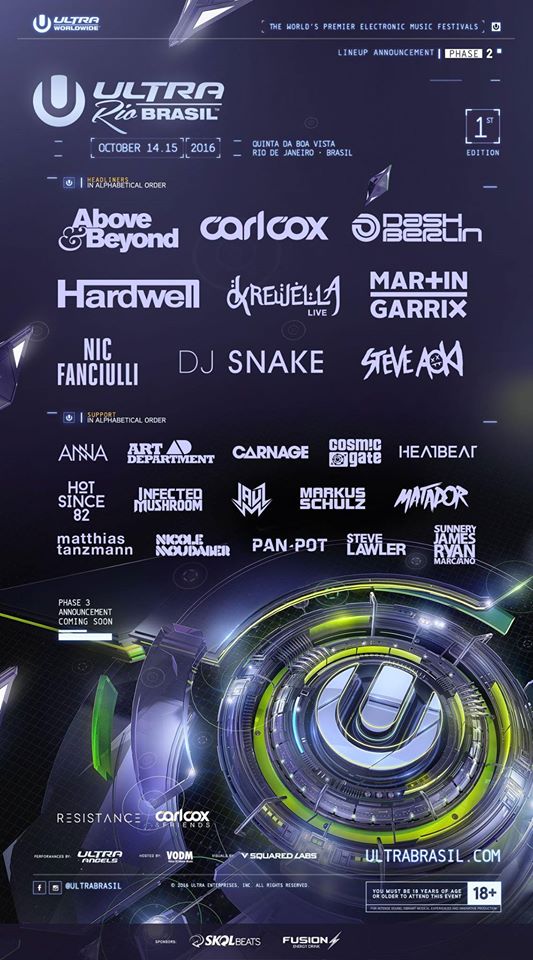 Following this summer’s spectacle of the 2016 Olympics in the vibrant South American country of Brazil, Ultra Brasil will be the second grandiose event to leave its mark in this cultured region of the world. This will be Ultra’s first time crossing such borders, bringing you the inaugural Ultra Brasil to the seaside town of Rio de Janiero. The event will span two days in mid-October on Friday the 14th and Saturday the 15th. The Latin America festivity will be the final closing celebration of the year-long campaign held by Ultra Worldwide in 2016.

What started as the simple mainstay festival in Miami, and grew into one of the most notorious festivals held in the entire world, it has now flowed into an international brand that hosts events in multiples countries spanning across the entire planet. This year alone Ultra Worldwide has hosted 21 events on five different continents, capping it off with this latest celebration at this year’s first-ever Ultra Brasil.

The official phase two lineup brings dance music’s biggest names to the tropical climate of Brazil after an already jammed packed initial lineup. Highlights of the phase two lineup of Ultra Brasil include Above & Beyond, Steve Aoki, Nicole Moudaber, Markus Schulz, and Cosmic Gate. These stunning acts will be joining the likes of Hardwell, Martin Garrix, and Jauz whom were announced on the first bill for the premiere of Ultra Brasil 2016.

The Resistance Stage will be playing a vital role in this year’s Ultra Brasil and their lineup too was expanded heavily with the recent phase two announcement. Carl Cox, Hot Since 82, and Matador were already set up to take over this year’s elite techno stage in Brazil. With the addition of techno acts such as Nic Fanciulli, Art Department, and Pan-Pot, the Resistance Stage at Ultra Brasil may be one of the best yet to come across the southern half of the hemisphere.

The sounds of Ultra Brasil isn’t limited to just techno, as there will be a wide variety of acts featured at this year’s celebration with the new phase two announcement. The psytrance hard beats of Infected Mushroom and a live-performance by the rejuvenated duo of Krewella will be making rare appearances at the historical Quinta da Boa Vista Park. Don’t miss out on the opportunity to finish off the festival right, in one of the most celebrated destinations of the year in Rio de Janiero, Brazil.

A small portion of tickets are still available for the premier event of Ultra Brasil for a mere $260 American dollars. If you are a resident of Brazil you might be applicable for the the insider discount of only $130 USD. Two-day passes are available in the third tier as well as VIP packages and one-day passes.

For more information on tickets and pricing options go HERE.