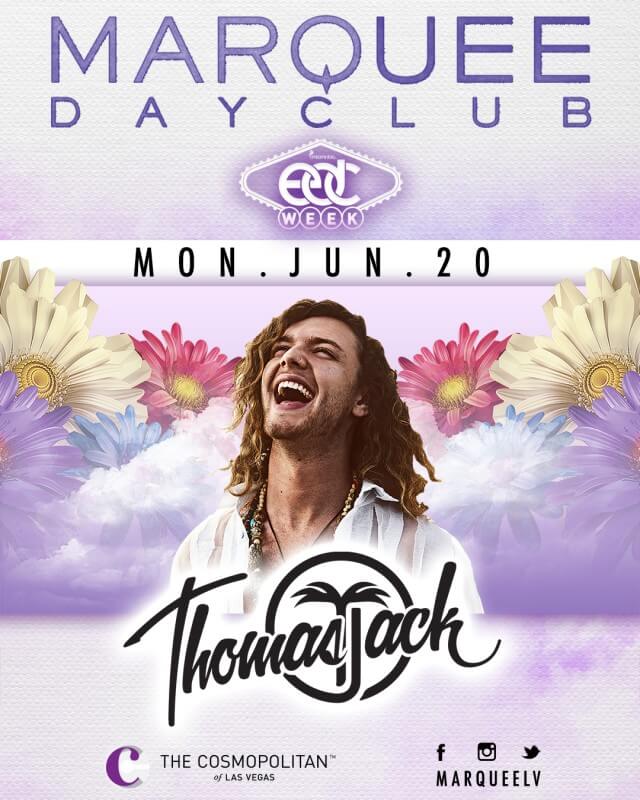 Thomas Jack returns to Marquee Dayclub at The Cosmopolitan of Las Vegas on Monday, June 20th to close out EDC Week 2016

Closing out the biggest week in the music world, Australian DJ Thomas Jack, brings his laid-back sounds of tropical house to Las Vegas. As Electric Daisy Carnival and EDC week come to an end catch one last pool party to satisfy the electric buzz. Marquee Las Vegas Dayclub is hosting an array of artists throughout EDC week saving the best for the last day. On Monday June 20th, 2016 the well-known instrumental and vocal sounds Thomas Jack incorporates into his groovy beats will provide an ideal setting for the last day party of EDC week.

Being the first to term “tropical house”, Thomas Jack has been perfecting his sounds bringing us the smooth flowing rhythms of live instruments he features in his productions. With well-known original tracks such as “Sympathy”, “The Final Speech” and most recent single “Rivers” as well as other mixes of top artists Of Monsters & Men and One Republic his style will appeal to all pool party attendees. Make sure to end the week right and don’t miss Marquee’s last day banger of the week long festivities.

Tickets for Thomas Jack at Marquee Dayclub can be purchased HERE.

The Killers at Borgata Event Center in Atlantic City, NJ on July 22