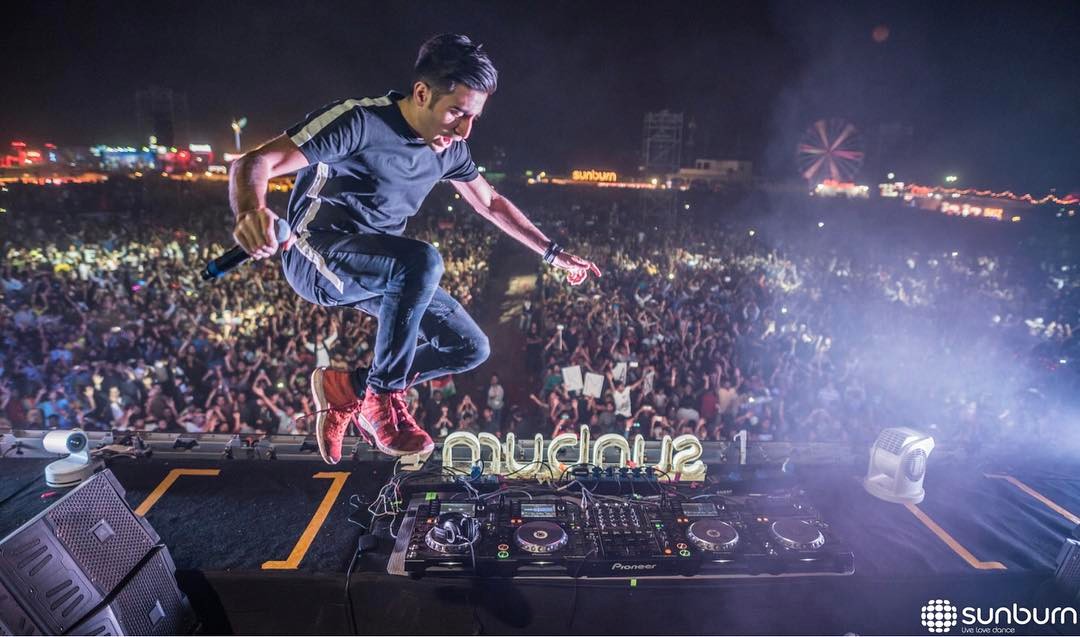 With a massive following in India, Shaan was the first Indian talent to play Tomorrowland, the world’s most iconic music festival. Rewind to 2014, producer and DJ, Shaan Singh, was the first Indian to perform at the Boom, Belgium music fest, which draws hundreds of thousands attendees each year. Now, Shaan is playing main stages with some of the biggest names in dance music, like Hardwell, KSHMR, and W&W.

India’s most famed and followed DJ, Shaan has been a part of the electronic dance music (EDM) circuit since he was 15 years old. Since 2010 he’s been playing gigs across the world, including Tomorrowland, Sunburn Festival, and Djakarta Warehouse Project, among others. Following releases on Armada Music, “Break Your Ways” and “Hooya” with Sandro Silva, as well “Fire” on Armada Captivating, and “Let Love Go” feat. Hellen on Armada Trice, and “Light Up The World” on Statement! Recordings. Over the course of his seven-year career, Shaan has earned the support of acts such as Tiësto, The Chainsmokers, Dimitri Vegas & Like Mike, Tritonal, Ruben De Ronde, Sick Individuals, Blasterjaxx, Ummet Ozcan, Thomas Gold, Chuckie, Cash Cash, Breathe Carolina, Borgeous, Nicky Romero, Heatbeat, and more.

Once we had the opportunity to catch up with Shaan earlier this week, we learned all about how he first got his start exploring electronic music, his most recent releases, and his most celebrated performances. Fresh off a massive gig with KSHMR and Jai Wolf, Shaan will be partaking in Guestlist4Good’s World’s Largest Guestlist party from Dec. 1-3, where he will play alongside Hardwell and many others. Shaan has also revealed exclusively to The Nocturnal Times, that he will premiere his brand new single, “End Of The World” feat. Allan Eshuijs, at the Guestlist4Good main stage on Dec. 2, following its release on Dec. 1 via Armada Zouk.

The Nocturnal Times: How and when did you first begin exploring dance music? Who were some of your first influences and who do you find inspires you most now?
Shaan: My first real exposure to dance music started when I was around 13-14, yep I know it was pretty early but to be honest I was one of those kids that didn’t have many friends and loved to explore the most random stuff. I started DJ’ing when I was 15, rented some CDJs with money out of my pocket for 2 days and got a Bollywood DJ to teach me the basics. I honestly had my first show at the end of 2010 playing at the bar at Sunburn festival to, well, only my family and my grand mom! Back then my biggest influence was Armin and I don’t think that’s changed to date, the way he re-invents and still sticks to his sound and vibe is pure genius. But yea, as I said, from 2010 to 2014 – when my first main stage gig was – was a hell of a ride. Lots of empty clubs, house parties and whatnot, but in 2014 when I finally got my first main stage slot, after starting from the bottom in the same festival, it felt incredible.

The Nocturnal Times: You’ve acquired a huge following in India. What does your presence in India mean to you and when can we expect you here in the USA?
Shaan: My fans in India are the fans that made me who I am so I’m grateful to them for everything I have now, the amount of love and appreciation they give me is incredible, we had around 10,000 people sign up for my birthday show even though only 200 would get invited! I’m really looking forward to coming to the USA soon my fan base has been growing bigger and bigger there which is great to see!

The Nocturnal Times: Guestlist4Good is throwing the world’s largest guestlist party from Dec. 1-3. Hoping to break the Guinness World Record for largest guest list event ever, what does playing this event mean to you?
Shaan: It’s an incredible event. Educating 100,000 underprivileged Indian children through the power of music and love. Every time I’m a part of this event I’m grateful I can join the cause and be a part of a change that will shape the future of many children. Apart from that, playing the Hardwell & Friends showcase is incredible, he’s been a big supporter of mine and apart from Armin, he’s been a great influence as well.

The Nocturnal Times: The Guestlist4Good event also brings Hardwell, W&W and more to a Mumbai stadium with a capacity of 100,000 plus. What makes this event different than events you’ve played in the past?
Shaan: Well as I mentioned before, its the love and energy from the artists and fans to create a change that makes this event so special for me. W&W and Hardwell actually both have supported my music heavily so it’s amazing to be a part of this life-changing event alongside them.

The Nocturnal Times: You recently opened for KSHMR and Jai Wolf in Mumbai, with a massive stage setup. How was this experience for you?
Shaan: It’s always incredible to play in my home town of Mumbai and even better when I support acts like KSHMR and Jai Wolf. KSHMR’s a great musical inspiration to many artists and he’s a really sweet guy too so it’s even more incredible to share the same stage!

The Nocturnal Times: In March 2017, you released your official remix of Steve Aoki & Louis Tomlinson’s “Just Hold On” which reached 750,000 plays on Spotify (and this is without India having access to Spotify!) What did this remix mean to you and what was it like seeing Steve Aoki perform during Miami Music Week this year?
Shaan: Yea and it’s still growing! It was an incredible opportunity to remix that song and for me it was a big break into the U.S market! I surprisingly met so many U.S based fans during Miami Music Week, and this remix just made it more incredible. Oh and yes 750,000 without India, that means a lot to me because it means my fan base is growing and I honestly can’t wait to come to the U.S for a tour soon!

The Nocturnal Times: So, word on the street is that you’re a great soccer player. How did you first start playing soccer, what’s your favorite team, and what’s one of your fondest soccer memories?
Shaan: Ahhhh, haha! Well I started playing soccer much before I was even a DJ and it’s actually a big passion of mine apart from music. I’m one of those Die hard Manchester United supporters. The fondest memory would actually be pretty recent, I’m playing a league in my home town and our team was last with 0 points, within 6 games without a loss and incredible scoring rate we’ve gone up to 4th with 3 points of the top of the league – haha!

The Nocturnal Times: Is there anything you can share with your fans and The Nocturnal Times readers about upcoming projects or track releases?
Shaan: Yes, finally I actually can! I’ve been working on this project for the longest time now and it’s finally set to release on Dec 1st. My brand new single is called “End Of The World,” and I’ve gone back to my progressive house roots with high energy! The best thing ever is I get to premiere it on the Guestlist4Good main stage on Dec 2nd! Apart from this I’ve got some big releases and collabs coming soon, too!

The Nocturnal Times: What’s next for Shaan? What is the legacy you hope to leave behind with your career as a musician?
Shaan: There is so, so, so much. I’ve got some incredible rebranding coming bringing some big Indian elements into my brand and really incorporating my personality too, you’ll see ;). Well, legacy-wise music lives forever, and I’d love to leave behind some incredible music that people will love for years to come, and music that will create happy memories and moments for people all around the world. Honestly can’t wait to share my music with the U.S. very soon!