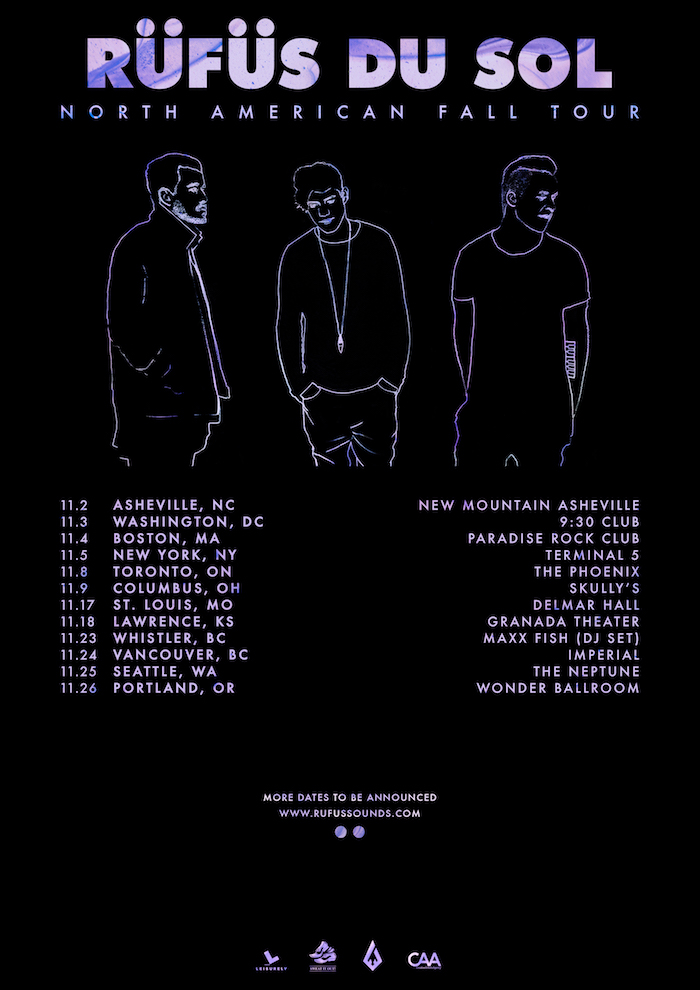 Rüfüs Du Sol has been just about everywhere this festival circuit, with performances at Coachella, Firefly, and Electric Forest. The young trio hail from one of the hottest exports of talented producers, Australia and have been making a run since 2010. Even as they close out the tail end of the festival season with stops at the inaugural Vertex Festival and Summer Set Music & Camping Festival in Wisconsin, they’re still thinking ahead.

Their latest announcement is a first phase release of North American tour stops, including twelve different destinations. The group will be cranking these dates all out within the month of November. They’ll be bouncing around in prominent venues such as Terminal 5 in New York City and The Neptune Theatre in Portland, Oregon. More tour dates can be expected as this was solely a phase one tour date announcement.

To celebrate their tour announcement, Rüfüs Du Sol has released a remix pack to their track “Be With You,” the single from their second album Bloom. The remix pack is live across Spotify for streaming use and various platforms for purchase such as iTunes, Amazon Prime, and Google Play. Rüfüs Du Sol enlisted the help of Booka Shade, Friends Within, Stereogamous, and Sondrio to each give their spin on the Bloom classic. Stereogamous put together a listen-worthy remake, as they put a perfectly hip electro touch on the Rüfüs Du Sol original. If you didn’t get a chance to see Rüfüs Du Sol this summer, you must find the time to catch them live at the upcoming North American tour.