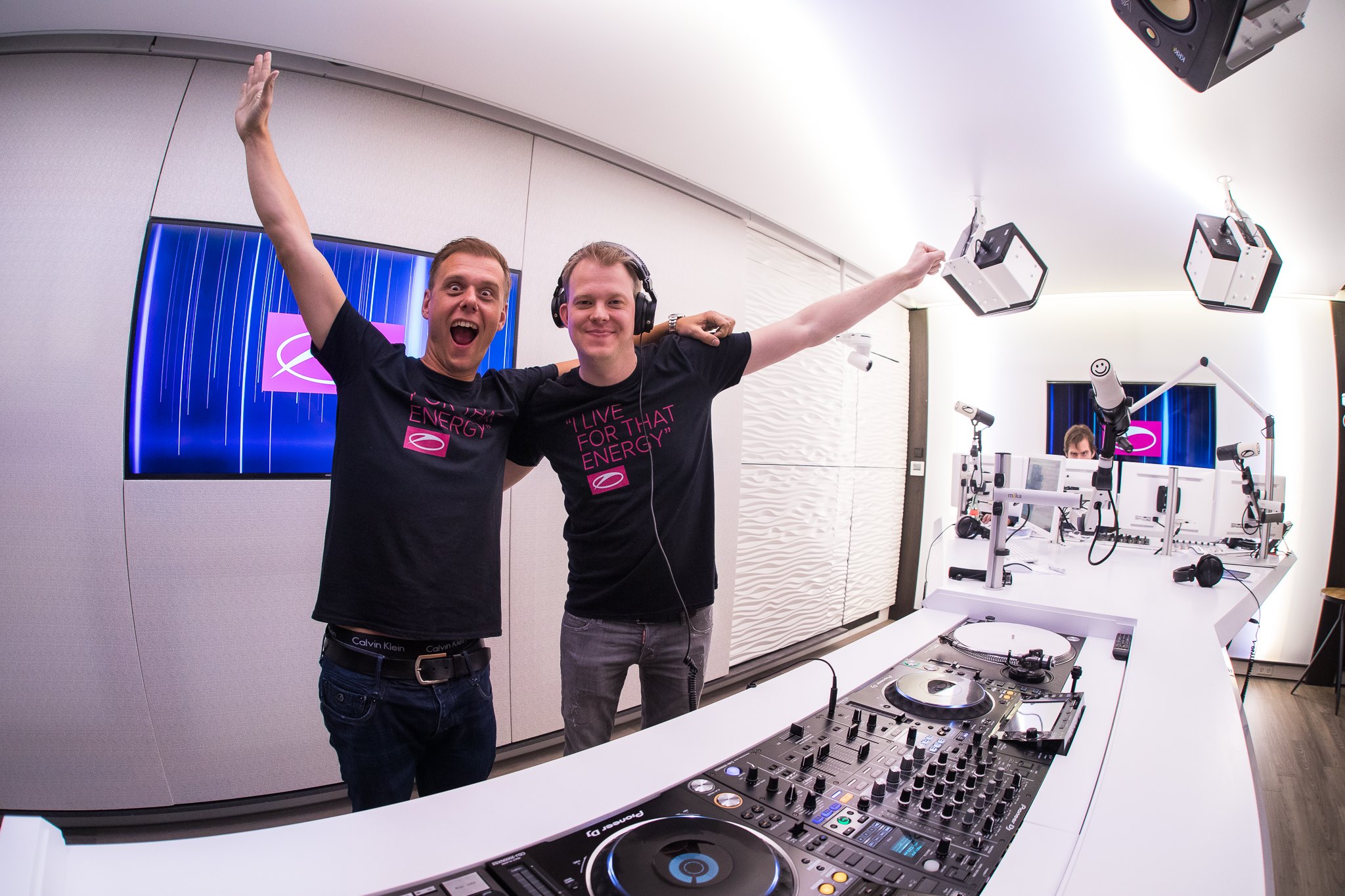 Dance music is reaching new heights, and Ruben De Ronde has been called upon by Armin van Buuren to co-host his weekly A State of Trance radio show. During electronic music’s biggest week, we sat down with Ruben to touch base on his recent endeavors, including the release of his debut studio album, My Story, and taking on co-host responsibilities alongside Armin. This summer brings

As if co-hosting one of the world’s biggest radio shows wasn’t already a feat in itself, Ruben joins Armin for every episode of ASOT which is now video live streamed across the world. All while the annual ASOT Miami festivities were taking place at the Ultra Music Festival Megastructure, we caught up with Ruben who had also just made his ASOT MIA debut. During our sit-down with Ruben, we discussed his very beginnings exploring the world of electronic music, joining Armin van Buuren as the official new co-host of his A State of Trance radio show, his debut album, My Story, and of course, what’s to come. Read the full transcribed conversation with A State of Trance’s new co-host, Ruben de Ronde, below.

The Nocturnal Times: We’re back here in Miami at Ultra Music Festival. What are some things you look forward to most when heading back to Music Week in Miami?
Ruben De Ronde: Well, similar to Tomorrowland, they both have very blended crowds. Everybody flies in from all over the world for this event and it sells out very quickly. It’s rare if you come across somebody who’s here by accident. At Ultra, you either come across locals or those who planned this months in advance—they fly here, book hotels, etc. Everybody knows the music here, so that’s another thing that makes Ultra special.

The Nocturnal Times: You’ve sort of become an A State of Trance staple yourself now. What can you tell us about your ASOT Miami experiences over the years? How has the annual return of ASOT MIA evolved?
Ruben De Ronde: I think the very first time we were here, I didn’t really have as big of a role in A State of Trance as I do now. Over the last few years I’ve taken on a bigger role. As of a few months ago, I’ve even become the co-host of ASOT now every week. It keeps getting bigger and bigger! This is actually the first time that I’ve played at the ASOT Miami event at Ultra, which is another big step for me and I can cross off my bucket list.

The Nocturnal Times: How was your ASOT Miami debut?
Ruben De Ronde: Well, I mean I wish I could say it was booming the whole time, but I opened the Megastructure (laughs)—and by the time people started making their way over my set had already begun. But I will tell you, the energy was still great. And I also have to say, once I came back to the trailer—even at the beginning of my set when while the crowd was making their way inside Bayfront Park—there were so many people tuning in from across the world. We were trending worldwide on Twitter; it’s like two different worlds.

The Nocturnal Times: You’re co-hosting ASOT now with Armin van Buuren every week. What can you share with us about your co-hosting duties alongside the king of trance since starting the new ASOT Live stream every Thursday?
Ruben De Ronde: It has been interesting because I didn’t really see Armin all that much before, but we really need to be doing this together every single week—no exceptions. So, it’s different as well as my role being more integral with the show itself. It’s interesting, it’s a lot of fun!

The Nocturnal Times: Tell us a little bit about your debut album, My Story. How did it come together and how long did it take to complete?
Ruben De Ronde: From start-to-finish, I’d say it took about three years to complete. In the meanwhile, I also had a computer crash so I lost a lot of files in the process. I have to re-create certain tunes, re-record tons of vocals, but I’m really happy about how the end result turned out. Now there’s a new album coming out together with David Gravell, Together, which is 16 brand new tracks. The first singles came out already, but it sees its official release in June.

The Nocturnal Times: Taking your hard-drive crash into consideration, which of the tracks on My Story are the most personal for you?
Ruben De Ronde: I think one of the tracks from the album that means a lot to me is “All In” with Kimberly Hale. It’s such a deep track, the vocals are quite deep. “All In” is one of those tunes that is really close to my heart. I actually met Kimberly a few weeks ago for the first time and she’s a really, really cool person. “All In” is definitely one of the tunes I like most.

Stream My Story on Spotify:

The Nocturnal Times: We’ve been listening to “Moment Of Truth”—also featuring vocals from Kimberly Hale—a lot lately. How did this one come together with Kimberly and LTN?
Ruben De Ronde: Yes, the same thing in this case! I was working with LTN for months on tunes and he came with this pitch. Then we both took different routes: I made a clubby version at 128 BPM and LTN went to 118 BPM for a deeper version. So what we did was we took the start and then both went two separate ways, which is how the track actually came about.

The Nocturnal Times: Which of the tracks on the album took the longest to create? Do you sometimes start on a track and then go back to it at a later time or completely neglect a work in progress once near completion?
Ruben De Ronde: Actually, a track that didn’t make the album—because I couldn’t finish it—is one that I’ve just finished recently with Proff. I’m going to put that one on the next album. That tune, from start to finish, after sending her the first demo, I got the vocals back and it took me about four years. After about 100 different versions, at a certain point I gave up. I had this whole guitar part in the track and started working with Proff—and now it’s finally finished. I just got the remix in from Bryan Kearney and John O’Callaghan, which is really special. I’ve been playing that for a while, but now it’s finally going to be released, which is very cool.

The Nocturnal Times: What would you say are some of your dream artist collaborations? Vocal collaborations?
Ruben De Ronde: Hmm… vocal, that’s an easy question because there’s a Norwegian singer, Maria Mena. She’s actually the only single artist that I’ve bought a ticket for in the last couple of years, she’s just special. I highly suggest you check her out!

The Nocturnal Times: How about a chance to play a back-to-back set with any DJ? Have you ever played a b2b set with this guy (points to Armin van Buuren)?
Ruben De Ronde: Actually, no, never (with Armin)! Haha, that’s a good question! I’ve played b2b with Rodg before. [Since touching base with Ruben, it was announced that he will be playing a back-to-back set with Rodg at Tomorrowland 2017].

The Nocturnal Times: What do you hope for the future of A State of Trance the radio show, especially now that the show has a new co-host (you)?
Ruben De Ronde: Well, in a way, we already are living in the future now, with the start of the new ASOT live video broadcast every week. But what I hope is that we’re broadcasting video stream from tons of other platforms, including those that are already hosting our audio stream every week. It’s already starting to happen in The Netherlands. Radio 538 is going to broadcast the radio and the video on their radio and their TV channel, which I hope is going to happen to all of the stations.

The Nocturnal Times: How about your future and your short-term or long-term goals?
Ruben De Ronde: I have goals, but I don’t share them with anyone (my long term goals, that is!) One of my long-term goals though, was playing at ASOT Miami, and now I’ve done that! I also just played at Beyond Wonderland, which was an amazing experience. I’m going to be doing four more events with them this year too, so that’s something to look out for as well. Also, my new single with Rodg, “Riptide,” is out now. I’m really excited about it because Armin played it three times and Above & Beyond played it too, which I didn’t see coming. The Rodg collab is the first single from the Together album with Rodg.

Ruben joins Armin van Buuren this Memorial Day Weekend for an opening set at Echostage in Washington D.C. on Friday, May 26.

DubVision, Remix Kings At It Again: The Nocturnal Times Interview