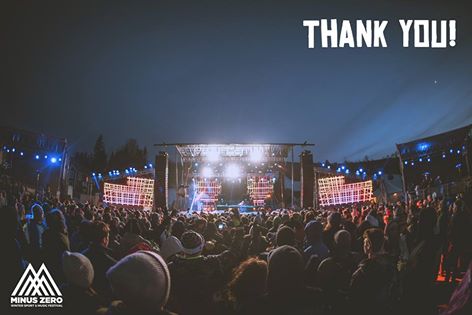 Minus Zero Festival came to Stratton Mountain, Vermont, offering a unique boutique festival experience with all the qualities of a top tier event

Minus Zero took a risk in bringing the Northeast a first-of-it’s kind, nontraditional, winter festival…and attendees reaped in the rewards. The first prominent festival to be held in New England during the lingering days of winter, Minus Zero was something unseen before in the region.

What was a mild winter for most of the country this past year, it seemed as if even the climate was playing the part for the first Minus Zero event. The sun reflected off Stratton Mountain’s ski trails which provided a picturesque backdrop behind the main stage at the base of the mountain. Festival-goers donned winter gear as the temperatures reached the sub-freezing status with each nightfall. Offering you the perfect excuse to get moving and warm up with your closest friends to some of dance music’s top producers.

For those daring enough to venture to the Summit Stage throughout the weekend you were not disappointed. Offering the best view on the mountain, the Summit Stage provided a setting you can’t find anywhere else. By taking you away from any lingering distractions, you were surrounded solely by good company, great music, and a breathtaking scenery that’s unparalleled to Minus Zero. To accompany you on your retreat of music and nature Minus Zero brought in producers, Tribe, Eitan Katz, and Sleepy + Boo. The budding producers cemented themselves in festival history as they laid down the foundation for what’s surely to be a blossoming project in the future of the Minus Zero Festival experience.

Day one had all the excitement you could imagine in a first-time festival. Fans were seen pre-gaming in the parking lot and walking in packs with eager smiles from the many lodging options available just across the street. The sense of community was strong at Minus Zero Festival as it seemed the entire village was there for the same reason, to be a part of the region’s first winter music festival. Warming up the stage early on were the likes of DUDEnGUY, Mike Chach, and Serge Deviant. It wasn’t long before the arena began to fill as the sun started to drop.

One of the first producers to really rock the stage at Minus Zero was none other than local favorite Pierce Fulton. Given the opportunity to play at his home turf, Pierce Fulton put on a heartfelt performance which made every local proud to call him one of their own. Combining his biggest hit to date “Kuaga (Lost Time)” with his home field advantage, it was a stirring moment for the artist as he was able to share his massive success in the very place that started it all. Going from a track that everyone loves, Pierce Fulton took the spotlight to play some new unreleased material he’s been working on. To no surprise the crowd reacted with enthusiasm as Pierce Fulton showcased future quality goods to be released in the upcoming year.

Gorgon City was next on the bill and brought its cool house beats to the Stratton Mountain crowd. Gorgon City blasted fans with favorites such as “Ready For Your Love” and “Here For You,” which rippled through the crowd and brought everyone to that special place bringing back old memories and surely creating new ones in the process. Gorgon City also played the undeniably jacking track by Eats Everything “Dancing (Again!)” and Kill Frenzy’s “No Panties” which set off a shuffler’s paradise. Gorgon City had opened up the party in true house fashion, giving you warm Holy Ship! vibes in the middle of winter in Vermont.

Minus Zero also played host to one of the rising stars of 2016, Attlas, a name that will surely be well known by the end of this year. With the credentials of being donned as the Deadmau5 protege, it’s safe to say the kid has some real talent. He took the crowd deeper into the tech house spectrum carefully cultivating a deliciously bleak set. With plenty of material to choose from, Attlas played tracks from his past EPs ‘Siren’ and ‘Scene’ to match the draping darkness setting on the mountain. Leading up to the final set of the night, Deadmau5 joined the stage with Attlas to close out his set. Together they played the freshly uploaded track “Bad at Titles,” a recent treasure posted by Deadmau5 via Soundcloud which has already taken the internet by storm.

Deadmau5 was the final closer of day one at Minus Zero Festival and possibly one of the most anticipated sets of the weekend. With his 2016 run of his Mau5hax tour, and string of festival performances including Ultra Miami, Minus Zero Festival cut no corners by grabbing this esteemed producer for its first-time event. Donning a fur parka and baseball cap Deadmau5 was well prepared for the late frigid set.

Playing a wide variety of culling techno and progressive tracks such as “Imaginary Friends” and the eargasmic “Avaritia,” he put on quiet the show. The spectacle of the iconic bobbing Mau5 helmet and flashing light production was a highlight of the weekend, giving the Vermont crowd an unforgettable set. He wrapped up his set with a heavily distorted play of Fatboy Slim’s “Star 69” before giving the crowd an abrupt “Thanks” and exiting the stage. He closed out his performance in true Deadmau5 fashion.

With the day one sets in the books, the crowd wasn’t done partying yet as the upstairs lodge filled in for the Minus Zero afterparty. A DJ booth had been setup prior to the end of Deadmau5’s set, and tunes were already playing for the folks ready to stay through the night. Anjunabeats tracks rang through the chalet and the bar top was full as people enjoyed themselves in the cozy winter setting.

Heading into day two fans were still feeling the arousal from day one and expectations were now high for the final day at Minus Zero Festival. Now that the fans were familiar with the setting of Stratton Mountain, they arrived early to enjoy the festivities inside the village area. A variety of bars and restaurants offered custom drinks like Vermont hot apple cider mixes, and individual DJ booths with speaker systems to keep everyone well entertained.

In the wintry environment the tropical house pioneer Thomas Jack threw down some heat. The artist quickly peeled off his jacket as he got into the groove and his signature tropical button up looked oddly befitting against the icicle laden stage. The early crowd was bobbing around as Thomas Jack played the new Claude track “The Rain Break,” Bakermats “Teach Me,” and Watermät’s “Bullit” to give you a perfect sunshine set.

Another huge name to play at the first ever Minus Zero Festival was Kaskade. An artist who’s played a crucial role in the festival scene and its rise in popularity, he had the whole crowd singing to his Galantis remix of “U & I” and his original track “We Won’t Stop.” With classics like “Disarm You” making an appearance, Kaskade also had some special surprises in store for the New England crowd. He quickly cranked up the intensity playing the BURNS track “Beauty Queen” and the AutoErotique/Hunter Siegel collab “OTF.” It wasn’t the regular house performance one might assume you’d see at a Kaskade set and it didn’t stop there. He also took the Minus Zero stage as an opportunity to release some new mellow progressive material which we can look forward to seeing later this year.

Given the duty to close out the inaugural Minus Zero Festival Jauz absolutely slayed his set. His introduction track of Guns n Roses “Welcome To The Jungle” was a fitting welcome as it prepared you for the 60 minute onslaught. Everyone was getting down quite literally as he dropped his new collab with Eptic “Get Down” and another unreleased collaboration with Ghastly that had everyone headbanging along to the beat. A minor break in the raging came when he played the 70s classic “YMCA” and everyone from the VIP deck to the crowded arena danced along in celebration of the closing set of Minus Zero.

The dance music scene has an endless amount of festivals circulating, and more popping up every year. Some large, some small, and it can be hard to stand out from the masses. However, Minus Zero Festival did just that in the second weekend of April 2016 at Stratton Mountain. Given the chance to conquer a new territory and early festival date, Minus Zero had an innovative idea and executed it with precision.

The chance to be a part of the first of anything is one you can’t pass up, and it left all the first time Minus Zero attendees more than pleased. Looking back five years from now you can say you were in attendance for the humble beginnings, in what’s surely to be a winter time stable for the Northeast in the upcoming years. Minus Zero chose the perfect location with beautiful natural scenery, brought in dance music’s biggest names, and had the ideal environment of Stratton Mountain to give you an enclosed sense of a winter wonderland community.

Stay on track with Minus Zero and don’t be one to miss out on year two in 2017 by following their Twitter, Facebook, and Instagram pages. We hope to see you join us in the next year’s wintry mix!