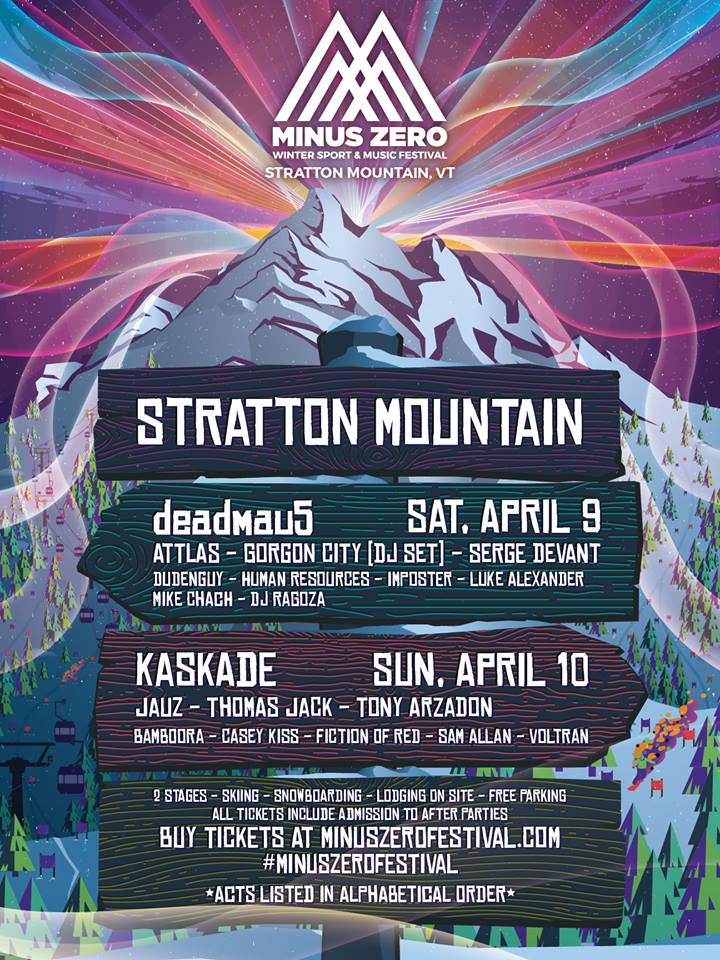 This will be one of the first major Eastern “off-season” festivals, taking place in Vermont this upcoming April 9 & 10, 2016.

Minus Zero has officially declared this year as their year with the early unveiling of three premier off-season festivals. They wound up Rocky Mountain fans with their Winter Park Resort two day festival lineup, but most recently the Stratton Mountain location revealed a rivaling lineup of their own. The mountain is located in Vermont’s Green Mountain Forest and serves as a well put together resort area that draws in crowds from the entire region during the winter months. Giving the Northeast one of best combination of resort luxuries and quality trails for a variety of winter sport enthusiasts.

The Stratton Mountain festival will take place a week after the Colorado initiation of Minus Zero 2016. The first day on Friday April 9th you have the man of the hour, Deadmau5, gracing the Northeastern US with an early festival season appearance. He’s stepping out from the shadows this year and ready to show the world what exactly he has hidden up his sleeves. Just this past week it was announced he would do a set for ASOT at Ultra Miami this year and an already foreseeable historical set with Eric Prydz B2B at Tomorrowland. The chance to see him early on will offer only the slightest foreshadow as to what sets he plays later on in the year, but it will be one of the year’s first looks at the infamous producer.

Accompanying Deadmau5 for the ride will be fan favorite Kaskade, coming off a recent hot string of show announcements as well. He will be playing on Sunday the 10th, with a well assumed late night or closing set. Other names for the 2-day festival include one of 2015’s biggest up and comers, Jauz, and the dark intimate sounds of Gorgon City. Thomas Jack will be there as well to lighten up the weather with his bongo induced Tropical fever beats.

A mountain with the necessities of quality lodging, cozy nightlife, and now the addition of the industry’s biggest artists, Minus Zero Festival will be a must for any New Englander. The tickets are only an unbelievable $99 for the Early Bird Sale that goes live this Friday February 26 at 10:00am EST; bottom line no service fees or added charges. After parties are also inclusive with a festival ticket.

Go to their site to find more information on travel, lodging, and tickets HERE.