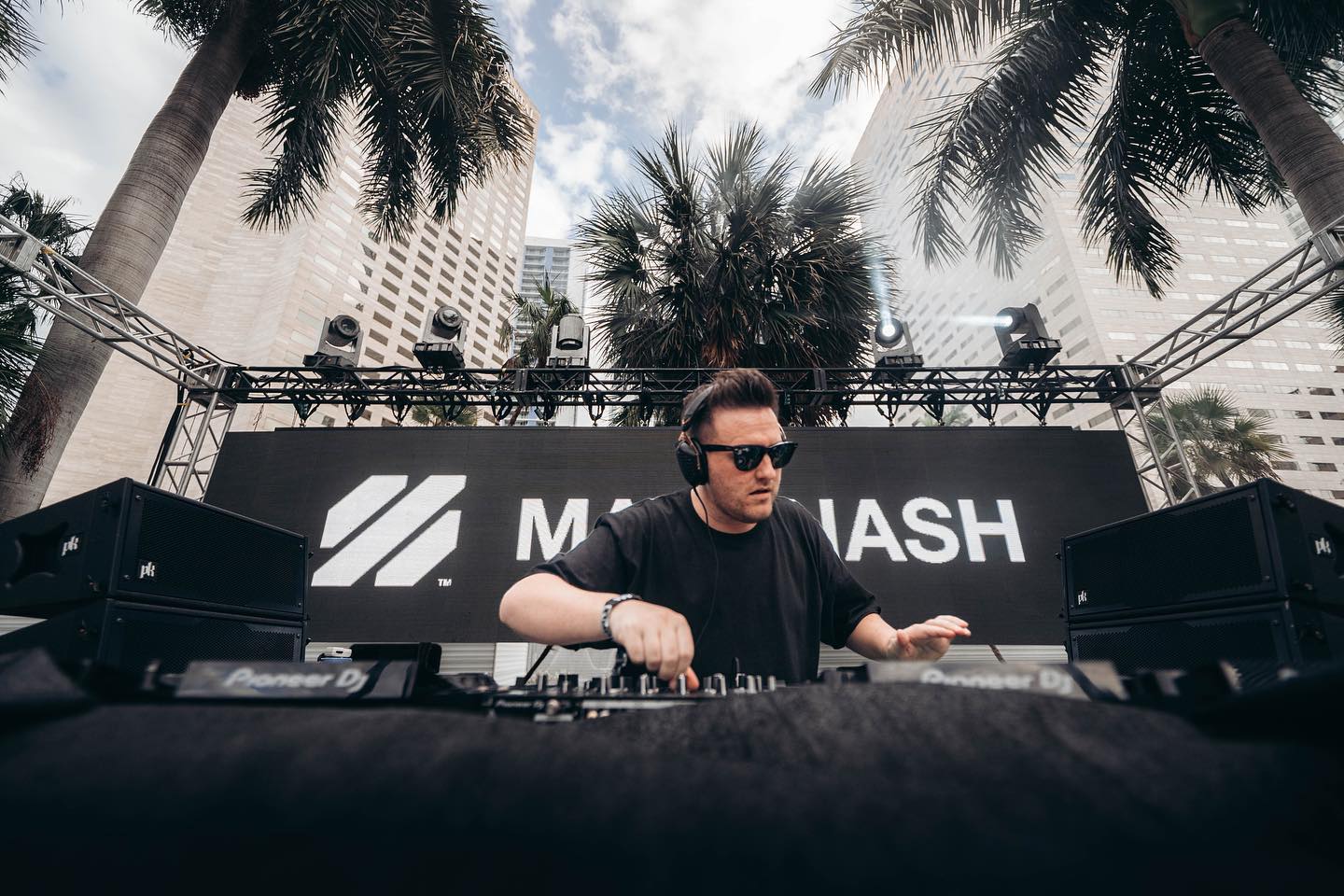 Eyes were on Matt Nash this year at Ultra Miami, as the UK DJ/Producer took his outstanding talents to both Miami Music Week and Ultra. Matt first kicked off the festivities during music week for its own parties, then brought his incredible live performance to opening night at Ultra as part of the STMPD RCRDS family.

Matt’s set on Friday was at the UMF Radio Stage which hosted its next STMPD takeover, a top highlight for those who have experienced it in years past. This year, alongside Matt the STMPD lineup featured Infuze, Osrin, Florian Picasso, KVSH X Pontifexx, Mattisse & Sadko, DubVision, Julian Jordan, Justin Mylo, and a special guest pop up by label boss Martin Garrix himself. With such a stellar lineup for the day, Matt set the tone perfectly with his high-energy and charismatic set. Per usual, the crowd was absolutely loving his performance from start to finish. Throwing down his extensive repertoire of hit songs, it was a 10/10 set yet again by Matt.

We had the chance to sit down with Matt and chat on all things Miami, Ultra, STMPD, new music and more. Read on for the full interview below.

The Nocturnal Times: Thanks for chatting with us! Welcome back to Ultra. Tell us about your week, what have you been up to so far in Miami until now?

Matt Nash: Well, we had the 1001 Tracklist livestream on Wednesday. That was really cool, it was at this penthouse on north beach. Then we’ve just been jumping around as many different parties that we could fit in and just not really sleeping.

The Nocturnal Times: Have you been to many music weeks in the past?

Matt Nash: One before and that was the same. You have the pool party and then you have the night parties so when do you sleep? And we got jet lag on top, so regardless of what time I go to sleep I get up at 5:00am.

The Nocturnal Times: You’ve got the UMF Radio STMPD stage set today – what kind of set do you have planned for the crowd?

Matt Nash: Tonight I’m excited. I’ve got a lot of new music which I’m quite excited to play. A lot of stuff that I haven’t been able to play that was made sort of over COVID and stuff. Cause we’re sort of still slowly coming back because over in Europe it was really shut down. So I’m just excited to play new music. I’ve never been to Ultra before so it’s cool to see what it’s like. It’s a great, amazing location as well. This is so cool.

The Nocturnal Times: Since time off touring, a lot of artists have dove into finding new music and crafting entirely new live sets. Is this something you did? Or are you sticking to more signature sets?

Matt Nash: Well now I’ve just gotten to the point where I’ve made so much music, the set just kind of ends up being my music, which is great, you know, cause it kind of all feels the same and like a collective of stuff. It’s given more time to make more.

The Nocturnal Times: Let’s talk about STMPD Records. How long have you been with them?

Matt Nash: I started right at the start of COVID like 2020. So I think we’re coming to the second year of working together. And before that I sort of jumped around lots of different labels, I worked with like 25 different ones and we just have a really good energy together. They let me be as creative as I want, so if I’m like, I really wanna put out this track, there’s not like, oh, well that doesn’t work or something. It’s cool. Or if I’m like oh I want to use this artwork and, or other times I want to put my dog on the artwork…they say cool go for it. They’re definitely a gem in that sense.

The Nocturnal Times: What would you say to fellow artists who aren’t feeling so at home with their music labels?

Matt Nash: I think just jump to the next one. And there’s a lot to choose from. I speak to a lot of upcoming guys and they always sort of want some advice on where to go, but I think that if you just try it out, see how it works with one place, and don’t be afraid to commit to doing a bunch of them. A lot of these guys are more incentivized if they have six releases from you, you know? And it makes it a lot easier as well. They’re more invested in you and then they’ll put you on stages at festivals and stuff like that. Just look for the right people and when it clicks, it clicks.

The Nocturnal Times: Do you have any upcoming collaborations with fellow STMPD artists?

Matt Nash: No, I kind of like to work by myself most of the time. Generally I prefer it that way. But you never know what will happen, I’m meeting a lot of them for the first time today. Might meet some people and see where it goes.

The Nocturnal Times: What new music is in the works for you and which songs would you like to talk about in particular?

Matt Nash: I just had a release called “Into The Light” which is sort of the first track since doing an album. It was kind of a bit weird to figure out where to go next. I ended up doing this track that I sang and wrote the vocal on as well. I just really love how it came out. And today is the first day I get to play it as well.

The Nocturnal Times: Which cities are you excited to return to since the pandemic?

Matt Nash: I’m excited to go back to the UK again because it’s where I’m from. Some of the shows in the north of the UK…crowds are just crazy, they lose their mind. I’m also really looking forward to Tomorrowland this year as well with the STMPD guys so that should be fun. That festival is just a crazy, crazy Disneyland vibe. I think that those are some of the highlights. I think there’s some stuff in Ibiza as well so that’ll be fun.

The Nocturnal Times: Are there any other projects you’re currently working on that you’d like to talk about?

Matt Nash: I released a plugin for producers a couple months ago, which is sort of a little side project that I’ve worked on for three years. That’s because a chunk of my audience are obviously aspiring producers and are wanting to do the same sort of stuff. I just had this idea and followed it through. It was mainly a COVID project since I had more time in my hand. That’s something that’s taken a bit of time but it’s something I really enjoyed doing.