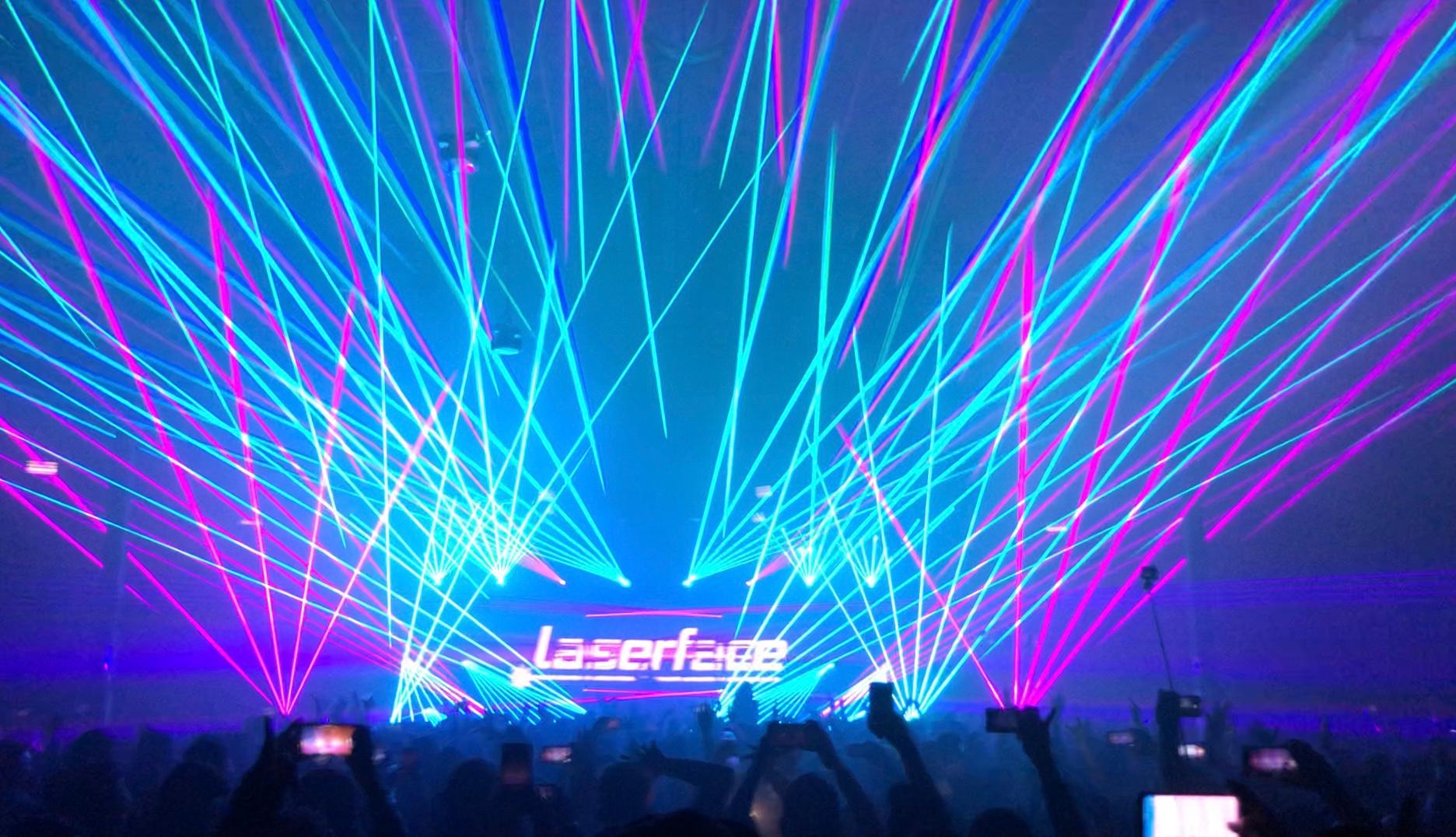 The prolific Laserface show, brought to us by Gareth Emery, highlighted what was another magical Miami Music Week. On Friday night, Mana Wynwood transformed into a trance haven filled with music and awe-inspiring lasers to match. After a few years away, Gareth Emery returned to Miami Music Week on a grand scale.

Taking on the Friday night of Ultra weekend was no small feat for Gareth and the Laserface team. With lots of hard work and tireless preparation, there was no doubt Laserface Miami was going to be the week’s main attraction. Along with the stellar production, the supporting artists came by way of renowned DJ’s in their own right; Tritonal, Gabriel & Dresden, Omnia and live perfomaces by the one and only Emma Hewitt.

Featuring a setlist comprised of new album music as well as some classic dance tracks, Gareth Emery treated fans to two hours of crowd favorites, euphoric melodies and plenty of uplifting and high bpm mixes. Each and every song played was accompanied by multicolored and uniquely designed laser shows from Anthony Garcia a.k.a. Nicelasers.

Kicking things off with his intro and brand new opening track, Gareth took to the booth with his tunes primed and lasers beaming across the Wynwood warehouse. Gareth Emery’s staple tracks such as the classic instrumental “Arrival” hit home to the long time fans, while vocal favorites “Reckless,” “Saving Light” and “U” came on early, inciting a few sing-alongs.

As the set progressed into the second hour, the bpm got turned up and the uplifting mixes came out. Trance and lasers are a beautiful thing when united, and in an effort to make his show solely focused on that, Gareth did not hold back. Pulse pounding remixes of Gareth’s “Sanctuary” and “Call To Arms” were standout bangers. The set included a respectful tribute to the late Keith Flint of The Prodigy with “Smack My Bitch Up” and a mesmerizing moment of lasers synchronized to The Killers’ “Mr. Brightside” were showcased in the ensemble.

Closing out the night was a fitting finale of “Kingdom United” and a sincere salute to the crowd who came out and spent the night at Laserface during a massive weekend in Miami.

We had the opportunity to sit down with Gareth Emery following the event to chat about Laserface, his new albums, Ibiza, Game of Thrones and more.

TNT: Making your Miami Music Week return after a few years off, how does it feel to be back and to bring your own show to Miami?

Gareth Emery: I didn’t do the last couple of years, last year a friend got married and I wanted to be at the wedding, the year before there was just nothing that looked particularly fun so I just decided to not come. These days, I don’t think Miami is essential to go to, kind of take it or leave it now, but we wanted to do Laserface in the South and not just east coast in New York or west coast in L.A. It’s nice to be back here and do Laserface, get ready for the new album and we are super happy with how the show came out.

TNT: So let’s go right into Laserface. How do you feel it went last night and also having to compete with the other events and Ultra Day 1, what was going through your head leading up to the event?

Gareth Emery: I don’t fucking know to be honest… The show went so well but in hindsight it was probably a really dumb move because we had fucking 7 weeks to promote this thing and like you said, going up against Ultra Day 1 and not realizing that went until 2 a.m., maybe if I had I wouldn’t have done it. a good thing I didn’t because the show was slammed and everything turned out great but it’s a testament to how hyped people are about Laserface.

TNT: What do you think about the Laserface progression since the first one in New York up until now as far as lasers, programming, and setlist?

Gareth Emery: Setlist is easy enough but programming the show has got better and has got better. The first Laserface I turned up, doors were in an hour and there were no lasers. They got setup during the opening DJ’s set. how the first Laserface went. I was so fucking stressed, I was like I’m going to have to leave the venue and go do something else because there’s a good chance we’re not going to have lasers for my set. The opener had some lasers because they needed to correctly set them up and in the it all turned out well, but for last night fucking four hours before doors the entire rig was setup and ready to go. We had time to run through half the set and thought should we do anything else, it was very relaxed. Anthony and Kassy have been amazing as well as the production crew at just getting the build more efficient.

TNT: Expanding on Laserface, you guys just announced you’ll be taking the show to Ibiza. We know you have been spending a little time living in Ibiza, whats your connection to Ibiza and why was that next?

Gareth Emery: We were living there for the Winter, I’ve always loved Ibiza, haven’t done a show there in a while and being there put it in the forefront of my mind. I love Amnesia, its the most legendary trance venue on the island and I’ve always wanted to play the terrace at Amnesia, I’ve done a bunch of shows in the main room but never the terrace. When we got the offer to do the terrace as a show, I said I’ve got to do this, too good not to. a great room and a great place to debut in Europe because everyone can fly there, pretty cheap to get to and everyone being there on vacation will make for a pretty great atmosphere.

TNT: So while planning all of this, you also announced two new albums coming, one solo and of course Kingdom United as well?

Gareth Emery: The solo album will probably be next year, ‘Kingdom United’ is the collaborative album with Ashley Wallbridge and is a bit more underground, a bit more back to my roots with Garuda. That has just two vocal tracks on there which I’m super excited about it coming out May 10th. I’m also writing the solo album as in like writing songs, so for me its really important to get back into the role of being a song writer and going in on these sessions and being in the room when songs get written. I’ll probably spend six months writing songs and three months producing and I want to say it will drop beginning or mid next year.

TNT: How much new music did you play at Laserface last night?

TNT: Lets talk “Lion Heart.” How do you feel the crowd reaction has gone over in your live shows and overall feedback including the animated music video?

Gareth Emery: It’s going really well man and I didn’t see “Lion Heart” as being one of the biggest tracks on the album but we put it out and people have really engaged with it. It has a good melody and gone down really well. The music video was originally going in a different direction and it was strange because the one we tried to do looked like shit, so we canceled it. Then one of our team found the animation on Youtube and said this is beautiful, why don’t we take this and repackage it, we did a deal with the animator and I thought it was a great fit for the song.

TNT: Game of Thrones in two weeks? What are you expecting?

Gareth Emery: Two weeks? We’ve been waiting two years for it! They’ve finally got back on track with the show, I felt there were a few seasons where it went off the boil. They will be back on track, each episode will be like a movie and I really hope they wrap it up nicely. Regardless of what happens this season, it really has been the most amazing T.V. show of our generation and once done we just need George R.R. Martin to finish the fucking books. The last book came out in 2011, he has two more left to write so maybe this will all wrap up 2030.

TNT: How do you manage your time off with family versus when you’re in work mode?

Gareth Emery: Well being in Ibiza has been good because we haven’t got a nanny, so we’re doing everything ourselves which has been kind of cool. When I’m at home I’m more in parent mode but when I’m traveling its 100% work. You have to be very efficient with your time. I’m very difficult to get a hold of, deliberately. I change my email address all the time, change the phone number once every year or two. I kind of try to keep my phone and email inboxes both virtually empty other than a select few people who need to know about it. By trying to avoid all the external noise of the world, it gives me time to make music and create cool shit.

TNT: With all of your successes, your family, traveling the world, making more music, Laserface, another album incoming, where do see Gareth Emery going in the future?

Gareth Emery: There’s a really awesome phrase I heard in a podcast I listened to recently called “Blissful Dissatisfaction,” meaning to enjoy the moment you’re in and appreciate everything you’ve got but you have to remain dissatisfied. I’ve never been happy with the position I’ve been in career wise. Whatever success I’ve had, it’s like wow we’ve done an amazing show, Laserface in Miami for instance, it’s an hour of celebration and I’m on to the next. I’m always thinking about what comes next and trying to make sure days of my career are in front of me rather than behind me. I’m lucky to be in dance music because if you’re a professional sports player, by the time you’re my age you’re fucking retiring or if you’re a teen pop artist you can have a short career. in dance music, a lot of our biggest artists like Tïesto and David Guetta are forty or fifty and I’m fortunate to be in this world where I am able to reinvent myself.