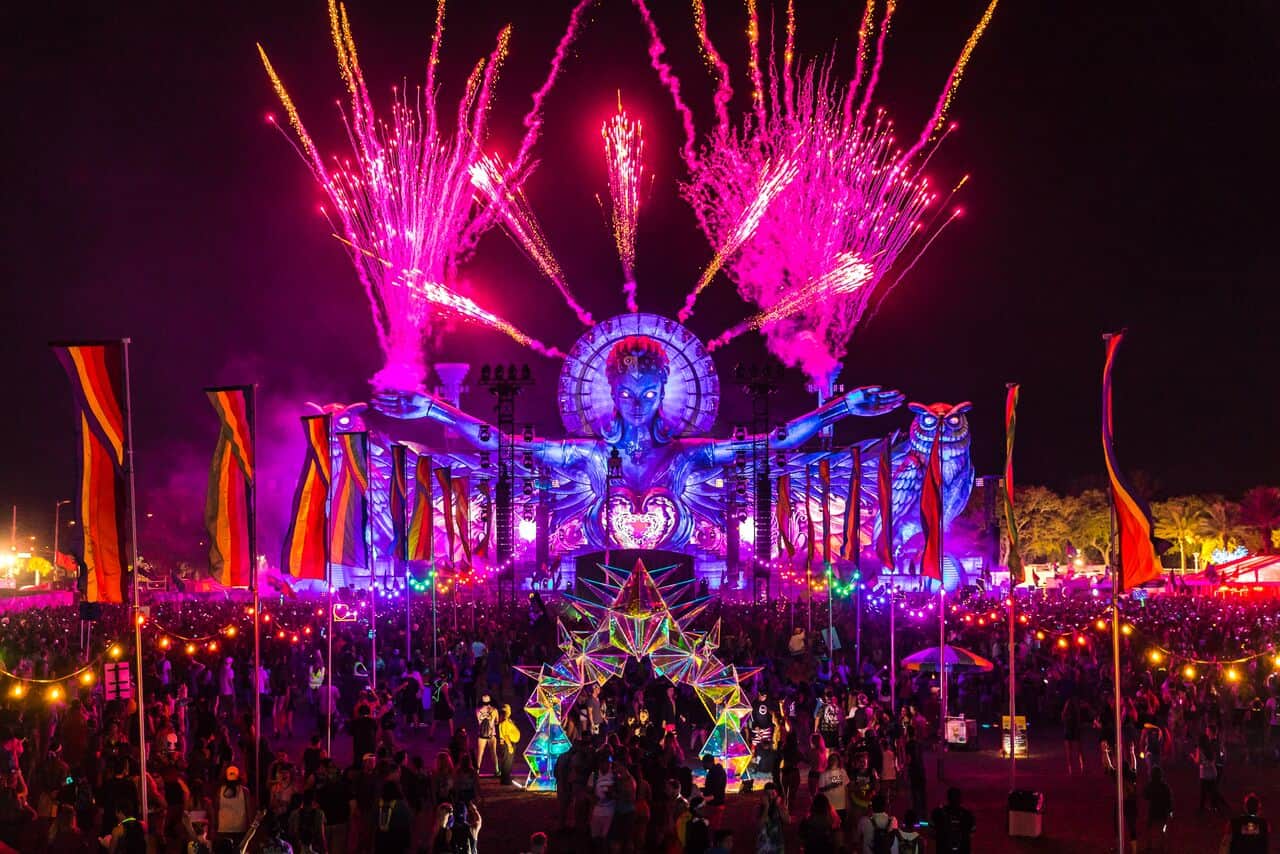 This year’s kineticFIELD design was a compilation of several prior EDC stages. EDC Vegas’ GAIA structure was the main focus, while past year’s designs were also incorporated like the stunning night owls on each side, and the circular temple piece set behind Gaia, the Greek Goddess of Mother Earth. Encapsulating themes of nature and earth with technology, kineticFIELD came truly alive with the addition of water and fire elements via colorful fountains bursting up around the stage, and 21 flaming pyro units. An astounding 450 multicolored lights and 28 beaming lasers spanned the 240-foot-wide gargantuan structure. kineticFIELD reigned as main stage with legendary performances by Galantis, Marshmello, Seven Lions, Alan Walker, Rezz, KSHMR, Jauz, NGHTMRE, and a massive world premiere b2b with Diplo and A-Trak.

Photo by: aLIVE Coverage for Insomniac

What has become one of Dimitri Vegas & Like Mike’s signature performance elements brought Orlando’s feet literally off the ground, as their “Crowd Control” moved thousands of fans from the left to the right in unison with their voices. Their ideal festival set was packed with monstrous drops and champion tracks like “Tremor,” “The Hum,” Axwell /\ Ingrosso’s “More Than You Know,” and Avicii’s “Levels.” Saturday night also brought Armin van Buuren to close the weekend out on main stage, sending the crowd into a state of trance under the Electric Sky. The undeniable power and booming energy was in full force from start to finish. Whether you were in the front, back, left, or right, Armin was setting souls on fire.

From beginning to end, circuitGROUNDS entertained crowds in an entirely new and separate area across the street from Tinker Field. The expanded footprint had circuitGROUNDS spanning 166 feet in width with over 1,000 video tiles lighting up the massive pyramid structure. Additionally, 6 cannons blasted streamers and confetti above the crowd – the cherry on top of this epically wild party. Fans got a taste of the true Bassrush experience as it took over circuitGROUNDS Friday night. Bassheads from all over posted up to be blown away by 360-degree bass coursing through their bodies. Possibly one of the most memorable moments at circuitGROUNDS this year was Kaskade’s unforgettable sunset performance, where he mixed classic heartwarming melodies with progressive sounds. His emotionally refined tracks had the crowd absolutely enthralled. The rest of the weekend at circuitGROUNDS was blaring with mega DJ/Producers like Zedd, Slander, Excision, Getter, Bonnie X Clyde, TroyBoi, Sikdope and more.

This year’s neonGARDEN hosted two jam-packed days of heart-pumping trance, deep house and more. Returning under a giant circus tent beside Lake Beardall, the stage featured colorful lasers from all ends of the spectrum and a sparkling disco ball overhead. On Friday, neonGARDEN hosted Insomniac’s beloved trance brand, Dreamstate, where acts like Gareth Emery and Aly & Fila stole hearts with their melodic tunes. Also taking stage over the weekend were Green Velvet, Simon Patterson, Kristina Sky, Grum, Infected Mushroom, and Jamie Jones amongst others, all while headliners were zooming down the 300-foot-long zip-line above the lake right next door. Brought back again was the vibrant neon tunnel that runs behind the lake, bridging the gap between neonGARDEN and this year’s Carnival Square, which took over the old circuitGROUNDS location. The Square was a new addition in 2017 – an inventive hang-out space for fans to munch on all kinds of delicious food and beverages while taking a breather and lounging out at the picnic tables that were waiting to welcome their squads.

Corona Electric Beach made another appearance this time, with a larger space than before to accommodate fans who came to see special performances by Party Favor and A-Trak while dancing in the Florida white sand, in the heated pool, and underneath palm trees and sunshine. Another amazing feature this year was the boomboxARTCAR, set behind the ever-popular LED-lit Dream Wheel. Hosting surprise sets all weekend long from acts like Mahalo, Craig Williams, Cocodrills, Saeed Younan, Ezgod, Fluencee, Sam F and more, this space was bumping both days with crowds of all sorts showing off their shuffling, poi, hula-hooping, and gloving skills.

2017’s VIP experience was top-notch, equipped with exclusive amenities like a lively ball pit, a full-service beauty bar, body paint station, and a full-blown kandi bracelet making station. VIP treatment also included EDC’s signature cocktails like the EDC Mojito and SoCo Lemonade, in company with delicious bites from the Meltdown Grilled Cheese and Surf & Soul Tacos. And lest we forget the pristine, elevated view of kineticFIELD…VIP surely did it up this year.

Insomniac continues to stand out as they discover meaningful ways for fans to engage with one another at their festivals. They welcomed To Write Love On Her Arms, a non-profit serving as a bridge to help those struggling with depression, addiction and suicide. Here, fans had the opportunity to connect via hand-written notes and inspirational quotes, while project #OpenTalk returned to provide counseling and education services for substance abuse, sexual health, and mental health. Love, Hope, Strength went the extra mile to give fans a chance to save a life by participating in the national bone marrow registry.

Amidst all of the buzzing excitement, beautiful art installations, fabulous costumed dancers, crazy carnival rides, glowing lanterns, neon daisies, a sea of 80,000 screaming fans, and 80 of the world’s most iconic acts in dance music, EDC Orlando saw yet another wildly successful year. Next up – Dreamstate SoCal, taking place November 24-25 at the NOS Events Center in San Bernardino, California. See you out there headliners!