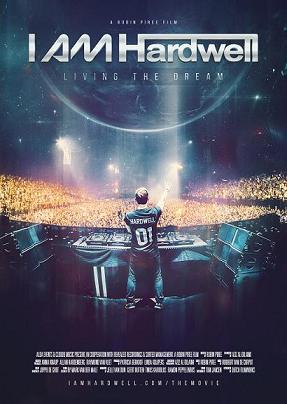 Hardwell—two-time DJ Mag number one—will premiere his new documentary, “I AM Hardwell – Living The Dream,” during Amsterdam Dance Event (ADE). The official red carpet premiere of the new documentary will take place on October 13, 2015 at Pathé Tuschinski Theatre in Amsterdam during the annual ADE festivities.

Following the worlds #1 DJ around world during his “I Am Hardwell” tour, fans are given insight into the life of a traveling musician as he hits 34 cities to deliver his live concept to millions of electronic dance music (EDM) enthusiasts.

The Revealed Recordings mogul released his “I AM Hardwell” documentary ahead of earning the top spot on the DJ Mag poll in 2013.

Hardwell about the documentary: “I am thrilled with the result. My life has been one huge roller-coaster ride since I was chosen as #1 DJ in the world back in 2013. The expectations kept on getting higher so I had the feeling I had to keep on raising the bar. ‘I AM Hardwell – Living the dream’ will show you that not only my music but also the concert tour has had a huge development in the past few years. I am beyond proud of the team who made this possible and of all people who did just about anything for me during this journey we have shared together.”

Following the documentary release, the EDM superstar will release a new remix album, United We Are – The Remixes, on November 13.

Related Topics:hardwelli am hardwell living the dream
Up Next