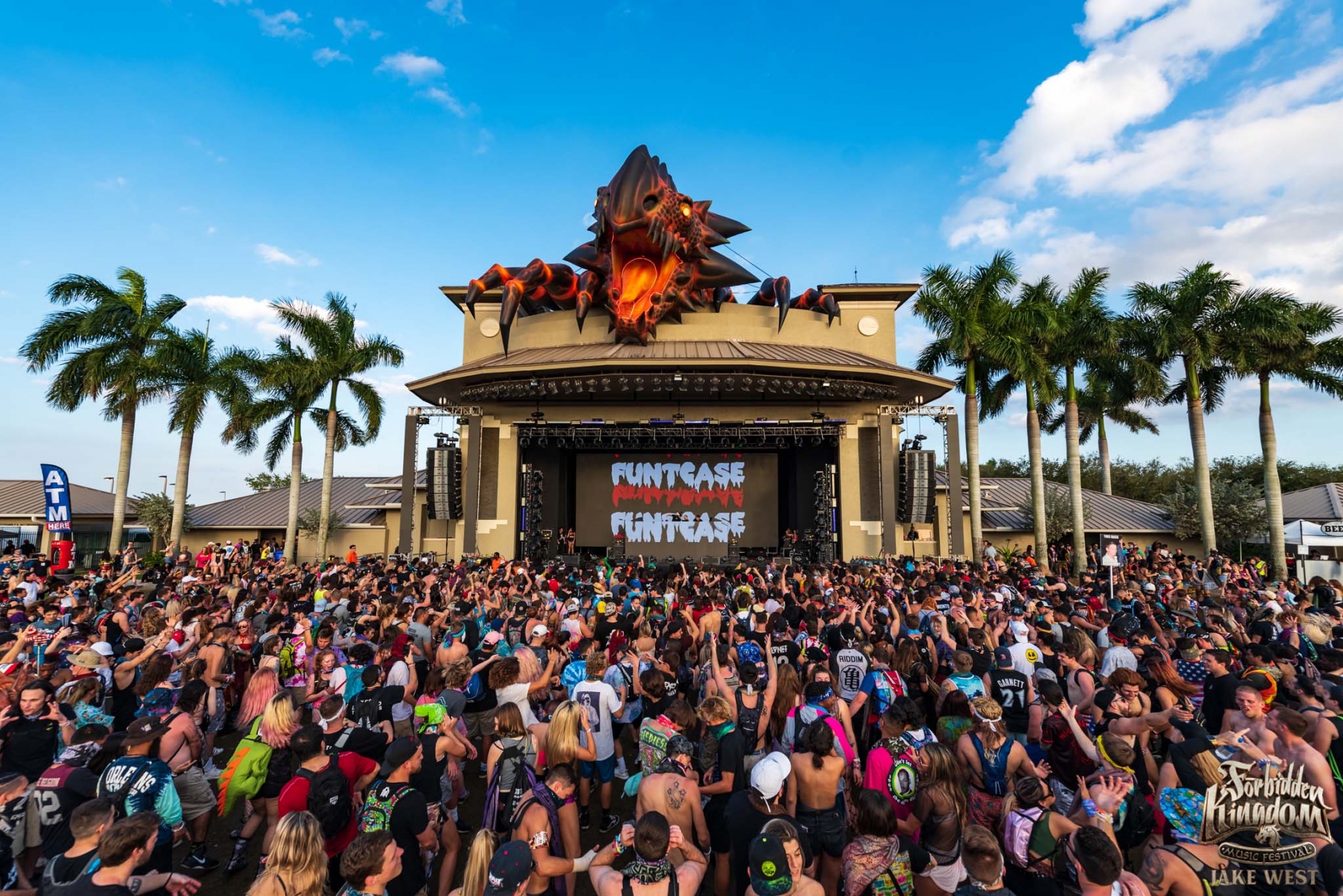 This past President’s day weekend, February 16-17 was the first annual Forbidden Kingdom Festival held at Sunset Cove Amphitheater in Boca Raton, Florida. Backed by a beautiful venue on a lake, a giant dragon draped over the stage, and a packed lineup, this first-time festival had all the makings for a headbanging good time. There were four things that really stood out to music festival veterans that are going to keep Kingdom around for many years to come, so we’ve counted them down below for your reading pleasure.

If you have ever been to an Apex Presents event then you know you’re going to get a production that is nothing like you have ever seen before, and Forbidden Kingdom was no exception. Based around a medieval story, this festival had it all including: a giant dragon positioned on top of the stage seemingly ready to pounce on the crowd at any moment, mystical characters from the festival’s story walking around and interacting with guests, and of course a laser show that was absolutely mind-melting.

Walking up to the entrance, you were immediately immersed in the festival’s story. Entering a pathway framed with story banners, you instantly felt as if you stepped into another realm. Upon getting into line, security and event staff were very friendly and made the already short time in line go by even faster. Adding to this, we have all been to those festivals and shows where we wanted a keepsake to remember the good times, yet there is only one merchant booth and the line is extremely long. Kingdom heard the cries and solved the issue by not only having a huge merch booth but incorporating a second one that was equally staffed well, so festival-goers can get right back to their headbanging.

The Sunset Cove Amphitheater is right up there with the best of the best when it comes to smaller venues that are able to hold festivals. The venue has the sun setting over the lake with a cool breeze, there are ample amounts of shaded trees and grass areas to sit on, and there isn’t a bad seat in the place. The good seating wasn’t all that was offered by the venue – there were also countless different food vendors selling a variety of eats from barbeque sandwiches, to giant chicken tenders on a stick, to pineapple frozen drinks, and even frozen rum runners to beat out the Florida heat. Sunset Cove had standalone bathrooms and water fountains which made the event extra enjoyable to all festival goers (something we can all relate to.)

Forbidden Kingdom had not only great production at an amazing venue, but they also had a majorly stacked lineup. The Kingdom-goers were also graced with not one but two Excision sets, one of which was a B2B with Dion Timmer. We ran into Dion Timmer and asked him to share his thoughts on the festival. Here’s what he had to say:

“I think it’s pretty awesome – I love playing in Florida. I love playing Boca especially this time of the year. The venue, and everything, is fucking awesome.” [As a first time festival] Everything is well organized, awesome stage, awesome production… I hope to play it again next year.”

Putting on one of the best sets of the weekend was the always high energy Dubloadz. His savage wonks and deep hitting bassline had every person head banging and dancing their hearts out. All we can say is everyone who is reading this and has the opportunity to book or see Dubloadz for any event, definitely do it – he is one of a kind. We were able to speak with him for a few moments, so here’s what he had to add in regards to the fest:

“Yo what’s up this is Dubloadz and I’m out here at Forbidden Kingdom, first year festival and pretty fucking sick. Can’t complain about anything, the vibe is great, the people are great, crowd is great, it’s run smoothly and I look forward to hopefully playing it again next year.”

Florida is named time and time again as one of the top states for parties, and the crowd at Forbidden Kingdom really lived up to their reputation. Throughout the festival you could see hair getting whipped back and forth and mosh pits galore, fully testing the rail’s strength. The outfits of all the South Florida were top notch, while the guys even slayed and stayed true to the theme with a medieval kick on many outfits. For us personally, the PLUR and overall good vibes at Forbidden Kingdom was unreal and some of the best that we have ever seen at a festival. People looked out for one another, sharing sunscreen, mirrors, , gum, fans, and water. We headbanged and danced with people all night, gave and received , and even got gifted a Forbidden Kingdom bandana. Would easily say it was a win!

Thank you Forbidden Kingdom for a weekend of music, magic, great vibes and the wubs that South Florida was really looking for. Can’t wait to see you all back there next year!