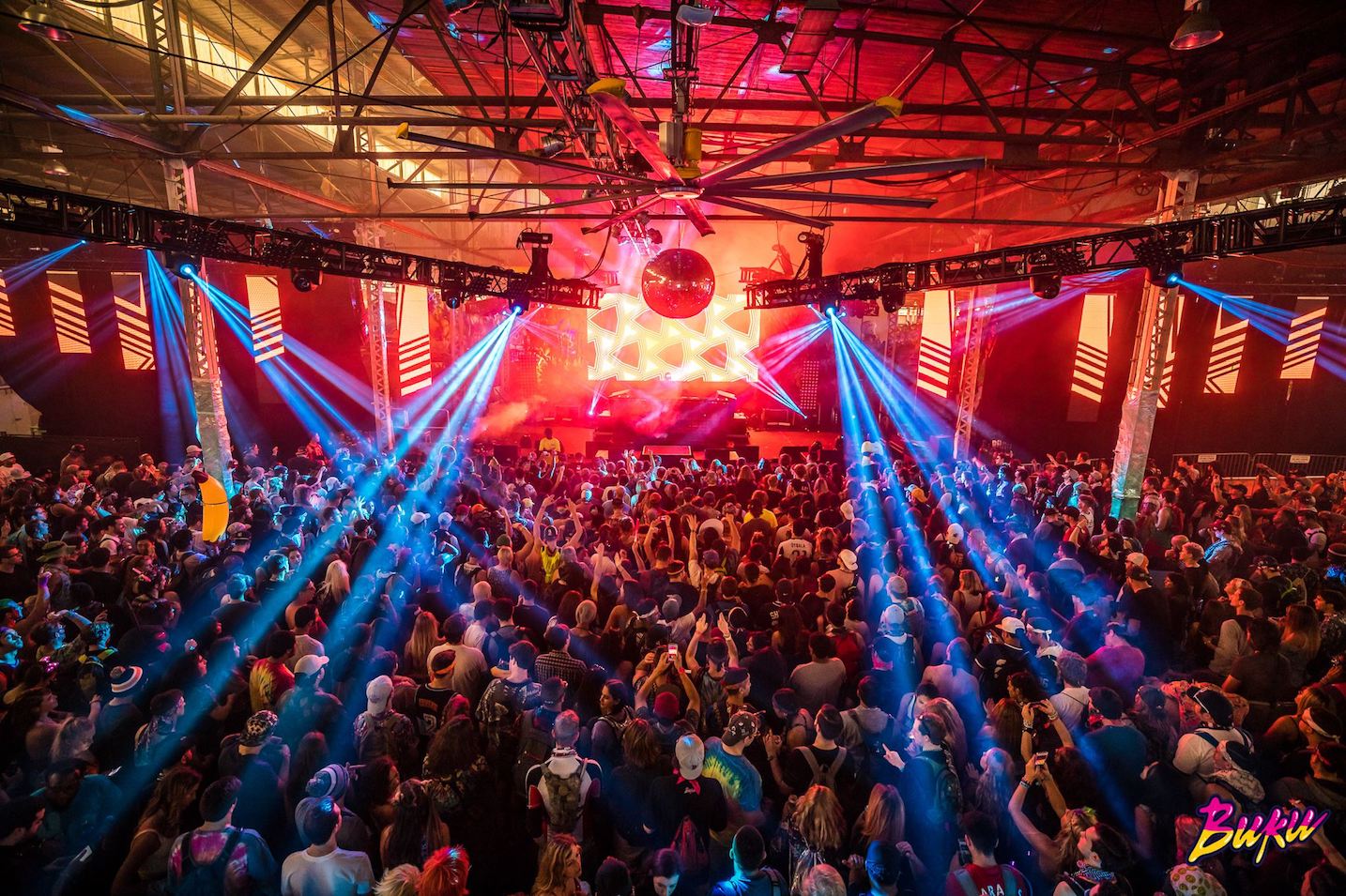 For two days in March, the BUKU Music + Art Project transforms the warehouses of Mardi Gras World into the wildest party in New Orleans.

The Crescent City was blessed to host big name artists like Deadmau5, Travis Scott, Jauz, Zhu, Grizmatik, Run The Jewels, and Cashmere Cat among many others. The two action-packed days were accompanied by several BUKU Late after parties featuring Zeds Dead and GRiZ headlining shows on Friday (3/10) as well as Deadmau5 and Gramatik headlining shows on Saturday (3/11).

In a short period of time, BUKU has become one of the hottest music festivals in a city that features live music every day of the year. It’s no surprise that BUKU has become so popular, as the festival is one of the most well run in the region. Although a fairly small festival, BUKU is always packed with hot artists, beautiful art installations, and the wildest crowd in the dirty south. One of BUKU’s greatest strengths is its layout. One can easily move throughout the festival, even in its most crowded areas. Lines for food, beverages, restrooms, or water never get out of control, and the fans that attend each year make up one of the best crowds in the country.

This year was no exception, as BUKU went off with very few issues. One of the hiccups during the weekend was Young Thug missing his set due to a personal emergency. But always quick on their feet, the BUKU team brought in New Orleans’ own Juvenile to replace Young Thug. Although initially upset, the audience rallied with the appearance of the local star.

Following the small blunder, Grizmatik came onto the Powerplant main stage and quickly got to business. Both very beloved artists in New Orleans, GRiZ and Gramatik brought a massive audience outside to bounce with their electrofunk jams. Performing new tracks like “As We Proceed” and old hits like “Digital Liberation is Mad Freedom,” the trio pulled off one of the most grooving sets of the weekend.

Closing the main stage on Friday, Travis Scott brought the house down with old hits like “Upper Echelon” and “Antidote,” as well as several from his latest album ‘Birds in the Trap Sing McKnight’ like “Goosebumps” and “Pick Up The Phone.” Scott had the stage decked out in bird cages echoing the theme of his recent EP.

The most hyped set of the night might have been one of the last, as Zeds Dead threw down an amazingly eclectic set that did not disappoint. As per usual, the duo seamlessly interweaved techno, house, trap, and dubstep tracks together to close down the Float Den. In an unprecedented display of courage, one clearly blacked-out fan decided to climb to the top rafters of the warehouse for a bird’s-eye view of the rowdy Nola crowd. Clearly possessing the largest testicals in all of New Orleans, this young man miraculously climbed down to safety, receiving a huge roar from the audience and possibly a meeting with some of New Orleans’ finest at the bottom. Wherever that man is now, we salute you. After the set, Hooks from ZD would join Jauz and GRiZ on stage at the All Good Records after party.

The second day of the festival came out of the gate sprinting, as hot artists like Alina Baraz, Rezz, Amine, and Tycho threw down huge sets during the day. But as the sun went down and the BUKreatures came out, Herobust and Ghastly put on a B2B set worth breaking your neck to. The ‘GhastBusters’ dropped everything from “Get on This” and “Vertebreaker” to remixes of “Ocho Cinco” and “Broccoli”. The Float Den was packed to the brim, as bassheads flooded the warehouse to see one of the hardest sets of the weekend. The combo of Ghastly and Herobust was so sublime that it calls for more collaborations between the two.

Bridging the gap between Herobust B2B Ghastly and Cashmere Cat, Killer Mike and El-P of Run The Jewels brought energy to the Power Plant. Charged with the recent release of their highly anticipated ‘Run The Jewels 3’ EP, RTJ electrified the main stage before Deadmau5 shut it down with his headlining set.

After a disappointing rain-out on the last day of Voodoo Fest 2015, fans were determined to get Deadmau5 back to the Crescent City ASAP. Addressing the crowd midway through his set, Joel exclaimed, “I guess third time’s the charm, eh, New Orleans?” The trance-house legend also addressed the lack of his signature cube, which for some reason was missing from the performance. In its place was an array of light panels which, although stunning, did not have the same effect as the traditional layout. Whatever the reason was for the mix up, Deadmau5 promised Nola a cube the next time he visits. I, for one, will hold him to that promise.

Regardless of any technical difficulties, Deadmau5’s set was magical. The seamless transitions and perfectly engineered sounds that you’d expect from an icon like Deadmau5 were all there. His lighting engineer flexed a massive collection of strobes, spotlights, and panels in addition to a monolithic screen. Playing all the mainstay hits like “Ghosts n Stuff” –alongside “Moar Ghosts n Stuff”– “Strobe,” and even throwing Kaskade’s vocals from “I Remember” into a transition, Deadmau5 was able to satiate the hungry Nola crowd with all of their favorites.

BUKU Music + Art Project 2017 knocked it out of the park. Completely avoiding the forecasted rain, BUKU was accompanied by perfect weather. For any Hip-Hop or electronic music lovers living in the South, BUKU Music + Art Project is a festival you should know about. For five years straight, BUKU has drawn the world’s most popular artists to the warehouses of Mardi Gras World, selling out year after year and leaving fans wanting more. If you live in the area and are even considering attending BUKU 2018, buying early bird tickets is never a bad bet. BUKU is one of the most innovative and energetic young festivals in the circuit, so be on the lookout for what the BUKrewe has in store for next year.