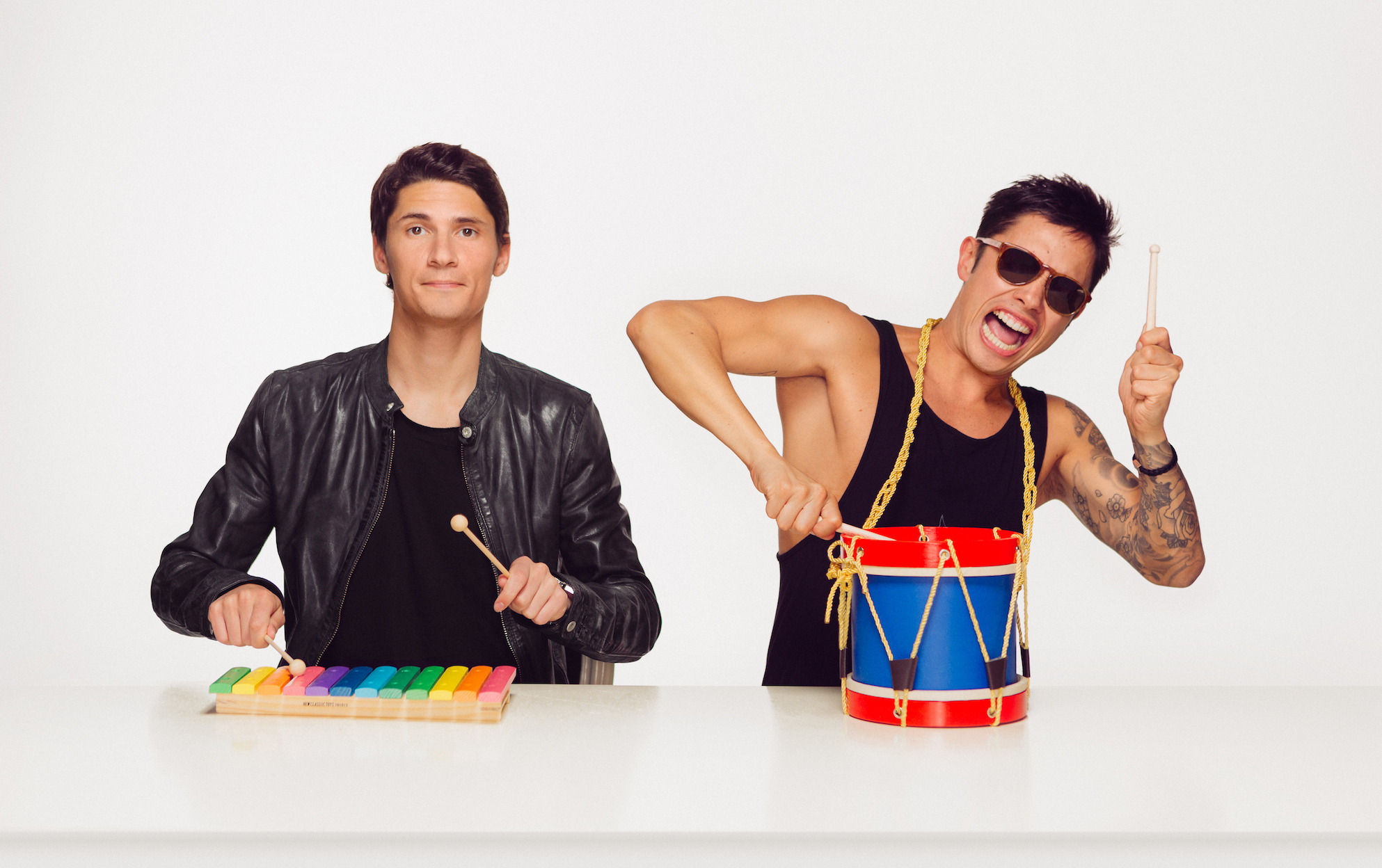 Bassjackers at High Voltage: How the Guys Took on Music Week [Interview]

One of the most charismatic, high powered and well-loved duos of dance right now, Bassjackers fire up crowds from all corners of the globe with their magnetic stage presence and one-of-a-kind production style. Both Marlon Flohr and Ralph van Hilst bring every ounce of their opposing yet simultaneously perfect complementary personalities to the table when it comes to producing banger after banger. Their charm in compelling fans from all over the world to join their ever-influential journey in dance music only continues to reach new heights as time goes on.

One one end of the spectrum, one half of Bassjackers has Ralph who prospers in developing the all-encompassing electrifying sound behind the scenes of all things Bassjackers. Ralph’s calm, cool and collected nature has been one key to establishing, maintaining and advancing the group through putting his creative mind and melodious imagination to the tracks. On the other end of the spectrum, Marlon’s wild heart and vitality complete the duo as he takes every crowd by storm with non-stop hype and dancing. Tuning into each and every performance to feel out the diverse vibes, Marlon’s innate ability to put on a show and DJ like no other is the last piece to the puzzle of how Bassjackers ascend as a stand out pair.

Thriving since their 2011 single “Mush Mush” which was picked up by legendary Tiësto for release on his Musical Freedom label, Bassjackers have conquered the industry with numerous chart-topping bangers and lest we forget the insanity of collaborations from these guys. Fellow producers and industry front-runners like Afrojack, Dimitri Vegas & Like Mike, Martin Garrix, KSHMR, R3hab, Showtek and more have absolutely rocked collaborations with Bassjackers. There is no denying that the endurance of this inspiring duo is seemingly endless, and the scene just can’t get enough.

With each new year comes fresh and exciting elements of Bassjackers that fans wholeheartedly love and look forward to experiencing. Their daring explorations of sound and performance create some of the most distinctly riveting music out there right now. 2018 is going to be the year of surprises by Bassjackers; check out our exclusive interview below to see what’s upcoming, a look back on Miami Music Week’s whirlwind of events, and of course, all things music with Bassjackers.

The Nocturnal Times: We are back at it for another Miami Music Week! You guys are kicking things off at the Spinnin’ Hotel tonight, do you have anything special prepared for your set tonight?

Bassjackers: Oh yeah definitely. We’ve been working hard. Miami is always special, I mean you come here and it’s sunshine everywhere, it’s the perfect setting. We have Ultra and Spinnin’ this week so we prepared a lot of new stuff. This is the week for premiering a lot of new stuff. We know a lot of people back at home who will listen to our sets so we are actually eager to see all the feedback from everybody about our new tracks! That’s always a moment when we get a bit nervous because it’s new stuff and music comes from within, it’s a part of yourself to put into it and to get judged. I think maybe 50% of the set is all new music and we’re looking forward to reactions from the crowd here and people back home.

The Nocturnal Times: Speaking of live sets and new music, how do you guys handle it when the crowd isn’t feeling it the way you wanted them to?

Bassjackers: Marlon, he’s a real DJ DJ. We have two separate “jobs” (it doesn’t feel like a job). I’m a producer and he’s a DJ. We started out as me being the guy who thought it was fun making tunes on a computer, and he was the guy who thought it was fun just to make mixtapes and do all that stuff. So Marlon is a real crowd pleaser, he knows how to respond to a different crowd. Sometimes they want a bit more poppy, bootlegs or whatever, then you have the more raver crowds who like it rough… Marlon, he’s the perfect DJ. He can switch really easily and so it’s not a problem – give us whatever!

The Nocturnal Times: After your Spinnin’ show tonight, do you guys have any plans to see friend’s performances? What else do you have planned for the week?

Bassjackers: I just came from watching Lucas & Steve, they did a really good job. I just met Hardwell who did a small stage appearance which was awesome. I mean we’re with Jay Hardway who is a good friend of ours, that’s also what makes Miami a lot of fun. This is our 7th Miami in a row and we know these guys now so well, so it kind of feels like going on a vacay with friends. In Miami I think it’s hard to do real business, it’s a lot of fun. I think music and fun are so related anyways this is the perfect setting.

The Nocturnal Times: Talking about performing more, do you guys have any songs in particular that you’re always psyched to play for the crowd?

Bassjackers: Definitely. You always have these milestones and pivotal moments, and we had “Mush Mush” back in 2011 which was our big break tune. That was really special, then we had 2014 where we kicked it off with “Crackin’” with Martin Garrix. For us that was so important and especially cool to see Martin, he’s so big now. Now we have a few tracks, especially new ones like collabs with Dimitri Vegas & Like Mike, and those are special. We know the crowd and our fans are really eager for us to release it, and we’re busy with it. I think it won’t take too long (that’s kind of a scoop!)

The Nocturnal Times: You have extensive remixes and a lot of hype songs. Do you guys ever take your favorite songs and want to give them your own twist?

Bassjackers: We actually like doing originals, originals are so cool and that’s what makes stuff more intriguing. But every now and then people come to us and ask if we want to do a remix, and we’re really picky about it. We did one for Lost Frequencies because we love him as an artist, I love his music and I love that track so much, that’s also a thing. I mean if I do really love a track I’m like okay, this is a perfect track why would I mess with it. But, at the other end it would be cool to make a really cool version of it so we can play it. Then you have a track you love, mixed with the thing you love the most which is really making bangers.

The Nocturnal Times: Your recent single, “Are you Randy” is really taking off. Tell us about it!

Bassjackers: That’s a really special one. Bali Bandits started that track and they do really clubby kind of stuff, and we are more big room, festival crowd. So we were actually missing a track for our set which was a bit more clubby, so that’s why when they came to us with the idea we were like okay cool, we’ve actually been waiting for this. We took the track and made it really effective as well and now we have this hybrid thing. The drop is more Bali Bandits and then we did the breaks and everything.

The Nocturnal Times: You guys have been doing Jackin Da Bass Radio for a while, when you started that did you have a specific vision for it?

Bassjackers: It’s a shame Marlon isn’t here, we did want to make it a bit special. We were always looking for tracks which weren’t played on other radio shows but it’s hard to find them. It takes a lot of time and especially when we first started Jackin Da Bass as a weekly show, we now do it monthly. We have more time meaning we can make it a bit more special and search for those tracks. We also started out with this thing called Signed by Bassjackers which was a tutorial series. Now we want to see if we can link them up, but more news on that later!

The Nocturnal Times: So – every DJ/Producer is still human. What are some of your favorite things to do other than music?

Bassjackers: A lot! Marlon works out a lot and he loves it. He’s always really busy with food, he’s a real foodie. I think those are the two main things Marlon loves. For me, I love playing soccer with my friends. I don’t do it too much anymore but I actually love to surf. I mean music is a big thing but sometimes it’s hard to do music as a hobby or to relax, it’s also a bit of work even though it doesn’t feel like work. You kind of have to have those things where you can just let go and wind down.

The Nocturnal Times: With the rest of 2018, what are the rest of your plans for the year?

Bassjackers: We have a release coming up called Riddle. It’s an old song which has been reworked quite a few times and now it’s up to us.  Dimitri Vegas & Like Mike premiered it during their show in Antwerp at a Reflections show which was awesome to see, I was there for two nights it was an awesome show. Furthermore we have a lot of cool stuff that I’m way too eager to tell, but I’m not allowed! There’s a lot of stuff in the works and just follow us. I think it’s going to be a special year, we’re going to do stuff we have never imagined we’d be doing. For us we’ve been doing this for almost 11 years now and stuff tends to get boring. But, you gotta make it work well and reinvent yourself. Now we have the chance to work with people we would have never guessed. That always makes it really exciting.