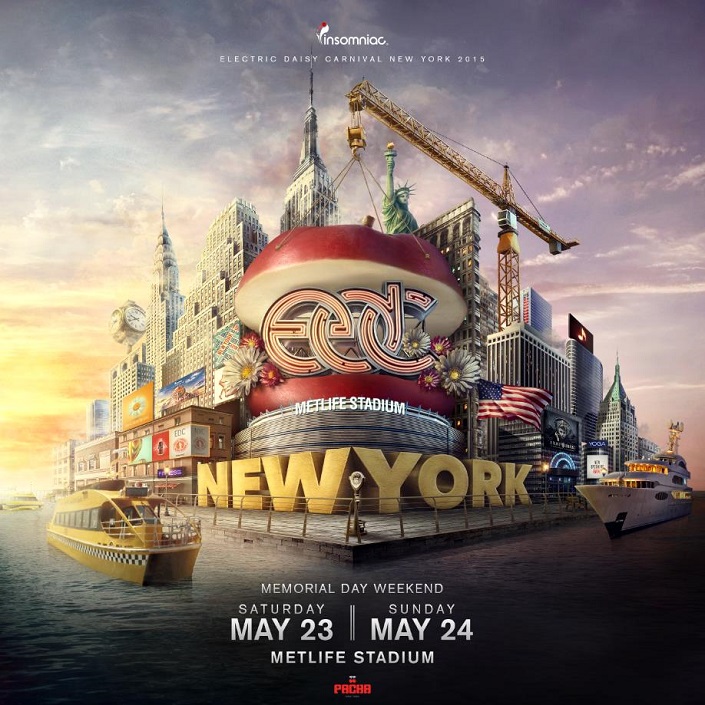 Stopping at the home of the NY Giants and Jets on the road to Las Vegas, EDC returns to the MetLife Stadium Memorial Day Weekend 2015. Creators of the globally acclaimed Electric Daisy Carnival, Insomniac Events, along with Pacha NYC (RPM Presents) are bringing the highly anticipated event to East Rutherford, NJ on May 23 & 24, 2015.

Since its New York induction in 2010, EDC NY has redefined the dance music scene in the tri-state area, creating a larger-than-life carnival of epic proportions. Curating a neon city within the city that never sleeps, Insomniac eccentrically provides partygoers with a complete sensory experience. Fully equipped with the world’s leading dance music talent, a slew of carnival rides, pyrotechnics, interactive entertainers, and thousands of headliners (YOU)!

Insomniac crafts a colossal carnival at MetLife Stadium consisting of the Kinetic Field, Circuit Grounds, Cosmic Meadow, and Neon Garden, which showcase various forms and genres of dance music across the two-day festivity. Whether you fancy trance, are devoted to house, committed to techno, or want to dabble in dance music of all sorts, Electric Daisy Carnival is the place for you!

In 2014, EDC NY boasted a memorable lineup, which included some of the most talented and prominent names in dance music. The weekend soundtrack from heavy-hitters Tiesto, Hardwell, Calvin Harris, and Afrojack, to Carl Cox, Adam Beyer, John Digweed, Krewella, and Headhunterz kept partygoers moving from start to finish.

Now’s your chance to be part of the EDC NY experience. Two-day GA passes are available for $229 + fees, and VIP for $349 + fees at http://newyork.electricdaisycarnival.com.