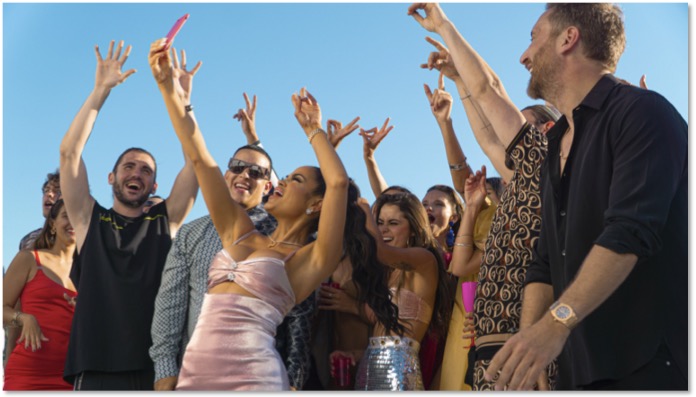 Two  of  dance  music’s  most revered acts, Dimitri Vegas & Like Mike and David Guetta, have teamed up with Afro Bros and two of the biggest Reggaeton names in the world, Daddy Yankee and Natti Natasha. Together, the collective of artists bring forth an absolute summer smash hit with their single, “Instagram” via Arista Records.

Between the catchy melody of the song, and the sizzling hot video, we can already tell that “Instagram” will become a staple throughout a multitude of artists’ live sets throughout summer 2019 and beyond. The dynamic official music video features all 6 of the artists on the single, bringing high-energy summer fun and the stunning Natti Natasha center stage.

Consistent chart-toppers Dimitri Vegas & Like Mike continue to demonstrate their ability and diversity to work with a variety of styles. The pedigree of their collaborations is a testament to their genre-bending capabilities, having collaborated with a diverse range of artists including Gucci Mane, Paris Hilton, Ne-Yo, Hans Zimmer, Wiz Khalifa, Snoop Dogg, and many more. Dominating the festival scene worldwide as DJ Mag awarded ‘World’s #1 DJ Duo’ and ambassadors for the mammoth global festival Tomorrowland, Dimitri Vegas & Like Mike productions are effortlessly catchy, and always create memorable main stage moments.

David Guetta has established himself as arguably the world’s biggest and most successful DJ of all time by colliding the worlds of dance music and hip-hop. By teaming up with some of the biggest names in hip hop, R&B and pop, and reinventing their sound for the electronic dance-floors, Guetta created pop alchemy. Black Eyed Peas, Kelly Rowland, Akon, Rihanna, Sia, Lady Gaga, Usher, Madonna, Justin Bieber, Nicky Minaj, Guetta’s quality as a producer has set a new template for the sound of commercial radio. Guetta has amassed over 50 million album and single sales; over 10 billion YouTube and Spotify plays; numerous #1 singles and Platinum and Gold certifications across the globe; two Grammys for Best Remixed Recording and dozens of other accolades.

Afro Bros, famed for playing various music genres like Latin house, afro house, moombahton, house and urban, round up the electronic fusion on “Instagram” with their tailored studio sound. Dabbling in tropical flavors with their most recent single and collaboration with Jamaican Reggae/Pop Star, Sean Kingston titled ‘How Many Times’, the Afro Bro’s contribution on “Instagram” demonstrates their musical diversity once again.

Daddy Yankee remains one of the major influences in the music industry with more than 11 million albums and  over 50 million followers through social media. Named as “One of the Most Influential Hispanics” globally by CNN and Time Magazine, Daddy Yankee made history in 2018 with 10 Guinness World Records with the title for his achievement as the First Latin artist to reach the number one on Spotify, as well as seven titles for the success of the hit song ‘Despacito’, performed alongside Luis Fonsi, and two additional titles for topping the Billboard Latin Rhythm Airplay lists. Currently the seventh most streamed artist on Spotify, he recently received the Icon Music Award by the Latin American Music Awards for his contribution to the music and the community.

Latin pop superstar Natti Natasha is an unstoppable force, with her music have grossed over one billion streams on  Spotify.  A  multi-platinum  and  Billboard  award  winner,  Natti  was  dubbed ‘most  watched  female  on  YouTube in late 2018 thanks to the music video (‘Criminal’) for her collaboration with Ozuna, which has received a staggering 1.8 billion+ YouTube views. As well as an impressive fan base on YouTube and Spotify, Natti also boasts 14.8 million followers on Instagram. And, as this new track states, is perhaps why Natti doesn’t “give a f**k about your Instagram”.

Be sure to stream “Instagram” and watch the official video to keep those summer vibes flowing.  Let us know what you think of “Instagram” in the comments! DVLM.lnk.to/Instagram