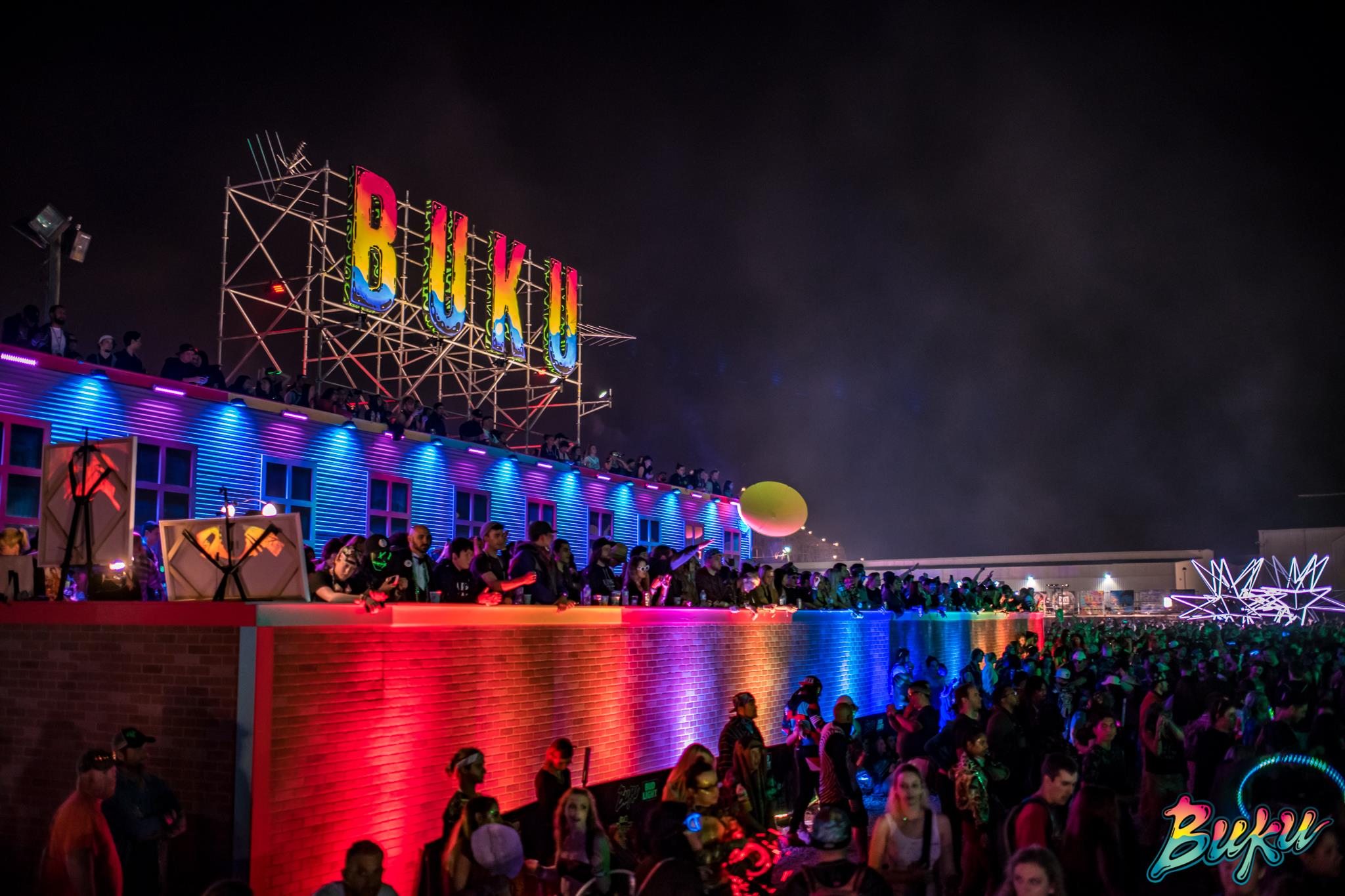 This year’s installment of the BUKU Music & Art Project in New Orleans, Louisiana was the most extravagant up to date. Looking back on its debut seven years ago in 2012, the festival has grown and expanded exponentially, and this year was its largest amplification yet. From the moment we crossed the security gates into the festival, these expansion changes immediately caught our attention. Despite its grand enlargement, those same unique BUKU vibes that are hard to explain unless you’ve witnessed this majestic festival yourself still lingered thoroughly throughout the entire course of the weekend.

Located at Mardi Gras World in the Port of New Orleans, BUKU’s ambience is one of a kind. The location itself already incorporates all of the culture, spirit, soul, and musical affection that the city of New Orleans is all about into the festival’s atmosphere. With the Mississippi river on one side and the heart of New Orleans’s French Quarter on another, BUKU Music & Art Project is organically a soul-filled festival for music and art aficionados nationwide.

Both days of this thrilling music festival consisted of astonishing musical performances, art expositions, local and ethnic food and beverage vendors, and mystical clothing and accessory wear pop-up shops. Unlike any other festival, BUKU Music & Art Project has it all. Everywhere we lingered, art and music surrounded us and nothing but smiles and laughter progressed in the background throughout the entire weekend. Whether surrounded by full-of-life strangers in the massive festival stage crowds or exploring new sites throughout the festival grounds, BUKU was nothing short of high-spirits and positive energy.

Not to mention that the festival’s music performances incorporated such a wide array of genres and music subcultures, from hip-hop to R&B, from alternative to heavy rock/metal, and from techno-house to heavy drum & bass electronic music. This year’s massive lineup consisted of some of the most prodigious names in the music industry featuring headliners Bassnectar, Migos, MGMT, SZA, Virtual Self, Illenium, A Day To Remember, Isaiah Rashad, Alison Wonderland, and many others. These headlining artist names themselves and the different genres that they each represent undeniably demonstrate the diversity of the festival’s internal culture, and we’ve never witnessed such a distinctive group of individuals coexist as one within one place.

BUKU’s extraordinary potential manifested itself more than ever before with its 2018 enlargement. The festival’s expansion plan introduced a more spacious open lot where the Power Plant – the festival’s “main stage” is located – to accommodate attendees more effectively. The Power Plant features some of the most breathtaking views of New Orleans’s iridescent skies during sunset, which we got the privilege to witness during Illenium’s Awake Live set on day two. It was absolutely magical. Other memorable moments at The Power Plant included Gryffin’s spontaneous grand appearance when Lil Uzi Vert decided not to show up, and Bassnectar slaying the crowd as he closed off the the weekend entirely with back to back bangers.

Within these same grounds, the Front Yard Showcases featuring local artists were dispersed throughout, and a new open VIP Rooftop viewing area was built to improvise last year’s VIP S.S. BUKU, which unfortunately didn’t make it to this installment due to safety concerns. Not to mention some more “down time” areas featuring nets and hammocks surrounded by lit nature-like ornaments where attendees could relax and recover from one performance to the next. This area alone seemed like a separate entity from the rest of the festival, making it that much more extensive this time around.

On the journey to the rest of the festival’s amenities, the first encounter is the newly installed Wharf Stage, which is a similar replica of the previous years’ Back Alley (now a purely VIP stage). The Wharf Stage stands right alongside a striking view of the Mississippi River, inducing its attendees’ outdoor live music experience both day and night, and featured acts from energy-enhancing artists like Bonobo, Green Velvet, Walker & Royce, Snakehips and many others. To the left is the Ballroom, an enclosed stage similar to that of your typical picturesque music hall, which featured killer acts from artists like Elohim, Sylvan Esso, Little Dragon, and Mura Masa.

Last but not least, we ventured into the Float Den, which is the other enclosed stage within BUKU’s festival grounds. The Float Den features that old-school warehouse rave atmosphere we’re all fond of, in which different Mardi Gras inspired floats are dispersed throughout and shimmering laser beams flash nonstop, making it feel like a night-time rager all day long. This year’s installment of the Float Den featured all sorts of acts and genres, and each set brought a completely explicit vibe despite being in the same enclosed environment. Out of them all, Boogie T b2b Ganja White Night, Alison Wonderland, Virtual Self,  Hippie Sabotage, and Rezz completely slayed the underground warehouse ambiance throughout the weekend.

At BUKU Music & Art Project, you will lose yourself and you will find yourself simultaneously. It’s a place where souls can wander off and explore new artistic grounds and experience feelings of unexplored happiness and musical stimulation never witnessed before. It’s a place where music, art, and vibes coincide for 48 hours – a place we wish we never had to depart from. Merci BUKU, and thank you for kicking off festival season in the most magical way possible. We can’t wait to return next year!