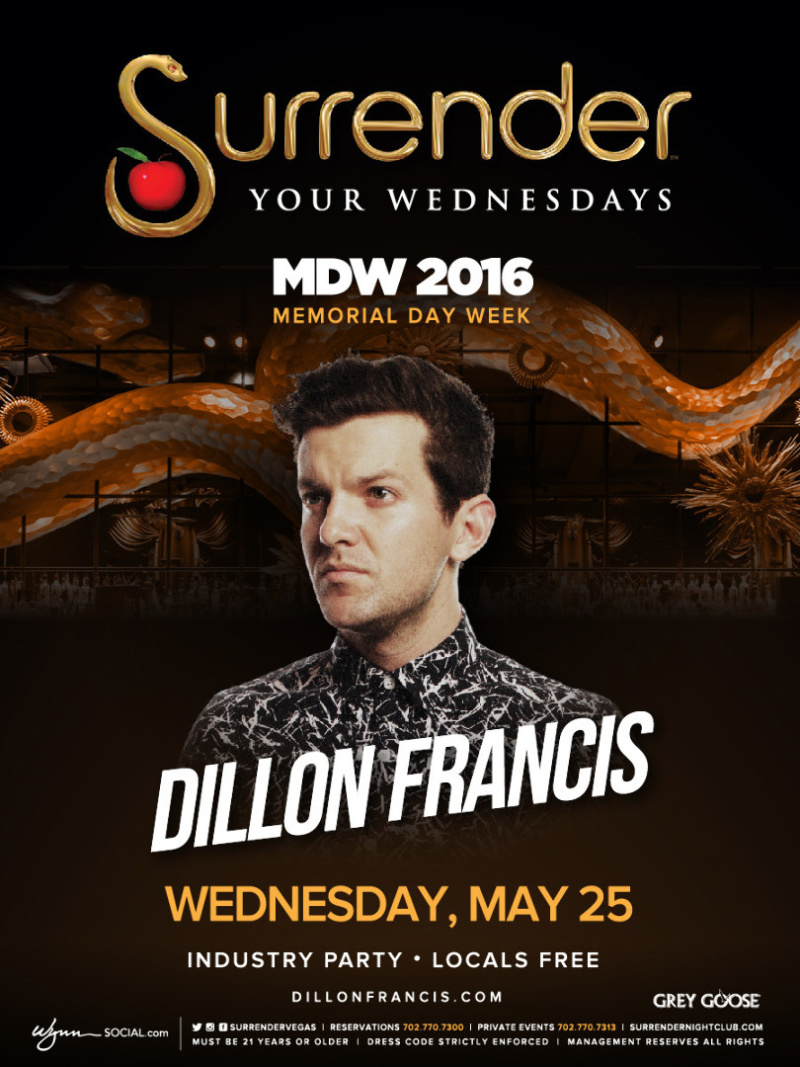 Dillon Francis at Surrender Nightclub on Wednesday, May 25, 2016

Surrender Your Wednesday’s with Dillon Francis to kick-start Memorial Day Weekend in Las Vegas on Wednesday, May 25, 2016. Returning to Encore at the Wynn Las Vegas, famed producer and DJ Dillon Francis will deliver an electric and energetic beginning to a week-long string of high caliber events hitting Sin City.

Dillon Francis has become a familiar name among electronic dance music (EDM) enthusiasts for his lead singles: “Get Low” with DJ Snake; “When We Were Young” with Sultan + Ned Shepard feat. The Chain Gang of 1974; “Bruk Bruk (I Need Your Lovin);” “We Make It Bounce” with Major Lazer & Stylo G; and his 2016 Kygo collaboration, “Coming Over” feat. James Hersey. His 2014 debut studio album, Money Sucks, Friends Rule, was released through Columbia Records and was followed by his This Mixtape Is Fire EP, which dropped in 2015.

Join the superstar electronic music sensation for a high octane performance at the indoor/outdoor Surrender Nightclub at Encore at the Wynn Las Vegas for the start of MDW 2016.

Tickets for Dillon Francis at Surrender Nightclub on May 25, 2016 are available HERE.

For more information on Surrender Nightclub and for an calendar of upcoming events calendar, visit http://surrendernightclub.com/calendar.

Calvin Harris at Omnia Nightclub at Caesars Palace on Friday, May 27