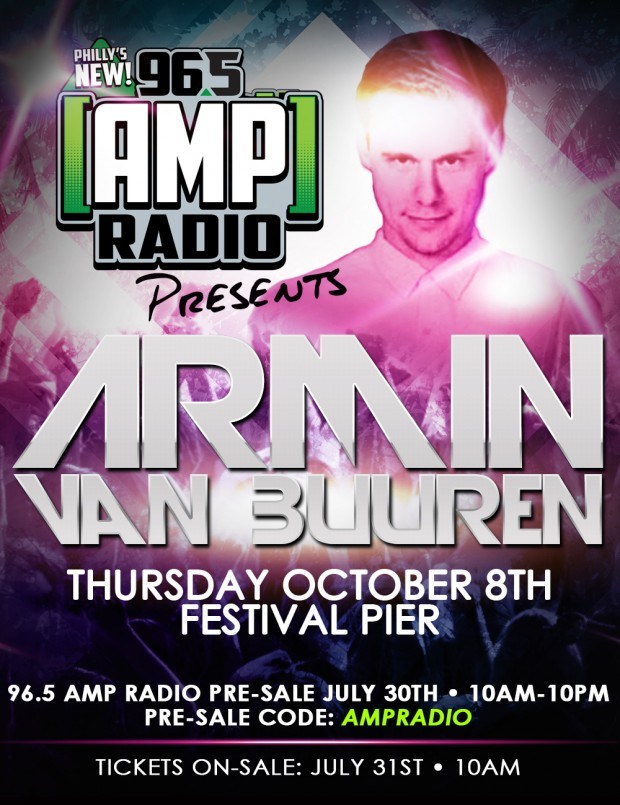 Making his triumphant return to the city of brotherly love, Armin van Buuren is bringing his trance festivities to Philadelphia’s Festival Pier at Penn’s Landing. On Thursday, October 8, 2015, 96.5 Amp Radio presents one of the most highly anticipated parties Philly has seen since the Grammy Award-nominated DJ graced the same stage during his “Intense Tour” in 2013. Tropical house phenomenon Kygo has been announced as the supporting act for the Oct. 8 event.

While still in the midst of his massive summer tour, Armin fulfills his mission of taking fans into “A State of Trance” whether at the world’s largest festival or on the magical island of Ibiza. The legendary performance will surely include Armin’s signature production unlike anything you’ve seen before—and won’t see anywhere else.

Tickets for this trance event go on sale to the public, this Friday July 31 at 10am. There will also be an Amp Radio pre-sale on July 30th from 10am – 10pm. Use the code – AMPRADIO to get your tickets first and ensure you are in the presence of dance music royalty this October. More pre-sale information can be found HERE.

Check this space for details and more information as its announced.

Ladies of Trance Lands at Pachita NYC on Sept. 19