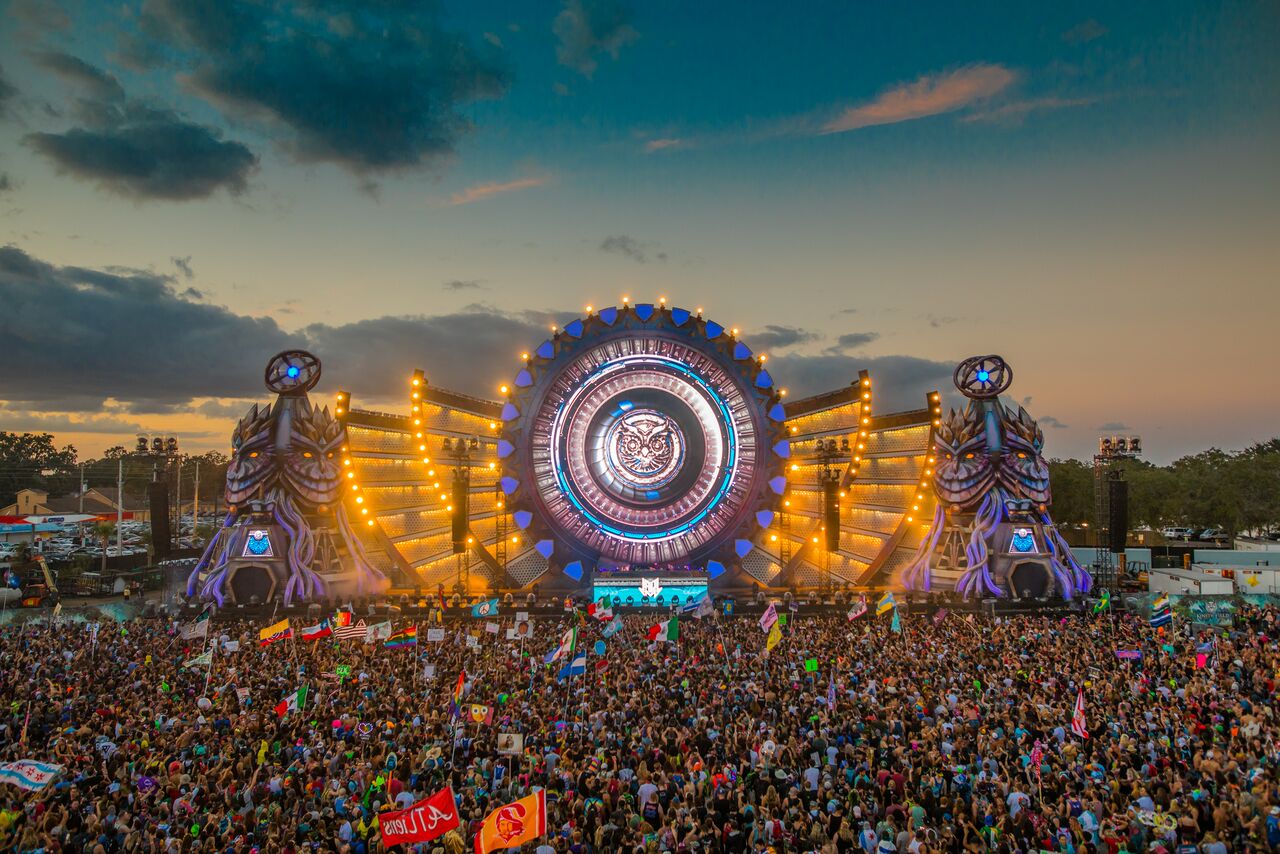 This year’s Electric Daisy Carnival Orlando united over 60 world-renowned artists and more than 75,000 ecstatic fans from all across the globe. This was EDC Orlando’s largest audience yet, and first-ever sold out crowd. Boasting three incredible new stage designs, mind-blowing visuals, theatrical performers, and dozens of unforgettable sets, this turned out to be the ultimate celebration of love, peace, and happiness.

Fans entered Tinker Field through pathways of giant daisies and walked through glowing neon tunnels around the swan-filled lake. Stunning lights and vibrant color surrounded the grounds, transforming the space into a beautiful marriage of nature and technology.  Different carnival rides like swings and the LED-lit Dream Wheel allowed guests to view EDC from an above perspective, while the 300-foot-long zip line brought them zooming over the gleaming Lake Beardall.

The three innovative stage designs really stole the show though. Fans were in awe beginning with neonGARDEN, this year set inside a 150-foot long circus tent. Just beyond the lake, this stage was booming with energy as Friday brought Insomniac’s trance brand, Dreamstate, to life with epic performances by Markus Schulz, Ferry Corsten presents Gouryella, and Cosmic Gate. Saturday brought in some deep house and techno from Jamie Jones, Nicole Moudaber, and Mark Knight B2B Chus & Ceballos.

Across Lake Beardall headliners went crazy over the never-before seen design at circuitGROUNDS. A massive 360-degree stage design encompassed not only fans but immensely high levels of bass. The largest production stage to appear at EDC Orlando, this measured 160-feet in diameter and included six gigantic LED-lit pods and over 1,000 pyrotechnic units. Super popular acts such as Bassnectar, Alison Wonderland, Nero, Nightmre, 12th Planet and Keys N Krates blew the minds of guests as they were hit from all angles by lights, fire, lasers, and bass.

After it’s jaw-dropping debut this year at EDC Las Vegas, the kineticTEMPLE design was reimagined to fit EDC Orlando. Featuring 400 huge video tiles across its 245-foot wide, 80-foot tall footprint, the kineticTEMPLE brought unbelievable visuals, fireworks displays, water fountains, and lasers to match the world-class performances on stage. Fans were in awe on Friday listening to The Chainsmokers play hits like, “Until You Were Gone,” “Circle of Life,” “Mr. Brightside,” “Don’t Let Me Down,” and of course, “Closer.” Saturday night brought an upbeat and loving performance by Axwell, who tugged at fans’ emotions with songs like, “Calling,” “Something New,” “In My Mind,” and Swedish House Mafia’s “Don’t You Worry Child.” Others gracing kineticFIELD were Above & Beyond, Hardwell, Dash Berlin, Jauz and Yellow Claw.

Another new aspect this year was Smirnoff House, which welcomed performances from Nightmre, Markus Schulz, Mark Night, Cocodrills, Chocolate Puma, and more. Smirnoff also showed their love and support for the local community with several performances from talented Pulse Nightclub DJs as a tribute to the happenings earlier this year in Orlando. Fans felt nothing but love and acceptance in this booming house full of beats. Also new this year was Jägermeister’s Haus 56, featuring special cocktails, a slide, and an elevated viewing deck and bar, and Corona Electric Beach which brought fans a true taste of Florida with sun, sand, drinks, and live performances.

This year’s VIP experience included a deck to view kineticFIELD as well as a private dance area at neonGARDEN. Guests were treated to signature cocktails and specialty food selections. Adding to the fun was a glamorous Beauty Bar for festival-goers to touch up, and a body paint booth to add extra flare to their festival looks.

Overall this weekend was filled with nothing but positive vibes, love, and unity amongst all that participated. Insomniac delivered an amazing experience once again, and we cannot wait to see what madness is in store for Orlando next year.