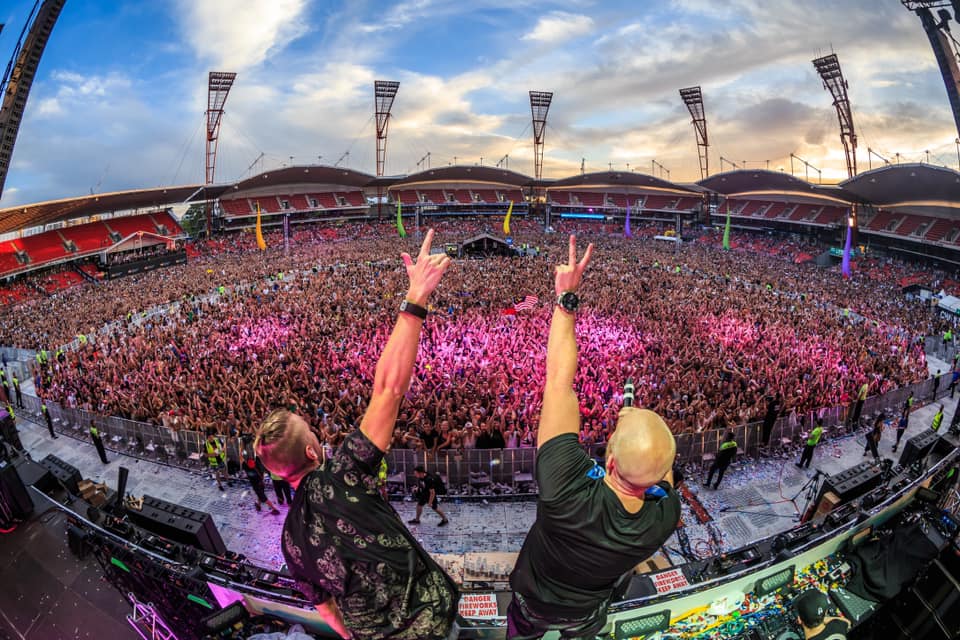 Legendary electronic dance music duo, Showtek, is back on the release radar. This time, with a completely revamped sound in their latest Latin-inspired dance single, “Una Mamacita.” As one of the most highly-acclaimed producer pairs in the game, Showtek once again demonstrates that there is nothing wrong with a bit of sound experimentation after years of top-hit worthy releases.

Out now via Universal Music, “Una Mamacita” features the extraordinary vocal talents of Latin superstars, Belinda and Nacho, which add even more of that exotic flair to the already flaming tune. The upbeat, club-friendly hit kicks off on a more latin-pop infused tone with sensual Spanish lyrics, igniting with with those bouncy dance beats we just cannot get enough of. Showtek’s latest number is not necessarily what fans would typically expect from the pair, but it is a forward-thinking depiction of the duo’s fearless nature and striking evolution as renowned international artists.

It has been roughly two decades since Showtek emerged onto the scene, and throughout that time they have played a tremendous role in revolutionizing electronic dance music as we know it today. Now that an entirely new decade is on the horizon, the influential pair is ready to leave those heavy hardstyle bass drops they are highly recognized for strictly for live performances and festival appearances once they return. But for now, prepare to expect unique, unexplored soundscapes from Showtek’s forthcoming releases. They are ready to thoroughly pursue the urban pop and dance realm of music wholeheartedly.

Read on to learn more in our exclusive interview with Showtek below!

Nocturnal Times: Thanks for having us guys! This year has sure been an interesting one to remember, what were some of the highlights of your 2020 as such a prominent DJ/Producer duo?

Showtek: It has been such a turbulent year for most people, so our highlights are mostly on a personal level. The pandemic hit the entertainment industry hard and we are all just waiting to get back to normal, which is not always easy. Not only for the artists, but for everybody who works in the Music & Entertainment industry. That being said, we had a lot of time to rest up, enjoy personal time, and produce a lot of new music which will result in a new Showtek album in 2021. Being able to have more freedom to make music was something we always struggled with while touring. It almost felt like a luxury to just work whenever we felt creative without being caught up in crazy schedules and sleepless nights.

Nocturnal Times: With live music on halt for the time being, did you find any positive aspects of being able to take a break from touring and performing this year at all?

Showtek: The borders were closed for such a long time and still are, so we had to work from a distance for almost 7 months. This was kind of a challenge, but we have been very productive and motivated to make this work. We finally met in LA met after 7 months of not seeing each other, which was the longest time not being around each other. Sjoerd was also recovering from two intense knee surgeries so he kind of needed the time to get back on his feet as well. He spent the first 6 months of the year at the physiotherapist. Every downside has its upside, and this year feels like a big reset button, which hopefully results in a better and brighter 2021.

Nocturnal Times: Now that 2020 is coming to a close, what is your main focus in regard to your music career once we step foot into 2021?

Showtek: We are planning to release new music every 4-6 weeks from January 2021, so we can launch our album before the summer of 2021. For the rest, we keep on focusing on our health so when we can back to touring again, we are all ready to go. Hopefully, this will happen in 2021, fingers crossed.

Nocturnal Times: Your second single of the year, “Una Mamacita,” was recently revealed to fans worldwide. What motivated you to drift away from your typical sound and venture into this unique latin-pop dance space?

Showtek: It’s not that we totally want to drift away from what we normally produce; this was just the best direction for the song when we were making it. You get so limited if you only keep working in a certain BPM and sound range, and this was kind of a fun challenge for us. We love the outcome of the song, it’s still dance music but with a different touch. It was received very well by our fans and also by Belinda and Nacho’s fans!

Nocturnal Times: “Una Mamacita” features vocals of widely recognized Latin singers Nacho and Belinda. Why did you choose to collaborate with these two artists in particular?

Showtek: We got in touch with Belinda in 2019 and we played her some song ideas. She loved this demo so much and asked us to work on it together. Belinda is such a big personality in Mexico and we have a huge fanbase in Mexico as well. We thought it would be cool to work together and do something that people wouldn’t really expect us to do. The idea of having Nacho as a feature came from one of the writers and he jumped on the song after.

Nocturnal Times: Were you all able to actually get together to produce the infectious track in the studio or was everything co-created from a distance?

Showtek: The song was written in English (this version will be released later) so we had Yhonny Atella & Ender Thomas rewrite and write some new parts of the song in Spanish.  It sounded amazing but we thought the song would sound better with an additional feature, which is very common in music today, especially in Latin music. We loved the idea of Belinda and Nacho on the song together. Eventually, we recorded everything together in Miami, where we wrote more lyrics on the song together which was a lot of fun! Lastly, we  finalized the production in our studio.

Nocturnal Times: Now that you have showcased your diverse production capabilities to fans, will you continue releasing more singles on this pop-leaning side of the electronic music spectrum?

Showtek: As Showtek, we are kind of all over the place right now, we just love to do whatever we feel like as long as we can keep our signature in our productions. We love to surprise people with something they don’t expect us to do, which is fun to do as artists. It’s easy to go into the studio and always work in the same musical spectrum, but it’s not challenging, and you don’t grow as an artist. Sometimes we produce a song with the thought that the production is the best for the song. We love to evolve and expand our style of music and therefore we really try to experiment.

Nocturnal Times: Will you be exposing more of this innovative sound to fans during your live sets once shows and festivals are back in full force, or will you be sticking to your typical performance sound design?

Showtek: When we perform we always try to bring a high-energy performance, so we might play remixes or bootlegs of the original versions. We still even play hardstyle in our sets, but we rarely produce it. As Showtek we just want to be diverse and represent a wide variety of dance music, but we always deliver when it comes to producing music or performing on stage!

Related Topics:belindanachoshowtekUniversal Music
Up Next

BLR Shows a New Side in “Limbo”